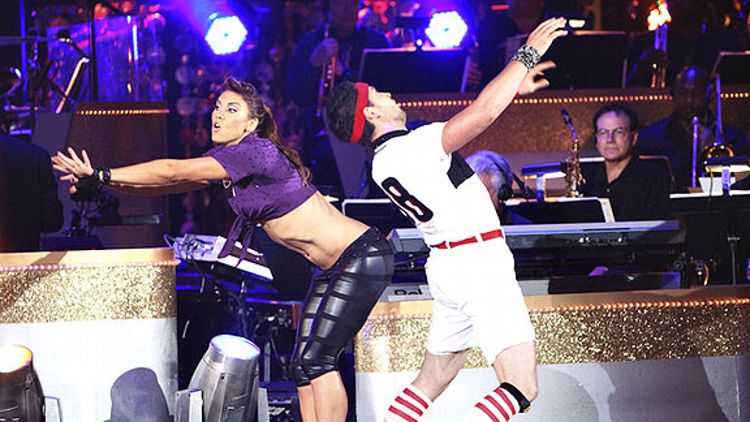 Periodically throughout this season of Dancing With the Stars, we’re checking in with contestant (and U.S. women’s national soccer team goalie) Hope Solo. This week, we spoke with Hope about her most recent performance, Ron Artest’s departure from the show, and Nancy Grace’s wardrobe malfunction.

How do you feel your second performance compared to your first? Did you feel more comfortable?
It’s amazing what two weeks can do for your confidence. I think it’s just learning about how the show is run and learning how to get into character, which has been one of the hardest things for me to do. Obviously I’m not an actor. I’m an athlete and everything I do is very real, so to act in any way has been difficult. Coming into the second round, I just decided to have fun with it. Of course, the choreography was tough. I missed half of a step, so it kind of threw off my timing, which we obviously got penalized for. But for the most part, I was doing well because I came out with confidence, I got into character, and I had fun doing it.

Did you ever anticipate that being an athlete would put you at a disadvantage?

Click here for all of our interviews with fascinating people from the worlds of sports and pop culture.
I’ve said all along that I don’t think athletes have the edge in this competition. Our bodies are trained to do a certain thing precisely, and I’ve been doing that for 20 years. And [on this show] my body is telling me I need to change everything that it was ever trained to do. Athletes have the work rate, we have the endurance, and maybe we have the muscle memory over others. But I really think for non-athletes, when you’re starting fresh, when you’re starting something completely new in how to work the body, it’s almost easier.

Now that Ron Artest is gone, do you sort of feel it’s on you to carry the mantle for the athletes, who as a group have historically done well on the show?
Absolutely not. I was sad to see Ron go because I think us athletes sort of stick together. At the same time, even if he wasn’t on the show, I’ve had the desire to win from the get-go.

When the judges’ scores came down last week, were you pleased? Or do you feel like you left something on the table?
I was really proud of our jive. [My partner] Maksim [Chmerkovskiy] and I have gone back and watched it. We know that it’s hard to come out first, and we also know that there could’ve been some harsh scoring, especially on the first dance. I know Maks wasn’t happy at all, but I’ll take it, because I know I can improve upon it. I’m proud that I went out there with confidence, and I’m proud that I had fun. The choreography wasn’t easy. You look at a lot of the choreography, and ours was very energetic. It was very fast-paced, and I think we entertained the crowd, so I was happy.

You told us a couple weeks ago you thought David Arquette might be the favorite to win the competition. Do you still feel that way?
I think the underdogs are going to start to rise at some point in the competition. I’ve said it all along — it’s not where you start, it’s where you finish. People are going to come out strong at the beginning, and then they’re going to find their weaknesses. Maybe some dances suit some people better. At this point, I think you see potential in everybody.

Where do you feel like you stand right now?
Maks and I are in a really good spot.

Nancy Grace had a slight wardrobe malfunction last week …
That’s what I hear. I didn’t even see it! Nancy laughs and jokes about it, but I think it was made to be more than it really was.

So she was pretty good-natured about it after it happened?
Oh yeah. It was all in fun. I don’t think it was another Super Bowl incident.

After the results show is over, what’s it like to be around everyone? Are the couples that did well noticeably upbeat?
I think everyone’s pretty supportive of one another because we’re all in the same spot. We’re all learning these dances. We’re all working our butts off. You can have a good week one week, and a bad week the next week. If I have a good week, I’m not going to get really excited because you never know what the next week is going to bring. I think for the most we all try to just maintain and be there for one another. It was hard to see Elizabeth and Val go. And I know it was hard for Maks to see his own brother go. The dynamics are a little unpredictable after the results show.

What would you say is the major difference between your soccer training and the preparation you’ve had to do with this?
For the most part, in my goalkeeper training, my hips, my shoulders and my footwork all having to be facing the same direction. If they’re not, you’re not going to be able to push off, to dive, to make saves. My footwork is very lateral and very centered. So that’s what I’ve trained for 20 some odd years to do — to balance myself centrally. With dancing, your weight is always shifted into one foot. I find myself trying to do a step, and keeping my weight on two feet. That’s been hardest.

Filed Under: ABC, Dancing With the Stars, TV, Grantland Q&A

How to Make It In America Season Premiere: A Live-Blog