How to Make It In America Season Premiere: A Live-Blog 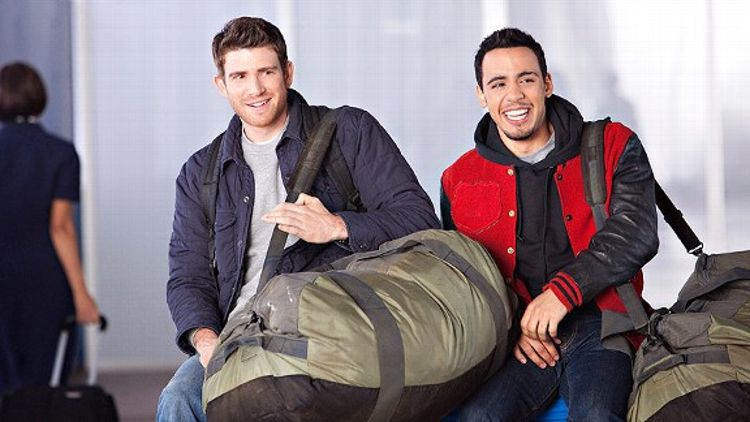 Two facts about the first season of How to Make it in America:

Two facts you should know about me:

1. There is only one show in TV history that I haven’t liked. That show is How I Met Your Mother. It makes me want to throw sharp things at myself.

2. I would nominate myself as the worst TV/Movie critic of all time, unless the topic of discussion is “The 100 worst things about CBS’s critically acclaimed sitcom, How I Met Your Mother.”

For these reasons, instead of giving my opinion on the first episode of Season 2, I’m just going to tell you what went on in my wasteland of a brain for 27 minutes. Trust me, it’s better this way.

0:06: Theme Song, Aloe Blacc “I Need a Dollar”. So good. Makes me almost forgive HBO for a decade of that terrible Entourage theme song (I refuse to link to it. It’s that bad).

1:07: Why are they in Japan? This is How to Make it in America. Actually, scratch that, please say this whole season takes place in Japan. That would be genius. Probably too genius.

2:06: Really, Home Box Office? It took you two full minutes to unleash a topless scene? You’re slipping, my friend. I thought for Season Two you’d incorporate one into the opening credits.

2:46: Yes, Kappo (Eddie Kaye Thomas/Finch) is back. That’s good. But where is Cudi? I was promised significantly more Cudi this season. Where is he?

3:21: Mentioned “Atmos” — first cool NYC reference I picked up on so far. It makes me feel cool when that happens. If I wasn’t watching this alone, I would have said aloud, “Oh Atmos, yeah I’ve been there once. It’s in Harlem. It’s like whatever.”

3:51: Ugh, this party looks so fun. And I think it’s a school night. This is my third year in this wretched city and I’ve yet to find one party on the weekends that equals one of their school-night parties. I hate this show.

5:50: LUIS GUZMAN IS STILL IN THIS SHOW. THEY ARE STILL RUNNING WITH THIS PLOT LINE. UNREAL. My trigger finger to turn back on the Jets game is mighty itchy, HTMIIA.

6:25: Lake Bell’s bangs > Zooey Deschanel’s bangs. This inequality is true for bangs and bangs only. Don’t you dare think I’m hopping off the Z-train.

7:12: Ben: “Yo, it’s gotta be crazy in there.” Bryan Greenberg is starting to dwell in the abyss that is Paul Walker/2 Fast 2 Furious speech. Hey Bryan, I’m invested in your career for some reason, so please don’t end up in that abyss. It’s impossible to get out. Ask Paul.

7:50: “Sure, you [Capo] get us Jigga, and you [Ben] get us Geishas… I’ll reach out to Obama and see if the homie can make it.” Great line No. 1. Somebody hired a writing staff in the off-season.

9:29: Ben and Cudi currently asking a friend to take part in a torture fetish show. She’s offended, but says yes. That’s a real friend (take note, friends who won’t help me move a bed up 3 flights of stairs…this Thursday…at 9pm)

13:40: Ben [on East Village Radio]: “Jay-Z will be in the building.” I think Jay-Z has reached the level of public domain, so it’s completely okay to say something like this. When it’s time to present my thesis in May, I’m putting out a Shawn Carter placard at the roundtable. You just never know.

14:49: OMG I thought Ben’s new girlfriend was Amanda Bynes. After a quick double take, it’s definitely not her, but if it was, that’d be hilarious, since she used to date a certain someone. Speaking of HBO’s brightest star, where is he? It’s been 5 minutes.

16:50: Neanderthals (rival fashion crew): “T-shirts are for kids, we’re trying to get into proper haberdashery.” Great line No. 2. I want to know the genius that thought of this.

21:45: And now they’re running on the tracks. This seems problematic.

22:10 Back at the pop-up shop, Ben’s new and old girlfriends just met. This is too awkward.

22:16: And now they’re taking photobooth pictures together. This show is weird.

23:20: Luis Guzman just told his boys to shoot someone.

25:53: One of Guzman’s goons just pulled out his gun. Goon No. 2 just told him to put it back. He’s SO about to shoot himself, isn’t he? Is he wearing sweatpants in the club? Is he about to Plaxico his leg?

26:37: Ben and Cam finally make it to their event, that has just been broken up by the cops, because the guy Plaxico’d his leg.

27:17: Guy comes over, says he wants to be their sales rep. This is good. Why is my heart racing? Why does this show mess with my emotions like this?

Good start for Ben and Cam, and good start for the show. I’m impressed. If I had to grade it, I’d give it an A+ and 5 out of 5 Rasta Monstas, but don’t forget that my opinion is the opposite of important.

Filed Under: HBO, How to Make It In America, Recaps, TV