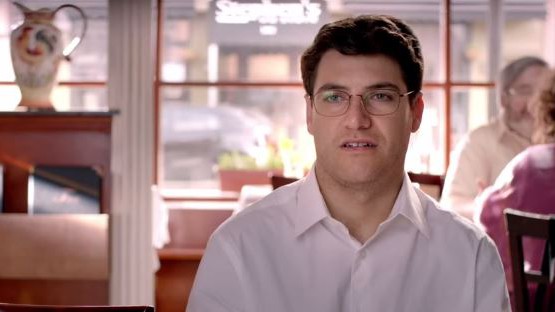 Earlier this week I had a brief phone conversation with Adam Pally, the young man whose prickly charm has been elevating delightful, underseen sitcoms like Happy Endings and The Mindy Project for the last few years. Ostensibly the topic at hand was Slow Learners,1 the new indie rom-com he stars in as a nebbishy high school guidance counselor who decides to spend his summer break striving for, and discomfitingly achieving, sex-forward party-bro status. But things got disjointed more or less off the top, then mostly stayed that way. In the interest of verisimilitude, then, here’s a somewhat edited version of our meandering chat, which touches on his writing, trying to achieve that elusive commercial and artistic balance in his work, his checkered Hebrew school career, and, of course, his excitement for the Kristaps Porzingis era in New York.

Where are you calling from?

I just had a thing at BuzzFeed, where I’m sure they made a bunch of … lists … about me being there. And then I got in the car and now I’m heading back to the Valley to my office to go to work.

You have an office?

I have an office on the Disney2 lot where I write and get high during the day.

What are you writing these days?

There’s nothing really specific yet that I can talk about, but I’m working with a few of my friends who are comedians and kind of matching in with some upper-level showrunners, and trying to take out a bunch of weird pitches. Just trying to sneak things on TV that shouldn’t be on TV.

How long have you been doing that?

About a year. I signed a [development] deal [with ABC] like last August. I have one more year to go before they kick me off the lot.

Have you always written?

I started as a writer. At the Upright Citizens Brigade, I was writing sketches and improvising, and then that led to some shorts, and then people see you, and then pretty soon you’re an actor! I feel like when I say that people get the wrong idea. I went to acting school at the New School, but I was so focused on screenwriting and improv and all that stuff that I didn’t really give a shit and was so bad at my [acting] classes. But, yeah, that’s how it happened.

In your current writing projects, are you envisioning parts for yourself?

I’m always trying to write for myself, but that can be really difficult. Sometimes I have more ethereal ideas, and then if there’s a part for myself that I see, I try to put myself in. But I try not to be greedy as an actor when I’m writing. And I just wrote a movie with my buddy Gil [Ozeri]3 for Will Ferrell and Adam McKay about a bunch of 85-year-olds that we really like. And that was kind of harder to find a part in for me.

It’s about a bunch of 85-year-olds? That’s funny, I just read about that movie Dirty Grandpa with Robert De Niro. I guess old-dude movies are having a moment.

I’m in that shit.

I just realized — I think I read about it because I was on your IMDb. Prepping for this interview.

Wait a minute. You found out about it from reading my IMDb? Then you referenced it in conversation with me? And then you were surprised when I said I was in it?! [Pause.] Are you in an office right now? Are you talking into a shoe? What the fuck is going on!!!

Anyway — you’ve been writing with Gil Ozeri for a while now. How’d you guys start working together?

I was unlucky enough to pick up Gil as a writing partner in New York, when we were all at UCB just kind of bumming around. You know, like minds: He’s a Jewish kid from Queens, I’m from New Jersey. And we had a third buddy, Ben Schwartz, who’s now on one of those shows … House of something … I forget what it’s called.4 And the three of us were just inseparable at UCB, writing sketches and putting shows up every Friday night. And then Ben went on to do huge, huge stuff, like being the eighth recurring [character] on Parks and Rec. And Gil and I started writing movies.

After all this time working together, do you have an easy rhythm to it?

I was reading an interview with you from a few years back where you said you were hoping to do more leading-man stuff and more dramatic stuff. Now, along with Slow Learners, you have a drama called Night Owls. Look, you achieved your dreams!

You make it sound like The Secret. Basically, I was lucky enough after Happy Endings was canceled to be given a job really quickly by Mindy [Kaling]. And when she hired me, she knew it was just for a short amount of time. And during that time I was able to focus on a couple of genres I wanted to try — I wanted to try a romantic comedy, and I wanted to do a drama. And the only way to do them is to do them independently. I kind of took that year I was on The Mindy Project to figure it out. I haven’t made any money doing it, but I feel like that will come later. I’m still learning how to make a movie and get it out there and have it be funny.

So you have these movies out or coming out, and you have the TV experience in the bag, and you’re looking to move forward with a few other projects, but how conscious are you of what you want the next few years of your career to look like?

I try to do different things, as much as I can. I feel like every actor, there’s a limited number of tricks and go-tos. The real good stuff you can’t get to unless it’s something you haven’t done before. So I try to make sure each thing is slightly different. Unless it’s for the money. Then I don’t care.

You’re 33. It feels like you have a while to figure out leading-man stuff. Partially that’s because, and I don’t mean this to be offensive, but you’re not banking on your looks.

Ha, no, no, no! I just mean you’re not tied to any particular image. You’re not trying to be some young hip guy or anything like that.

I think what you’re saying is, “You’re not a woman.” Which is horribly offensive, Amos! I do feel pressure. Anybody who is my age, who is married with kids, feels pressure. A lot of my friends are starting to get married and have a family and everyone has that sense: Well, I gotta take care of my family. But I’m also lucky enough to have a wife who supports me and lets me do dumb shit. My life goal is to find a nice balance between working for money and working for fulfillment.

When you guest-hosted The Late Late Show, a lot of people responded positively to how tossed-off it was. It had the feeling that it was almost something like a personal challenge. To go up on a big stage, purposefully underprepared. To keep yourself on your toes, basically. Is that what you were trying to do? Scare yourself?

I was at UCB for so long, trudging it out and learning to make mistakes. I’ve bombed on stage millions and millions of times. And that’s part of it. You go up with a half-baked idea and you bomb and so what? Nothing bad happens if you bomb. It enables you to have that confidence. You need to summon it from somewhere.

In another interview of yours, you mention that you “spend money like an NBA lottery pick.” Any recent dumb expenditures you wanna disclose?

If I have a free minute, I’m looking for a way to burn money. I don’t get it. I wasn’t raised that way. I wonder why that’s happened. [Pause.] Whatever. I won’t address it and hope it’s nothing. And the dumbest thing I spent money on recently … Ummm. I mean, I joined Tidal.

That’s without a doubt the best possible answer to that question. Speaking of the NBA, you’re a Knicks fan. Wanna talk Porzingis real quick?

Fuck yeah. This is the best time of year to be a Knicks fan. Like, training camp hasn’t started so you don’t have any realistic expectations. [Porzingis] does look like a beast, though. He does look like a beast. Look, I think Phil’s doing a good job. I think it’s a harder job than he envisioned himself having. You gotta give it up, though — Porzingis looks like a beast!

Have you seen that video of him working out with Carmelo? Where is Carmelo’s gym? It looks like he practices in the Forum Shops of Caesar’s Palace.

Are you typing this? You’re not recording?

Yeah, I’m just typing. That way I don’t have to transcribe later. Usually I’m quick enough but I feel like you’re talking too fast.

Also you mentioned the IMDb before. I feel like you’re also surfing the Net.

OK, let me just explain that again real quick. I went on IMDb this morning to prep, and it’s been hours since then, so …

Wait, you just started prepping when you got to work?

No, it’s not! Are you kidding me?! I had a meeting earlier this morning. I had to read for these people. I had to audition! And you know when I started prepping?

Friday, Amos! Because I knew when I woke up Monday morning, I’d be all out of it from the weekend.

I see. Thank you. I’m learning a lot. Also, thank you for saying my name with the proper Israeli pronunciation. Most people say it like “Famous Amos.”

Yeah, I speak Hebrew. Well, poorly. I was also expelled at 12.

What’d you do to the tefillin?!!

Ehhh. I wrapped it around a pipe and I was like, swinging around on it.

That is incredible. Did the tefillin hold you up?

[Pause.] That’s a story for another time.

Side 1, Track 1: ‘Straight Outta Compton’ and the Best First Songs Ever