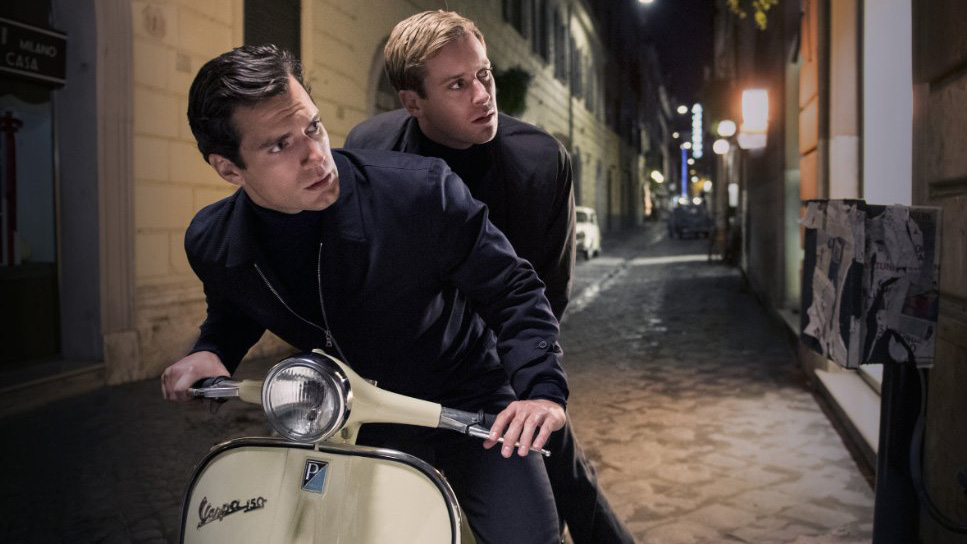 The Man From U.N.C.L.E., directed by Guy Ritchie

Every so often a widget escapes from the factory. It resembles everything else on the assembly line, but it’s got an extra coat of paint. The wood’s a higher quality than is usual. You enjoy playing with it. It seems to be playing with you. That’s the kind of widget The Man From U.N.C.L.E. is: so good it’s practically defective.

This wasn’t something I wanted to see. The posters promise Armie Hammer and Henry Cavill, two actors who are like day-old bread. You practically have to give them away. They look like they’ve been attacked by a stylist from the fall issue of any men’s magazine. Down at the bottom of the poster, standing in front of an Aston Martin and looking like a flight attendant vacationing in a Paul Bowles novel, is Alicia Vikander, a Swede who’ll be shoved in our faces until we love her. Also, and not for nothing: This is a remake of a spy show that ran for four seasons on NBC near the height of the Cold War, a film version of which has been failing to launch for decades. Exactly no one was asking for this.

So it’s a surprise to discover that the bar for this movie is low enough to conga under. Ritchie has gotten everyone to agree not to take any of this seriously, including the person responsible for keeping an eye on Hammer’s Russian accent. Only the costume and art departments get to keep a straight face. But that’s Ritchie for you: maker of movies you hate yourself for wanting to wear.

Hammer’s lumbering, short-tempered KGB agent, Illya Kuryakin, gets mixed up with his CIA counterpart, Napoleon Solo (Cavill), and Gaby (Vikander), a German mechanic in East Berlin whose father was a Nazi scientist who was kidnapped to make a nuclear bomb for aristocrats. The movie is set in 1963, and if this all seems ridiculous, there’s a presiding breeziness to it that’s more fun than something this generic should be. The sight of Hammer running after — and catching — a speeding car made me laugh. So did the presumption that Vikander’s being a mechanic also makes her an expert stunt driver (there’s another, inevitable explanation for that) and someone who explains long, montaged backstories, but in subtitled Russian. This movie’s attitude toward information is: Whatever. Let’s go to Italy.

All the homoerotic winking Ritchie is usually too nervous or too borderline anti-gay for is just there on the surface. During a pre-teamwork tussle between Kuryakin and Solo in a men’s bathroom, the Russian says such words as “feed,” “taste,” and “swallow.” It’s juvenile, yes, but it’s also a sign of life. So is a scene in which Solo and Kuryakin stand around a boutique clothier and bicker over whether a Paco Rabanne belt makes sense with a Dior dress.

The soundtrack helps. The movie samples everything from Roberta Flack to Peppino Gagliardi and Ennio Morricone and, on a whim, bleats out what sounds like an Italian-horror-movie score. Ritchie is 46, and maybe he’s tired of trying to prove himself. Even those two Sherlock Holmes movies he made were defensively busy. He seems at home with the shrugging, toylike scope of this one. It’s anti-serious, post-macho smoothness.

Technically, this is another of his caper movies, but it’s sliced thin. He and his editor, James Herbert, know when to cut both for comedy and for cool. Everything about U.N.C.L.E. is relaxed and flagrantly posh, including the villainy, largely represented by Elizabeth Debicki, a lithe blonde from Australia who can wear a dress without coming off as a mannequin. The clothes seem to empower the acting. The movies should be forcing her, instead of Vikander, on us. Even with no crosses to double, Debicki always appears to be up to something. There are parts for Jared Harris and, in old-money makeup, Hugh Grant, two actors who might have starred in this movie 20 years ago, but who here are meant to represent wisdom and the passing of time.

Grant’s second-nature suaveness does remind you that Hammer and Cavill might be at the outer limits of their talent here. No one’s working harder at being dazzling than Cavill, and it doesn’t not work. But his wide frame can make a windowpane suit seem like wallpaper. And his approach to comedy is inelegant too. When you think about it, he’s playing the Clark Kent that the Superman movies he’s currently in are too solemn for. But he doesn’t give off much. And Hammer works so hard in everything that you’re too admiring to be embarrassed for him. He’s like an old studio player that way — the Ralph Bellamy of right now. One reason he hasn’t taken over Hollywood is that when the camera gets in tight on his face, there’s nothing there. He’s got Emotox. You watch these two not be George Clooney and Brad Pitt, and it’s rather touching. They shouldn’t work together and yet they do. This is a movie that, if we’re being honest, is Tarantino TV — but Ritchie doesn’t mind. He seems to have said the same thing to this movie that I have. “Uncle.” 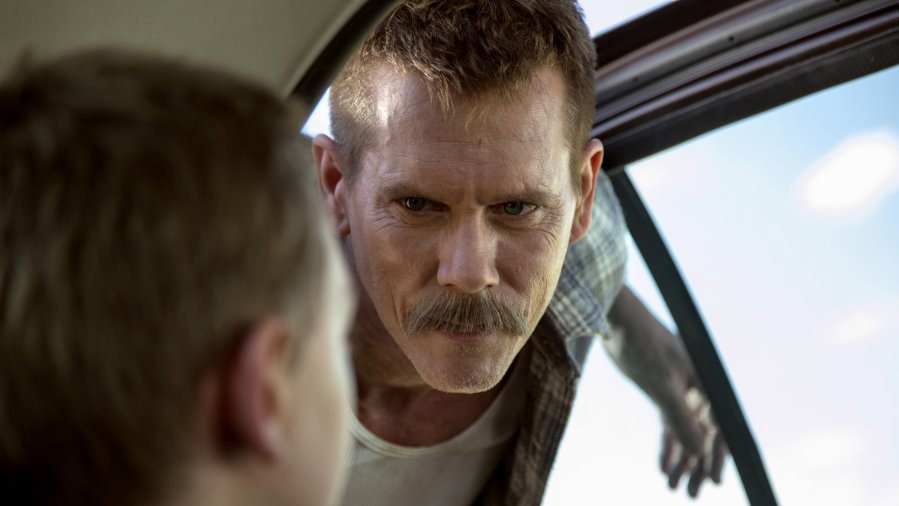 Two Colorado boys (James Freedson-Jackson and Hays Wellford), walking around the woods in search of something to do, happen upon an unattended patrol car. They crouch down and regard it with the tantalizing curiosity you’d save for a superhero or a bear. Each boy runs up and taps the exterior then runs back to his starting position. They work up the nerve to climb inside, where a set of keys have been left in the driver’s seat. What will they say if someone catches them, asks one boy, the nervous one with the shaggy hair and babyface. We’ll say we’re cops, says the other, who’s more confident and whose high-and-tight haircut suggests he’s found his vocation. A joyride ensues, then trouble.

As a woodland lark that darkens into a road thriller, this movie more or less works. It’s simultaneously preposterous and smart. It’s as if Watts, who wrote the film (his first in the U.S.) with Christopher D. Ford, knows the limits of this premise and the limitations of his two young actors (they play 10-year-olds in the movie). So the film gets clever and flashes backward to explain what the cruiser was doing in the middle of the woods. From the car emerges Kevin Bacon, with a graying, rusty mustache and nary a line of dialogue, looking every bit the hypothetical adult outcome of Sam Elliott’s decision to do in vitro with himself. Bacon wears a tank top and a pair of those gravy-brown cop pants. He drags a dead body from the trunk, buries it, and is having a good time overacting what, for about 10 minutes, is basically a silent movie.

He discovers the cruiser’s gone and has to run through the woods and across the plains with cartoonish nuttiness. Evidently, he wasn’t done with his dirty deeds (for instance, there’s heavy weaponry in the back seat). Bacon gets you thinking about something like Raising Arizona, but Watts isn’t the gymnastic hell-raiser the Coens are. The movie does have a way with surprise changes in perspective. Camryn Manheim and Shea Whigham turn up. Whigham actually manages to create a cartoon character that rhymes with the one Bacon’s playing. They both coat their parts with enough menace to make you wonder what passes for good and bad in their world. I wish there were a way for the movie to have explored that, but it’s really hung up on the kids-find-a-cruiser-and-some-guns conceit.

The visual incongruity of two boys speeding down the highway in a cop car and playing with military-grade weapons was probably irresistible. This, of course, is a very different movie if the two Coloradans are black. Then there’s no movie. Watts isn’t frivolous under the circumstances he’s concocted. There are consequences, but they seem disproportionately cruel. He doesn’t know what to do with the mess he’s put these kids in or what it means for them to be there. I wish I could say I’m looking forward to his returning to this idea of self-jeopardizing children in his second film. But it looks like his second film is going to be another helping of Spider-Man. Good for him. Bad for young independent directors. Another one bites the dust.