Viral Video of the Day 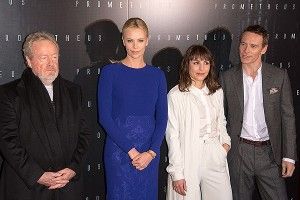 There are about 10,000 awesome actors in Promotheus: How’s a Noomi Rapace supposed to stand out? Rapace — a.k.a. the original Girl With the Dragon Tattoo — appears to have the lead role in this movie, at least from the advanced material (but what do I know? I’ve only seen the trailer, voluntarily or otherwise, a billion times). But between Michael Fassbender’s perfectly creepy android and Idris Elba’s highly questionable Southern accent and, most of all, the mere presence of the guy who played Ryan’s brother on The O.C., Rapace can kind of get lost in the shuffle. Now she’s got her own personalized viral video ad, which would help if it wasn’t, ehh, kind of boring. As scientist Elizabeth Shaw, Rapace attempts to sell an offscreen benefactor on her credentials (whole grip of doctorates, whatever), and her mission: to find what’s out there, to find whether or not we are alone in the universe. All we know so far is that Shaw does get her mission, and that things go pretty awfully wrong. And that, friends, is today’s lesson about the dangers of perseverance.

Filed Under: Viral Video of the Day

More Viral Video of the Day

See all Viral Video of the Day

John Travolta's Secret Sexcapades ... and Other Horror Stories From This Week's Tabloids