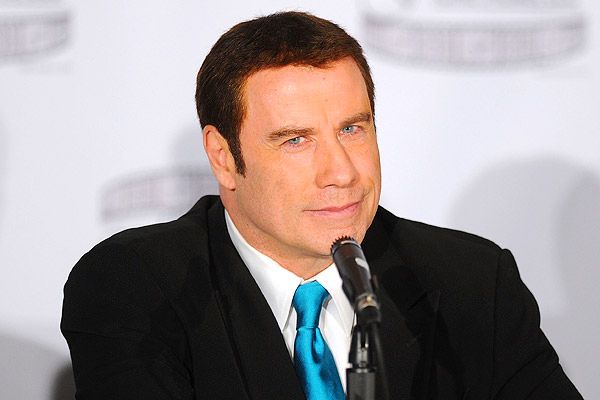 John Travolta’s Secret Life Surprises Kelly Preston: “Kelly was suddenly besieged by the reports of John’s secret sex life.” After their 11-year-old daughter asked what was up, Kelly “fell to the floor in a flood of tears. Suddenly, Kelly feels like she’s been living a lie for two decades, and it’s like a knife to the heart.” The rumors about Travolta “have swarmed around Hollywood since at least 1990, when Paul Barresi, a gay porn star, publicly claimed that he and John were having sex.” As a complete coincidence, Travolta married Preston in 1991 in “a quickie Scientology wedding ceremony.” They signed a contract whose “exact contents are unknown” and “such agreements can contain almost anything — including prohibiting a spouse from speaking publicly about scandals.” Jeff Conaway, who co-starred as Kenickie in Grease alongside Travolta, claims “that John once tried to perform oral sex on him while he slept.” Conaway also says “that Kelly knows that John is gay” and agreed to beard for him, because she “wanted the lifestyle that comes with a marriage to a Hollywood celebrity more than love.”

Justin Timberlake and Jessica Biel: “Jessica likes to pretend that there’s nothing wrong with their relationship.” Ooh, role-play. Sexy. “She only wants to see the Justin she loves — not the one who seems so cavalier about partying with other hot women behind her back.” Hanging around New York recently, they showed up at “a Manhattan hotspot together, and Jessica left after one drink, while Justin stayed behind to make a night of it in the VIP section. It wasn’t long before he was joined by a group of partiers that included pro athletes and a handful of gorgeous women, who showered Justin with attention.” The couple made nice on the Kiss-Cam at the Lakers game, “but that’s his typical modus operandi. Justin will do his own thing, then worm his way back into her heart by playing on her insecurities.” Hard to blame her, as Timberlake consistently does The Worm into all of our hearts no matter how lame he can be.

Ryan Reynolds and Blake Lively: The couple’s “whirlwind eight-month romance has hit a major snag.” That snag is named Tammy Reynolds, and she is Ryan’s mom. “Tammy would like to see Ryan with a woman who’s not in the movie business because she feels that, ultimately, actresses put their careers first.” Cool. Why doesn’t he just marry his mom? “She thinks Blake is pressuring Ryan into settling down before he’s ready. He also rushed into his first marriage, with Scarlett Johansson.” Reynolds is “unofficially engaged” to TV’s Serena van der Woodsen. Blake and Tammy clashed when the couple visited Reynolds’s Canadian hometown. “When Tammy started grilling her, Blake left the room and had a meltdown. She told Ryan she wanted to stay at a hotel for the rest of the trip. Tammy says it proves she’s right: Blake’s a diva. Ryan is torn between them.”

Robert Downey Jr.: “I’ve always felt like an outsider in this industry. Because I’m so insane, I guess.”

Jessica Alba’s Low Self-Esteem: “My breasts are saggy. I’ve got cellulite, my hips are bigger. Every actress out there is more beautiful than me.”

Never Change, Jennifer Love Hewitt: “My hips have always been big. I remember thinking at one point, ‘I know: I’ll get my hips lipo’d off!’ You can’t, it’s bone.”

Shannen Doherty and Tori Spelling: Despite reports of peace in Beverly Hills 90210 land, the former Brenda and Donna are apparently not friends. “They still very much hate one another.” They had a run-in at a Malibu restaurant, where Doherty greeted “her former castmate with the fakest hello ever,” making it clear that “she wants her life to be Tori-free.” Stay out of Malibu, Donna!

Misc/Etc: “Goth gal” “boobs and popcorn will distract any man!” “she’s ready for an adult swim!” “backup dancer Box Man” “like any good California girl, the stunner went blonde” “is it politically correct to say both women look red-hot?” “seducing Bill Murray” “acting like clowns in nightclubs” “he gets annoyed when she turns him down” “flying go-go ballerinas” “being married to Fergie will also add to your street cred” “no good will ever come to a woman who dates a slacker” “bulbous boobs” “I have the biggest toe in the world, and it’s really stupid!” “a self-confessed man slut” “I only fuck supermodels” “classy girls in Christian Louboutins smoking a joint”

Reese Witherspoon’s Dad Is a Bigamist: “Reese Witherspoon raced to Nashville after her mother, Betty, 63, filed a suit against her husband of 42 years, John, 70 — from whom she separated in 1996 — claiming that he committed bigamy by marrying Patricia ‘Tricianne’ Taylor, 60.” Sounds like the setup for a Reese Witherspoon movie where she goes home and learns to appreciate her folksy upbringing! “Betty wrote that after reading about his nuptials in a local paper she confronted John and he ‘said he didn’t know who Tricianne Taylor was.’ She asserts that he suffers from early-onset dementia. Betty — who says she and John split due to his ‘alcoholism, infidelity, overspending, and hoarding’ — also claims Taylor persuaded John to change his will.”

Brooklyn Decker on Her Battleship Co-star Rihanna: “I love her. We are envious of each other’s bodies. We decided that I’m going to borrow her butt for a day and she’s going to borrow my breasts.”

New Mom Selma Blair: “I didn’t realize how the lack of sleep would make me turn 125 years old. I mean, it’s unbelievable how much I look like Truman Capote now.”

Misc/Etc: “She held his head to prevent choking” “aspiring painter” “the old-fashioned way of writing stuff down” “mom-style swimsuits give her the creeps” “ball gowns are my nightmare” “skin-colored panels” “I screamed so much at people, I tore a stomach muscle” “I’d rather swallow a bag of hair” “turned out in a trilby” “this was a girl who once couldn’t make pasta!” “a very ethereal vibe” “he likes that she’s down for whatever” “she only sees him as a friend” “Lindsay Lohan asking the DJ to play unreleased Marilyn Manson tracks” “sweet milky smell” “as long as he remembers I’m the alpha!” “the self-pity can spark eye rolls” “I have the bug!”

Tom Cruise and Katie Holmes: “As Katie Holmes walked around a bustling New York City, she hardly looked like the beaming starlet who accepted Tom Cruise’s romantic marriage proposal just a few years ago.” A witness says, “She looked really tired. She seemed sad.” While Tom promised to help her career, it turns out he meant she should take care of their daughter while he tends to his own celebrity. “Katie thought that being married to a huge star like Tom would open doors for her. But she’s not being offered the roles Tom vowed to get her. This isn’t the life she signed up for, and she feels depressed.” Call up Kelly Preston?

Rihanna and J.R. Smith: “They were very flirty all night and holding hands. She was sitting on his lap and was really into him,” a source says of the twosome spotted at NYC’s Veranda nightclub. “He is the team’s most controversial player, so it’s no wonder that Rihanna likes him.” Riri sure does love bad boys. She has admitted as much, saying “I definitely like high-risk guys. I don’t like cream puff, corny guys … the nice ones that won’t hurt you. I like the edge. That’s the thrill for me.” High risk, high reward? Or endless wells of emotional pain?

Mariah Carey: “I don’t have birthdays. I disregard time.”

Cameron Diaz: “My ass is definitely higher than it was when I was 20.” I bet Cam is, too, owing to advances in marijuana hybrid strains.

Misc/Etc: “He wanted to control her and she wouldn’t let him” “playing with a doll while on a skateboard” “everyone knows you prefer briefs” “Britney will sit there and eat a lollipop and wear a sexy outfit” “sun-smacked” “took her to wild bashes as a child” “shameful family secrets” “Not a single high-end designer would touch her” “He wanted a housewife!” “an X-rated shot at her promiscuity” “seen holding hands and skipping” “doesn’t have a steady guy” “she literally does not eat” “the most chilled-out guy in the world” “shout-out to her Southern California roots” “badass butch” “People think they grow out of high school, but they don’t, even if you’re 45.”

Kourtney Kardashian and Scott Disick: Disick skipped his girlfriend’s baby shower to host a club night in Vegas. “In a recent show of temper, Kourtney snapped and accused Scott of publicly humiliating her by flirting with her younger sister Kim.” Scott deals with conflicts Don Draper–style, by avoiding them. “Every time they have a fight he just walks out on her, sometimes disappearing to Vegas for a couple of days. She feels she can’t rely on him, and there’s a sense he’s just not into getting married anymore.” Scott reportedly “drives his expensive car around Hollywood to meet girls” and mocks Kourtney’s pregnancy weight gain, calling her “Port-ney.” She eats a lot of In-N-Out, suffers from claustrophobia, and “yelled at Scott recently because she couldn’t find her dvd of Eat Pray Love.” Disick agreed to host a Hamptons golf tournament the same day the baby is due. Kourt “went ballistic, crying and accusing him of being the same selfish jerk he always has been.” Scott pulled out of the golf event, but might wish he’d pulled out of Kourtney instead.

An Excerpt From Snooki’s Novel Gorilla Beach: “‘I know brides are supposed to wear white,’ says Giovanna ‘Gia’ Spumanti trying on a wedding dress, ‘But it’d be so much hotter in leopard.'”

Carrie Underwood: “My first stupid purchase was an accident. I was in Paris, in a big, name-brand, fancy-schmancy designer store. I picked up a sweatshirt and maybe I didn’t understand the price tag, but when I went to check out, that sucker was $2,000!” She says she wore the sweatshirt all of twice.

Misc/Etc: “Jen plays a hooker” “could only manage to down a bit of his truffle fries” “Duchess Kate flashes the crowd” “watch out what you run for, you may get it!” “I don’t really know any depressed dogs” “Hopefully her man doesn’t leave her and give her surrogate baby to a bonus mom” “Lots of adults enjoy a fling with a racy book” “We don’t collect porn” “wearing rather dumpy jean shorts and splurging on fat-laden Mexican fare like carne asada and guacamole” “I’m always dating!” “the ultimate single girl” “has published two books and moonlights as a poetry teacher”