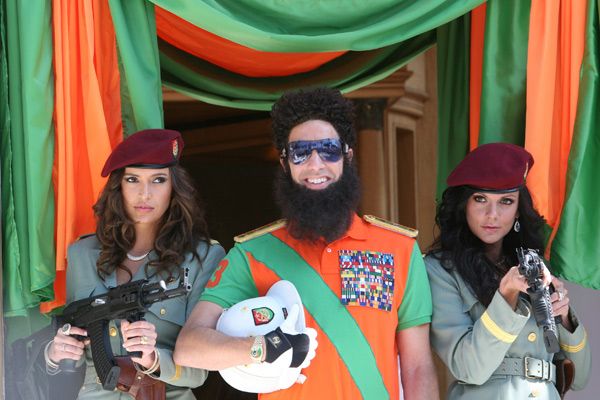 By now, viewers who’ve been following Sacha Baron Cohen’s career over the past decade probably have a feel for his newest, The Dictator, sight unseen. Admiral General Aladeen — perhaps you’ve seen him dumping “ashes” on Ryan Seacrest, or holding the mother of Extra movie-doll Ben Lyons hostage? — as a child, with fulsome pubic hair and a glorious beard. The autocrat Olympics he stages, in which the finish line runs toward him. The first of many celebrity cameos: Megan Fox in the palace of the Mad Dog of Wadiya, hastily putting her clothes back on. (“Katy Perry said she got a diamond Rolex,” Fox says, rummaging through her blood-money sack.)

Fox’s presence is a clue that at least one thing about The Dictator is different. Baron Cohen’s newest is also his first entirely fictional film since the 2002 false start Ali G Indahouse — the one that begins with Baron Cohen’s Ali G break-dancing his way out of a hail of bullets and sort of deteriorates from there. The Dictator is not quite in that zone of B-movie unease, but it’s not Baron Cohen’s best effort, either. It’s funny, but cheap and thin and ultimately not that different than any number of other movies in which Anna Faris plays a slightly dim ingenue, albeit with way more jokes about rape and torture and 9/11. It should do fine, though probably not any better than fine.

What happened to Baron Cohen? It’s worth remembering, now that we seem to be at the end of it, that he had a kind of astonishing run. Da Ali G Show premiered Stateside in 2003 and ran for two seasons on HBO; Borat: Cultural Learnings of America for Make Benefit Glorious Nation of Kazakhstan came in 2006; Brüno, by which time Baron Cohen was so successful that he had to create dozens of shell companies and legal ruses just to book the interviews, was 2009. In between, the actor played a gay French existentialist race car driver and a ring-tailed lemur. He is among the few humans on this planet to have been directed by Martin Scorsese.

Looking back on it, Baron Cohen is probably the comic of the last decade, give or take Will Ferrell. So it’s a melancholy jolt to see him doing comedy as scripted and conventional as delivering Kathryn Hahn’s on-screen child, or staffing the counter at a Park Slope–style vegan grocery store alongside the Zelig of American character actors, Kevin Corrigan, making jokes about lesbians and humane business practices. The moment — that weird exhilarating zone that comedians and rappers and athletes occasionally enter into and then inevitably topple back out of, uncomprehending — seems to have passed him by.

When you watch old clips of Baron Cohen’s Da Ali G Show, what you’re mostly struck by now is everyone’s decency, the way that Ed Meese or Boutros Boutros (“ … Boutros Boutros … ”) Ghali or Steve Kerr will sit gamely in front of a camera and tolerate, deflect, or even gently attempt to educate the foreign gentleman sitting next to them in an XXL Iverson jersey, yammering about God and women and Tupac Shakur.

At the time, it felt revelatory. The idea was that in dragging powerful people down to his genial, foggy level, Ali G might convince the Bishop of Horsham to inadvertently describe God’s corporeal appearance as “sort of Jesus-shaped,” or bait the president of the United Nations into allowing that Arabic is a funny-sounding language. In attempting to understand things beyond his comprehension, Ali G showed how much he didn’t understand anything at all, and so made his interlocutors look good — or, at least, not so bad. Borat and Brüno, the two other characters Baron Cohen featured on Da Ali G Show, were sharper satirical blades. They weren’t just ignorant, they were bigots, and they exposed the same kind of bigotry in the people they encountered — first on the show, and then later in the films that made Baron Cohen such a huge star.

In the handful of interviews Baron Cohen has done as himself in the years since Ali G’s 2004 retirement, the actor has suggested that the character, a “junglist” and rap aficionado from the not-so-mean streets of London’s Staines, began as a satire of his younger self — the one whose break-dancing troupe, Black on White, performed at bar mitzvahs in the ’80s; the middle-class Jewish b-boy who used to look up to the DJ and walking soundboard Tim Westwood, himself the white son of an Anglican bishop and one of hip-hop’s all-time goofiest hangers-on.

Before HBO, Baron Cohen had a show on Britain’s Channel 4, where Ali G wreaked havoc on an English upper class conditioned by hundreds of years of colonial history not to walk away from the savage in front of them, no matter how strangely he was behaving. In America, the show took a more self-critical tone, as upstanding police sheriffs and Sam Donaldson attempted to school this dim foreigner before he hurt himself or someone else. But the gag was more or less the same — everyone was in on the joke, except the person with a microphone in front of his face.

In retrospect, it’s striking what a ’90s project this was — the last gasp of an alternative-minded culture that believed in a sharp divide between a small number of people who were in the know and the vast, ignorant, lamestain mass of everyone else. The show was brilliant because it so effectively corralled the cynicism of the moment under the guise of dim sincerity. (Ali G surely helped invent Stephen Colbert, whose show premiered a year after Da Ali G Show went off the air.) Baron Cohen spoke nonsense to power in a funny accent, and we loved him for it. The joke eventually exhausted itself, though, and so Baron Cohen retired Ali G, right as we, his audience, were retiring the delusion that we were somehow superior to the rest of the big, dumb mid-aughts culture in which we were even then enthusiastically participating.

And then, in 2006, at the height of George W. Bush second-term ennui, Baron Cohen returned, this time as Borat, a Kazakh television reporter arriving in New York with a jar of gypsy tears. In Borat, Baron Cohen went into the weird unknown corners of our country and showed the evil and hatred and racist, RV-riding frat boys who lurked there. He was the laugh track to our own worst fears about ourselves. He smashed up a Confederate memorabilia shop, ran naked, Fear and Loathing–style, through the Mortgage Brokers Banquets of the Deep South. He asked a cowboy with a yellow scarf tied around his neck about homosexuals and was told: “Stay away from them that kiss.”

It was angry comedy for an angry moment, and if it seemed mean-spirited in spots — all those poor etiquette coaches and Hummer salesmen and ministers who spoke in tongues — one look at the rodeo crowds who cheered his suggestion that George Bush “drink the blood of every single man, woman, and child of Iraq” was enough to at least suggest Baron Cohen had his reasons.

Brüno, which came three years later, in 2009, was also astonishingly mean-spirited, but the targets were smaller, pettier, less interesting — stage moms and homophobic hotel security guards and racist fashion designers. Baron Cohen’s attempt to tack away from politics and toward Hollywood and celebrity came well after not only Zoolander and the go-go paparazzi years of the early aughts but also right around the same time as Octomom, the premiere of Jersey Shore, and Mel Gibson’s third or fourth or 15th anti-Semitic meltdown — far more horrific and pointed examples of the weird way our country had become obsessed with fame and narcissism and on-camera humiliation. By this time we knew full well that we were as complicit in the culture Baron Cohen was satirizing as any of the idiots he put on-screen. After all: If we gave Baron Cohen credit for exposing the stupidity and venality of most Americans, didn’t we have to give that same credit to Dane Cook?

So, The Dictator. It’s got some funny moments, and Ben Kingsley in a beret. John C. Reilly plays a fat-faced, widow’s-peaked xenophobe who calls Admiral General Aladeen “Aladdin.” After Aladeen is deposed by his own body double and sent wandering into the borough of Brooklyn, he starts a love affair with Anna Faris’s character, who tells him, by way of establishing her liberal credentials, that she hasn’t had a white boyfriend since high school. The movie’s climactic scene involves a speech imagining America as a dictatorship — 1 percent of the population in charge of all the country’s wealth; a handful of media barons controlling the press; minorities in prison; state-sanctioned torture. You get the idea. “Democracy,” Aladeen says, locking eyes with Faris, “looks like a midget in a chemo wig.”

And The Dictator basically looks like a less craven Adam Sandler movie. It’s not so much bad as indistinguishable, unremarkable. Baron Cohen, who spent the last decade holding up a mirror to American culture, now seems fully enamored with his own reflection — Aladeen is pretty much Borat or Ali G with a bigger beard and professional actors on hand to set him up in the appropriate spots.

At a time when comedians as diverse as Will Ferrell and Louis CK and Kanye West and even Joaquin Phoenix have increasingly striven to eliminate the gap between themselves and the characters they play — ripping open issues of identity and guilt and responsibility, a kind of ontological dive Ali G practically invented — Baron Cohen has somehow gone in the other direction, creating work that has grown increasingly fanciful and less specific. His decision, with The Dictator, to retreat into a character whose regressive behavior and genocidal views can’t possibly rebound onto him is not just relatively cowardly but also tone-deaf, strangely out of time. The man who once meddled with the very fabric of reality now seems like a victim of it, profoundly lost in a moment when all the jokes about foreign invaders have already been made, and the only people worth mocking are ourselves.

Zach Baron’s Google Alerts get really confusing when Sacha Baron Cohen has a new movie out. Find him on Twitter at @xzachbaronx.

The Upfronts: Your Preview of the Best, Worst, and Weirdest New Shows on the Big Four Networks