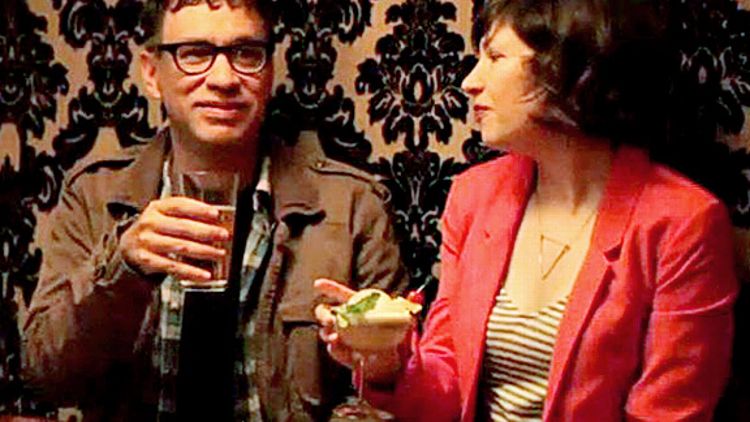 As Portlandia begins its second season tonight, part of me wonders if it is the pinnacle of hipster-bashing video comedy. As a sharable meme, hipster bashing might have outlasted its natural life cycle, but Portlandia continues to provide a high level of cultural commentary thru parody. As much as I’d like to dismiss it, the show doesn’t just say, “Look at these effing hipsters” — it instead makes you wonder, “Will we ever escape from the hipster as a widespread cultural phenomenon [via escaping from ourselves]?”

The Internet has created a high barrier to entry for sketch comedy shows. You have to satisfy old guard standards of ‘authentic sketch comedy’ by being progressive and providing timely cultural commentary, but at the same time, compartmentalize your show into clips that will have viral appeal for both highbrow gatekeepers and the most generalist fans and content farms. It also helps that Fred Armisen and Carrie Brownstein are team players when it comes to effectively commodifying their show into a massive Internet press tour. The city of Portland as a setting compartmentalizes the show, which allows each skit to introduce new themes in appropriate doses. This widened context is a luxury that wannabe viral hipster bashers don’t have.

Every year, we’ll see aspiring viral sensations utilize the keyword ‘hipster’ to try to provide relevant commentary on hipsters in order to rack up views. Do you think Portlandia is the greatest hipster-bashing media of all time? Here are some of the most successful hipster-bashing videos, along with a few Portlandia sketches.

Portlandia Season 1: “Did You Read?”

As a high-level consumer of “high-level cultural commentary from authentic media outlets,” it’s hard not to find the idea of this sketch to be inherently funny. While Portlandia does have high highs and some moderate lows, some of the most lasting memories of the show are the presentation of absurdities accepted as norms in society, not really Mad-TV-ian-specific punch lines or people yelling things loudly. But seriously, did you read the Bill Simmons’ “The Movie Star”?

The Hipster Olympics was uploaded to YouTube in 2007, back when the ‘art’ of hipster bashing was fresh. As an early entrant to the hipster-bashing media vault, the video has an educational appeal, like you could show it to your mom if she asked, “What’s a hipster?” It is interesting to think about how we had an attention span for an eight-minute video with a pretty long narrative back in 2007, but these days even our attention span for viral content has dramatically decreased. Hipster Olympics probably had the biggest chance to actually influence the self-reflective nature of hipsters.

Adding a parody song to a video can increase the virality factor of any video. This slideshow is relatively simple, and even though it gives a UK perspective on hipsters, it still inspired even more views than the Hipster Olympics masterpiece. The video itself chooses to replace the word ‘hipster’ with the term ‘dickhead’ because it was released when ‘hipster hatred’ was hot.

How Much Hipster Can You Pack into a Jazz?

This is actually a commercial for the Honda Jazz, which is a foreign version of the Honda Fit. Both are basically one of those hatchback compact cars that is marketed to ‘cool, young people.’ Imagine some creative agency pitching this to Honda saying, “We guarantee this will get mad views on YouTube. Guaranteed to go viral. This is the Internet version of grassroots marketing.” Probably should have been the end of hipster bashing.

Confessions of a Hipster

This is the most successful ‘DIY’ hipster-bashing video. A tween girl alone in her room regurgitating some of the angles already presented by hipster videos and Internet media during the formative years of her social identity. It has more views than that Honda Jazz commercial, so maybe Honda should have hired her instead because she wasn’t ‘trying too hard.’

When you read the title, you already know how the sketch is going to go, but it’s still an enjoyable watch. It seems like these days, the most critically acclaimed comedies are built in meta-worlds without low-reaching character acting. Fred Armisen’s delivery and mannerisms are always so funny that it makes you wonder if most SNL skits underutilize his transcendent humor. Maybe we’ll find out that he wasn’t one of the guys who wanted to fight for screen time with the loudest hacks in the SNL writers’ room. It’s refreshing to know that Portlandia has given him an outlet to shine so that he’s not just ‘that guy who used to be on HBO Zone.’

Previously:
What Howard Stern is Doing on America’s Got Talent
Lasting Images From the NBA Lockout
How Is Rihanna Doing This?
Consuming Sports in Our Crowded Meme Economy