‘Parenthood’ Cry of the Week: The Bravermans Welcome You Back With a Classic Cuddle Sesh 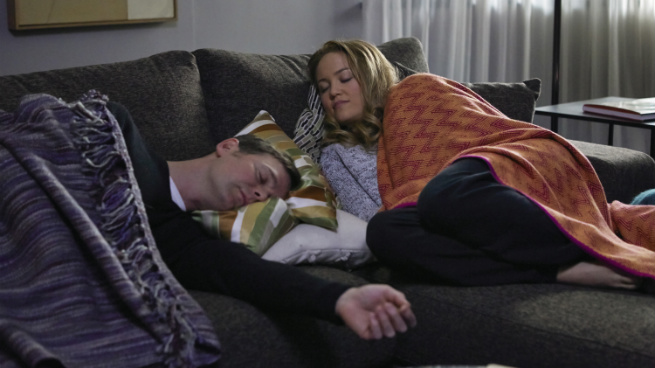 Parenthood returned from its Olympic hiatus last night with an episode that was the perfect reminder of what we’ve been missing in the interim — and really since last season. There were Braverman family hangs aplenty, and, more importantly, a steady emotional escalation and accompanying teary coda. It was near Parenthood perfection.

Here’s what was not perfect: Adam and Kristina’s jaunt up to Mendocino. It looked pleasant (mud baths, hot tub) and they seemed happy (they went on a hike and had sex twice). Did they mention that they won the spa retreat? Who knows and who cares? Adam sneaks off periodically to call Julia because she’s sad right now and Adam is the caretaker. He lies, saying it’s a work thing. Isn’t calling your recently separated sister better than lying about work obligations? The truth was completely valid. Other than to indicate Adam’s concern for his sister, this minor plot line was pointless – unless this is a setup for heartbreak and we’re soon to find out that Kristina’s cancer is back. I would have liked more Amber and less Mendocino.

Occasionally, filling out the four categories is this recap is a stretch. The first half of Parenthood’s fifth season has been frustrating because the central plot is Julia’s separation from Joel, but we have no idea why Joel is so insistent. Yet this week, slogging through a seemingly pointless divorce story line seemed worth it. Because it gave us this clip:

There is nothing better than a Braverman sibling hang. It’s easy to forget that these four have genuine chemistry together since their story lines so frequently lead them away from each other. The similarities between, for example, Sarah and Julia are not quite obvious, but all four together make sense. Adam and Julia are uptight. Crosby and Sarah are the screw-ups with hearts of gold. If you’ve ever wished you had a million brothers and sisters, Parenthod just intensified that wish by 100,000 percent.

The main subplot of the episode was about Drew and his visiting-turned-live-in girlfriend, Amy. Amy quit Tufts, and she probably has not recovered emotionally from the abortion she got last season. Drew dealt with that decision in one of Season 4’s most wrenching scenes: He tells his mom, Sarah, and descends into the kind of hysterics you’d expect. Amy, on the other hand, has yet to tell her parents about pregnancy at all, or that she has essentially dropped out of college.

Last night, Drew convinced her that she needs to confess all to her parents. He dropped her off in front of her parents’ house in a scene that nearly mirrored one from last year. Then, he drove her home following their trip to Planned Parenthood. As her father approached, she brusquely got out of the car and essentially ended her relationship with Drew without talking anything through. This year, they have a final conversation steered by Drew’s steadying wisdom. It’s hard to believe that a male college freshman could have this kind of emotional wherewithal, but let’s just choose to believe that Drew is special. It seems as though the Amy chapter is now closed.

Julia Graham is nothing if not responsible — except for that one time when she failed to file papers at work and suddenly quit, possibly leading to the premature demise of her marriage. Whatever. Of course after killing a few bottles of wine the siblings would all sleep over. Bravermans do not support drinking and driving. The slumber party is slowly revealed as Julia is awoken by a phone call. The sisters are in the big bed, Crosby in the little bed, Adam on the couch. As she moves through the house while comforting Victor on the phone, she stops by each sibling to tuck them in. The size and modernity of the house is more obvious than usual, especially in comparison to the old Braverman manse that she’s describing on the phone. We’re reminded why she felt alone without her kids and the impact of filling the beds. It’s just really fucking emotional.