‘SNL’: The Cameos Outnumber the Cast in the Andy Samberg–Hosted Season Finale 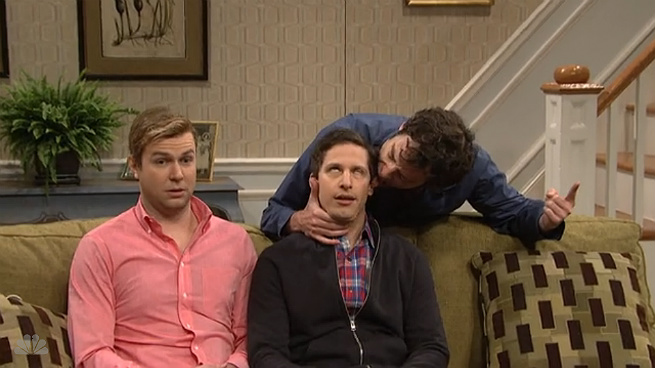 SNL’s last two season finales were mostly notable for the good-byes: Abby Elliott, Kristen Wiig, and Andy Samberg departed after Season 37, and Bill Hader, Fred Armisen, and Jason Sudeikis exited last year. (Tim Robinson, who spent only one season onstage, was ushered off to the writers’ room.) This weekend, Saturday Night Live wrapped up its rocky 39th season by packing the show with so many alumni and special guests that one sketch, a revival of the face-sucking Vogelcheck family, featured only two current cast members. It’s not unusual for a finale to invite a gang of celebrities and departed cast members to help it along, but this time it seemed excessive. It wasn’t a nostalgic celebration of the performers who were wrapping up their tenure at SNL — no exits have been confirmed, yet — but a nostalgic celebration of its own recent past.

Many good things happened this season, including the addition of Sasheer Zamata, the cast’s only black woman. Prior to her arrival, female black characters were given to Kenan Thompson in a wig, or shelved until Maya Rudolph was available for an appearance. The show also added two black women to its writing staff, including Leslie Jones, who appeared on “Weekend Update” earlier this month with a very divisive monologue. Responding to criticism by altering the internal dynamics of the show was crucial, and the conversation sparked by Jones’s bit was important as well. As W. Kamau Bell said in a great response posted after the episode:

… if Leslie Jones had done her bit on “Comic View” or “Def Comedy Jam” or at a random Sunday on Hannibal Buress’ night at The Knitting Factory in Brooklyn — where there are a TON of white people, but the lens through which they watch is BLAAAAAACK! — she would have killed! And she may have been heralded as one of our (black people’s) favorite types of comedians, one who goes there! But because of the venue and the audience, it felt weird. Well, here’s hoping that Leslie Jones continues to make it weird at 30 Rock, because I certainly prefer this take on a black woman and all the “ouch” she brings to Kenan Thompson’s take in assorted wigs and dresses.

Kate McKinnon, Aidy Bryant, and Cecily Strong were all promoted to repertory players this season (with Strong cohosting at the “Update” desk, first with Seth Meyers, then Colin Jost), and all three of them have become standouts, easily filling the gaping stage voids where Wiig, Hader, and Armisen once stood. Unfortunately for the eight featured players (including Jost), it’s been a tough competition for screen time; while Kyle Mooney and Beck Bennett have carved out their own pretaped niche, John Milhiser, Mike O’Brien, Brooks Wheelan, and Noël Wells can get lost in the crowd. Even Mooney and Bennett’s productions have had to compete with comparisons to SNL’s Digital Shorts, and nobody wants to be up against that. During this season’s worst moments, it was enough to make even an optimistic SNL fan into one of those crankypantses who groans that the show ain’t what it used to be. It’s a flawed mentality, because we all view the show through our own nostalgic lenses, but it is possible this season will be remembered more for its controversies than its punch lines. It’s also possible that SNL’s big brass recognize this, and that the cast and crew will undergo huge renovations before the next season starts.

But on Saturday, we looked back instead of forward as Samberg hosted (sadly, without his frequent collaborator Justin Timberlake, who is on tour and could only send him a bird-flipping photo). Samberg reminded us right off the bat that he appeared in more than 100 Digital Shorts and “six live sketches” during his seven years on the cast (“so this is gonna go great”), and to prove himself as an impressionist tried to catch up with Bill Hader by delivering 24 quick-fire impersonations (including Beetlejuice, Zooey Deschanel, the dad from ALF, and Jane’s Addiction by way of the Entourage theme song). Hader, not to be outdone, joined the host and Meyers onstage to reclaim his title, receiving a victory bouquet from Martin Short. By the end of the monologue, we’d seen more alumni (including Rudolph as Beyoncé in the cold open) than current players, and over the course of the episode we’d also see more recurring sketches than fresh ones.

Of the three new sketches, “Camp Wicawabe” was probably the best. (“Confident Hunchback” was fine but not particularly memorable, and “Legolas From The Hobbit Tries to Order at Taco Bell” was about three seconds long and exactly what its title promised.) Cambria (Bryant) and Piper (McKinnon) are just a couple of preteen ne’er-do-wells, sucking on Otter Pops and getting up to no good at summer camp. While their transgressions — swallowing a bee, refusing to eat fruit — have earned them the nickname “two loud little turds” from the counselors, Cambria’s cousin (Samberg) is 14, and instead of eating bugs he’s experimenting with cigarettes (“It didn’t affect me at all, and I ate the whole thing”) and condoms (after finding one in a bunk, he and his friends all tried it on — “It didn’t fit anybody, but it was fun”). Bonus points for the pseudo in-memoriam segment that commemorated all the campers sent home early, especially the little girl who could poop only at home.

The good news is that there were two Digital Shorts, but the bad news is that I wish there had been one really great Digital Short. I didn’t dislike either of these — though it did feel almost criminal that Timberlake wasn’t available — but it feels like we’ve moved beyond them. Try as we might, we can’t put the dick back in the box. In “When Will the Bass Drop?” Samberg plays DJ Davvincii, flirting with the bass button while playing Jenga, sketching a self-portrait, and futzing with a model train (Lil Jon has a brief cameo, so add that to your tally). When the bass does finally drop, well, it’s the logical conclusion to this. “Hugs” reunites the Lonely Island and features Pharrell, Orphan Black’s Tatiana Maslany, and Rudolph again (as Oprah, selling drugs) to pay homage to embracement lotharios (“Hug so many ladies, arms shaky and shit”).

Do you remember the Vogelchecks? Of course you do: They’re the incestuous family that stays together because they make out together. This was the biggest reunion of the night: Wiig, Rudolph, Armisen, and Hader put on their spit guards once again, and Paul Rudd is there, too. (He also popped by “Weekend Update” for an “In the Cage” segment with Samberg’s Nicolas Cage and his fantastic prosthetic forehead.) This time, Samberg is the Vogelcheck bringing an innocent bystander into the mix: his boyfriend (Killam). Using the Michael Sam kiss as a hook, the wet willies and motorboating culminate in a shock-induced fainting spell (McKinnon, as Grandma Vogelcheck) that requires a telephone game of mouth-to-mouth resuscitation. Armisen trying to get through his speech about “loving everyone in the world” while the rest of the Vogelchecks relentlessly try to get him to break is what these alumni-heavy sketches are all about.

I’m never one to hate on “Waking Up With Kimye” or the Swarovski girls (this time hawking Bulgari watches, and featuring Wiig and Samberg as a pair of formerly conjoined, mustachioed porn-star twins Tweedle-Dee and Tweedle-Dong — guess which one got the penis?), but even they seem to be running out of gas. Samberg’s Blizzard Man sketch (“I wear a shirt in bed / ’Cause I’ve got Eggo waffle nips”), even though it did include 2 Chainz (2 Chainz for host! 2 Chainz for host!), had very little juice in it when it first appeared, and this time it was running on ether.

SNL is approaching its 40th year (the show will celebrate the occasion with its own three-hour special next February 15), and it has a lot to be proud of, including that it’s seen tougher times before and has managed to bounce back again and again. Maybe this finale had a retrospective quality because the show hasn’t yet decided what its future should look like — and that could be a good thing. Forty Emmys is a lot — the most for any show in TV history, actually — but the best prize still lies in front of the show, not behind. Go get ’em, SNL.