‘SNL’: Andrew ‘Spider-Man’ Garfield Drops In for His Hosting Debut 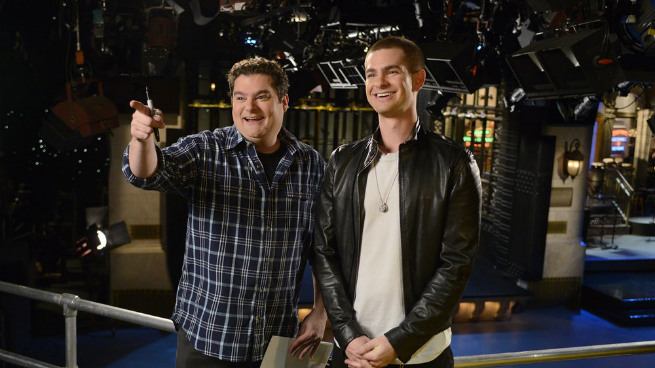 Andrew Garfield, currently promoting The Amazing Spider-Man 2, which appeared in theaters this weekend, hosted SNL for the first time on Saturday. Bringing a lot of bouncy energy (though not a lot of bouncy hair — R.I.P., Hairfield) to what was, again, a mixed bag of material, Garfield was able to buoy some less than stellar sketches (“Wedding”) and proved he was game for anything, even tongue-coupling with musical guest Coldplay’s Chris Martin. I don’t like saying so every week, but just in case you haven’t heard, it’s been a tough season. Despite following a three-week hiatus, this episode felt a little light, even featuring a spoof-ad rerun (hey, at least it was “Bird Bible”). Garfield sat out a good portion of the show — including a three-guest “Weekend Update,” “Bird Bible,” and an ad for Stanx, fart-trapping bike shorts (unfortunately, Stanx was no Fart Patio) — but when he got the chance, he brought a giddy yet controlled excitement to the evening.

Garfield dropped by the studio during girlfriend/costar Emma Stone’s monologue in 2011, appearing to explain to an inverted and web-wristed Andy Samberg that the role of Peter Parker had already been filled. “He’s BRITISH?!” exclaimed Samberg, and this weekend we picked right up where we left off three years ago. Yes, but Garfield was born in Los Angeles before moving across the pond when he was 3, so he is legally obligated to address this confusion immediately, lest anyone’s brain melt into a pile of goo. It wasn’t long before Stone joined him onstage to help calm his nerves and dish out advice (the band laughs at anything, line memorization is useless, be self-deprecating — but maybe not by saying, “Hey, everybody, I’m a terrible father”). The best part was learning about Aidy Bryant’s Amazing Spider-Man 2 cameo as the Statue of Liberty, which is real.

Kenan Thompson’s Steve Harvey has really matured into something beautiful. This week he hosted a musician-themed edition of Celebrity Family Feud with quite a few international and domestic artists. Garfield delivered a Justin Timberlake so good, it stood up proudly next to Kate McKinnon’s Shakira (Harvey likens her to his “car radio when it’s on scan”) and Taran Killam’s masterfully grouchy Russell Crowe, whose band 30 Odd Foot of Grunts could probably sustain a sketch all on its own. Also briefly stealing the limelight were Kyle Mooney as Skrillex, or “Scrickets” to Harvey, and Bryant’s Adele. He was in formidable company, but Garfield was up for the challenge.

I was into the premise of a PBS Masterpiece Theatre presentation of Oliver Twist with Garfield playing a sad orphan, just as I am into Cecily Strong’s toolbox of strange and socially stumbling characters, but this one just didn’t pan out. Interrupting Oliver’s plea for more gruel, Deirdre (Strong) holds out her own bowl while insisting she needs more food because she’s an adult (“That’s just math”), unless the gruel contains booze because her “body will find it, even if it’s just a drop, and that’s a slippery slope.” Garfield’s pitiful Oliver and Strong’s scrappy Deirdre (“this is the year Deirdre whips back, and FYI I whip the face”) weren’t a good match, but I did appreciate that when she wondered aloud why Oliver’s parents gave him up and he explained that “They perished,” she hit back with “Oh, all right. Cool, cool, cool.”

The best spot of the night, and the best pretaped segment in a long time, was a trailer for The Beygency, exploring what happens to an otherwise decent human (Garfield) when he commits the egregious sin of speaking ill of the Queen Bey and becoming “a man who said the unsayable.” No wonder it’s rated NC-17 for “mild language against Beyonce.” From the genius premise to the inclusion of 24’s Mary Lynn Rajskub and Kiefer Sutherland (sporting a Rihanna fan art tattoo) as Garfield’s co-renegades — a handy reminder to watch 24’s ninth-season premiere tonight — it was the kind of sketch that proves how talented the show’s writers still are, even as they work through a rough patch.

Speaking of the writers, one of them joined surly antique critic Jebidiah Atkinson (Killam) and our favorite Russian peasant woman Olya Povlatsky (McKinnon) at the “Weekend Update” desk: “image expert” Leslie Jones, a comedian and writer for the show who delivered a controversial segment during which she claimed that “back in the slave days, [her] love life would have been way better.” It was certainly bold material, and it’s too bad for Jones that it was so divisive that it became a distraction from her talents (I love Big Les). It was certainly uncomfortable at times. Jones published a long response to the outcry on Twitter in which she wrote, “I’m a comic it is my job to take things and make them funny to make you think. Especially the painful things.” I like the addition of stand-up-style guests on the “Update” panel (like Brooks Wheelan’s bits this season), and Jones’s line “Can a bitch get a beef bowl?” was received so warmly that even crankersore Atkinson had to reprise it before he departed the stage and rode his horse back to 1860.

NEXT WEEK: Charlize Theron hosts with musical guest the Black Keys, then it’s off to the finale on May 17 with Andy Samberg and St. Vincent.

Webslinger in Front: How an Infamous Death Transformed the ‘Spider-Man’ Franchise