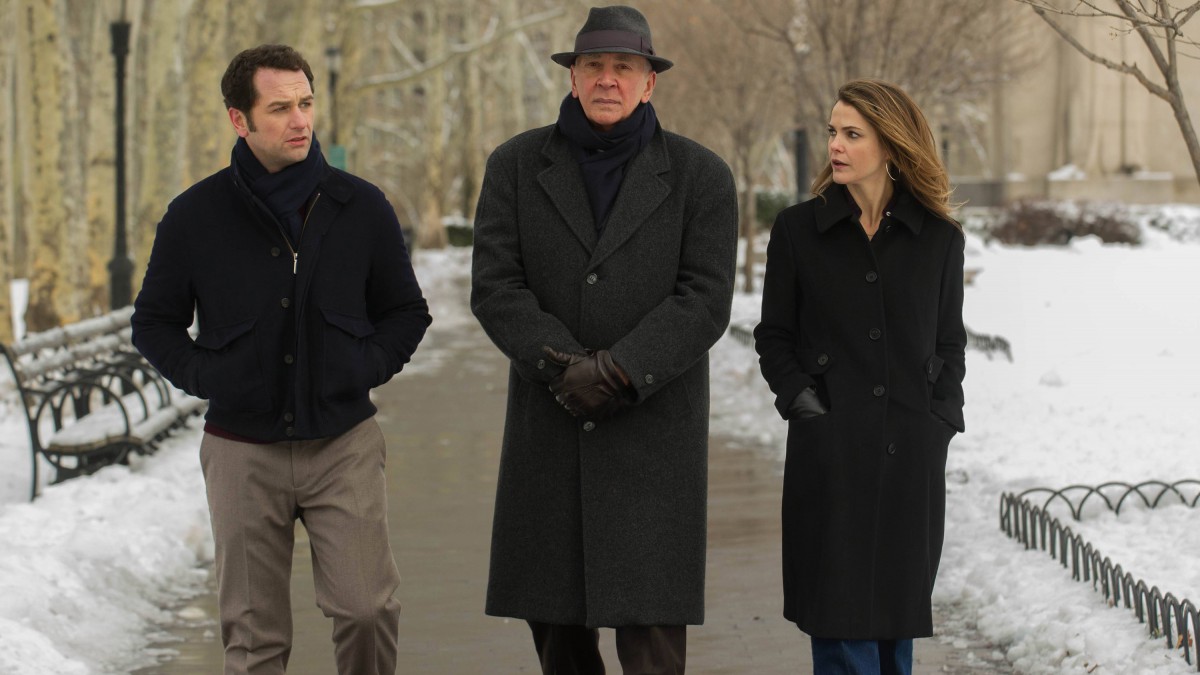 There was a joke last night on The Americans. I don’t blame you if you missed it. Perhaps you were reaching for another slug of vodka to get through the anguish that was just beginning to play out onscreen. But it was there, just the same: a stray bit of clever wordplay, just before the opening credits. It happened when Martha, having chosen a path of open treason against her country rather than admit the more profound betrayal of her heart, poured a glass of Chianti for Clark, her husband and a man who doesn’t exist. “To turning the page!” she declared, without realizing she was toasting the one mission that Philip Jennings would rather die than accomplish. You get it, right? Page/Paige? It was subtle but intentional. A small snifter of humor before the misery returned. A drink before the war.

To say that The Americans has become punishingly grim in its brilliant third season isn’t exactly right. Despite a game of horrific brinksmanship that threatens to overwhelm even the hardiest of fans — one week’s corpse in a suitcase gives way to the next week’s violent dental extraction — watching The Americans never feels like punishment. One can speculate for hours on why this is, exactly (and I have!): How the show’s well of humanity is so deep it can survive all manner of brackish misery poured into it. How the scripts, consistently and with great empathy, make the case that the web of lies required to survive in the modern world is somehow noble, not nihilistic. The more time I spend in the perpetual winter of The Americans — filming in Brookyn in January has its advantages — the more I’ve come to appreciate its profoundly Russian way of looking at the universe. Smarter writers than me have written at length about this Slavic predilection for melancholy. But it was the philosopher Woody Allen who summed it up best with this monologue from his 1975 Czarist comedy Love and Death: “To love is to suffer. To avoid suffering one must not love, but then one suffers from not loving. Therefore, to love is to suffer, not to love is to suffer, to suffer is to suffer.” With a mind-set like that, no wonder they crack eggs into their beers.

More on ‘The Americans’

Rather than treat violence, be it emotional or physical, with a glib wink or a childish shrug, The Americans forces its characters — and, by extension, its audience — to bear witness and suffer the consequences. A gunshot doesn’t solve problems, it creates them — as the blinkered Hans learned last night. And even a heartfelt connection rarely leads to a happy ending, as Elizabeth demonstrated. To accept these rough truths requires looking at the show with unpatriotic eyes. The bulk of American TV, like American mythology, is founded on a much easier conceit: Good vs. Evil. It’s a false binary that finds its way even into shows that aspire toward moral complexity. “I’m not a bad person,” were the first words we heard on AMC’s 2013 misfire Low Winter Sun. “We’re not bad people, we just did a bad thing,” intones the voice-over on Netflix’s new Bloodline. The Americans, by contrast, knows just how futile such declarations are. The lone character ever to noisily insist on his worthiness was preteen Henry Jennings, who, when confronted by his parents over a minor crime last season, shouted, “I’m a good person! I swear! You know that! I’m good!” It was more painful to watch than the moment last week when a guy was doused in gasoline and burned alive. Only a child could think the world was so simple. Only a child could believe that words speak louder than actions.

The people on The Americans aren’t good or bad. They’re just people, which means the morality needle is always spinning. This has led to a series rife with conflict but profoundly wary of resolution. Nearly every great American drama has given its audiences at least the occasional whiff of victory to keep them sweet: Tony Soprano would smile from time to time; McNulty and Bunk would blow out their sorrows on Jameson and beer. It’s a nod to the secret chemistry of all domestic TV: Give them a taste of the good stuff and soon they’ll be hungering for a full meal. The Americans, like a lugubrious Russian thinker, abjures this capitalist system of constant reward. There is no buoyancy to its storytelling, there is little long-term hope. (This is likely why the ratings remain so poor. But never fear: In January, FX boss John Landgraf promised “at least” five seasons, and recent conversations with the network have made it clear to me that he wasn’t lying, numbers be damned.) Call it a downer if you must. To me, it’s oddly liberating. Yes, it’s a show primarily about lying. But to watch The Americans is to be forced to sink deeper and deeper into uncomfortable truths. To borrow a phrase from Betty, the doomed widow in the machine repair shop, it’s impossible to watch this show with even a grain of sugar in your eyes.

I’ve loved The Americans desperately since the very beginning, but I don’t think this full commitment to suffering was on display in Seasons 1 and 2. Early on, showrunners Joe Weisberg and Joel Fields attempted to tell stand-alone spy stories (think “The Clock”) to avoid scaring away those averse to heavy serialization. And last year, the plot engine was primarily fueled by a single mystery and, in the stern visage of Lee Tergesen, a lone antagonist. This third season, by contrast, has been all over the place: to EST meetings and drab hotel suites with Stan, to creepy, new-wave hell with Philip and Kimmy, to squalid Russian prisons with Nina. Like butterfly wings on the other side of the world, the bloodshed in Afghanistan and South Africa has gushed unpleasantly into the frame. And behind it all is the steady backbeat of the season’s presumed A-story: the KGB assessment and recruitment of Paige Jennings, a 16-year-old who, in Christianity, has already found an ideology worth living for. There were a few weeks in the middle of the season when even I began to despair. Had Weisberg and Fields overstuffed their pelmeni? Stan’s dubious defector plot felt miles away from whatever Elizabeth was doing with her liberal Afrikaner, Hans. But last night’s brilliant “Do Mail Robots Dream of Electric Sheep?” set me straight. The Americans, like the Cold War that inspired it, is intentionally diffuse. Progress can’t be tallied in any traditional way. To make sense of something so sweeping and so awful, one is forced to cling to that most fragile of concepts: faith.

That was certainly the only thing that kept Elizabeth’s face from fraying in the office last night, as she bared her soul to Betty without ever losing sight of the fact that soon enough she’d be stopping Betty’s heart. (Keri Russell, always strong, has been especially brilliant this season. She’s like a painter who continues to sacrifice brushes in pursuit of something more pure and more true.) Lois Smith, a titan at age 84, delivered an astonishing performance as Betty.1 Without ever moving from behind a creaking desk, she suffused the screen with the warmth of a life fully lived — and quickly followed it with a sharp chill of fear at the prospect of that life coming to an end. It was easy to see what Betty was to Elizabeth: a maternal figure, a fellow wife, a good soldier stuck on the wrong side of the firing line. But it’s more devastating to think of what Elizabeth was to Betty: a glimpse of what Gil saw on the other side of the world and would never talk about; a fatal, unexpected jolt of the pain she’d spent her life fearing and avoiding. Pill by pill, Betty aquiesced to the inevitable, but not without landing a few blows. It’s the vanity of the ideologue to believe that little deaths add up to something greater, that by sacrificing Betty, Elizabeth was somehow “making the world a better place.” Contra Betty, I don’t think Elizabeth is evil. I think she’s just a fool. The only thing death ever adds up to is death.

And if Elizabeth is a fool, well, then so is everybody, on The Americans of 1983 and wherever it is that we all are in 2015. If there’s been a theme to this remarkable season of television, it’s been compromise. Again and again, we’ve seen the little shortcuts and half-truths these characters have adopted to make what they need sync up with what they want: Stan and Oleg committing a double lutz of treason in order to free the woman they both love; Philip exploiting Kimmy to chase the intimacy he craves from his own daughter; Nina using another woman’s life as a crowbar in an attempt to escape her fate. There’s nothing clean about any of this, nothing particularly admirable. There’s a wide expanse between the war you want to win and the battles you’re forced to fight. Gabriel was talking about love, but his words from last night ring true here as well: Life isn’t planning for bolts of lightning. It’s planting, tilling, and tending. Your fingernails get dirty. Occasionally, so does your soul. The Americans goes to the root of what it means to be human in any era, in any line of work, and tugs. What it unearths isn’t very pretty. But that’s exactly why it needs to be seen.