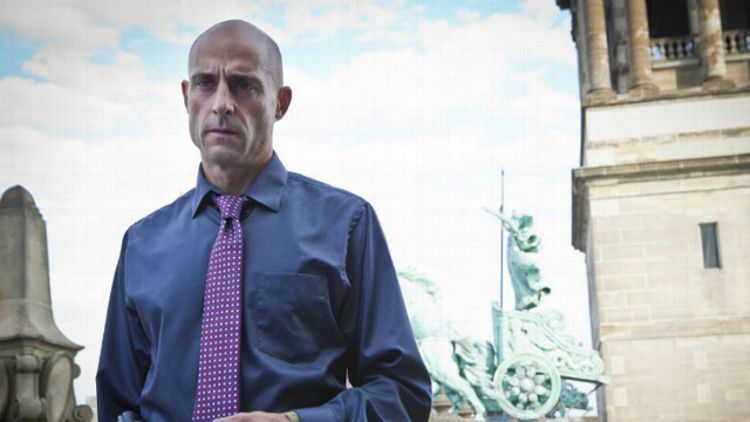 “I’m not a bad person,” Detective Frank Agnew bellows in the opening minutes of Low Winter Sun, just before downing a bottle of whiskey and drowning a fellow cop in a filthy restaurant sink. “There are lines.”

There certainly are, and among those trickiest to navigate are the ones that fall between mood and mawkishness, between sincerity and parody. Low Winter Sun, which, despite all evidence to the contrary, is not meant to be funny, tramples over every single one of them before the first commercial break. Debuting after the return of Breaking Bad this Sunday on AMC, the police drama works best when viewed as a sharp and cutting satire of television’s recent dark, antiheroic age. It’s a swaggering, snarling mess so rife with clichés that one has to believe the majority of them are intentional. Like that poor, doomed cop from the opening, Low Winter Sun plunges us face-first into murky, warmed-over waters where good guys are sometimes bad (and vice versa), women are to be seen and screwed (but never heard), and men, real men, wear hats. Perhaps a coma victim or a dedicated Luddite might be shocked by Low Winter Sun’s cavalier attitude toward violence, the way Agnew — played here, as he was in the 2006 British miniseries from which this was adapted, by the fine British actor Mark Strong — soberly regards himself the next morning in a streaky mirror and the way another cop explains morality as “a damn strobe light flashing back and forth all the time.” The rest of us will most likely be giggling.

Look, there’s no shame in trying to copy a successful formula. It has long been an effective (and profitable!) strategy for everything from cop shows to cronuts. But what rankles — or tickles, depending — is the way AMC has taken a decade’s worth of fine, televised steak and is now attempting to serve us the sorry trimmings. Low Winter Sun has not an ounce of originality or spark. Rather, it clumsily cobbles together a whole host of macho signs and signifiers in the hope that they’ll add up to something more than gunsmoke and other forms of hot air. And to his credit, the dirty laundry list compiled by series adapter (and former Criminal Minds executive producer) Chris Mundy is quite impressive. There are familiar faces cherry-picked from popular shows, including The Wire, Breaking Bad, and The Walking Dead. The story is awash with murder, drugs, and corruption that — wait for it — goes all the way to the top. Men say things like “it had to be done” and tell people not to worry because “it’s not my blood.” Women snort coke supportively and say things like “Baby, no matter how you gotta play it, I don’t waver.” Honestly, Low Winter Sun is the Boston: The Movie of gritty, Golden Age stereotypes.

A lot of this is execution, obviously, but it’s also the material. We TV viewers have been both dazzled and spoiled over the past few years. As a result, there’s no longer anything inherently interesting to be mined from cops bending the law (The Shield did that better), or criminals abiding by a code (The Sopranos, Sons of Anarchy), or the death of modern American cities (The Wire). Tracing Picasso doesn’t make you an artist. By far, the most interesting thing about Low Winter Sun is its setting. Virtuoso director Ernest Dickerson shoots Detroit the way a medical examiner snaps photos at an autopsy; nearly everything, from the abandoned houses to the untended waterfront, appears to be in an advanced state of decay. But, again, there are signs and there are signifiers. Fixating on the peeling wallpaper in the run-down squad room and the barking dogs in the middle of the street doesn’t actually tell us anything about the current plight of one of America’s great cities. It just reminds us that we are in a Tough and Dangerous Place where Anything Can Happen. The collision of law and lawlessness in a bankrupt city is potentially fascinating and a series I’d be eager to watch. The way Low Winter Sun uses its rich setting as a backdrop for little more than impassioned shouting suggests bankruptcy of an entirely creative kind.

I wish I could say the strength of the cast made Low Winter Sun watchable. But in a perverse way the reverse is true. Their actorly commitment — from Strong’s stolid anguish to Ruben Santiago-Hudson’s brusque gravitas — only reveals the cracks all around them. Sure, it’s nice to see James Ransone (Ziggy from The Wire) and David Costabile (Gale Botticher from Breaking Bad) handed meaty parts, as a soulful hothead and a buttoned-up Internal Affairs guy, respectively. But, at least in the early going, their roles are mainly gristle. Most disappointing of all is Lennie James, the British actor who made such an impression in his two appearances as Morgan on The Walking Dead. His cranked-up speechifying proved to be a perfect fit for an overheated zombie dystopia. But here he leaves bite marks all over the scenery. By the end of the first hour it’s hard to tell if James’s potentially crooked Joe Geddes is attempting to prove his innocence or auditioning at the Old Vic. (It doesn’t help James that Geddes and Agnew are meant to be veteran cops but bungle nearly every aspect of their criminal cover-up before either has finished his morning coffee. Gentlemen: less seething, more thinking!)

Still, I am sympathetic to AMC’s reasoning here even as I remain immune to the results. Reaping the rewards of truly original programming means taking the risk of investing in truly original people and ideas. A company with nothing to lose — like, say, AMC in 2007 — can do that with impunity. A company with a teetering creative reputation and a publicly traded stock — like, say, AMC in 2013 — can’t. CBS has been giving its viewers diluted drops of a tired formula for years and has nothing to show for it but billions of dollars in profits and the respect and envy of the industry. With Low Winter Sun, AMC is making a weak bet on the same cynical logic. Just because something is dark doesn’t mean it’s worth the effort of trying to see.