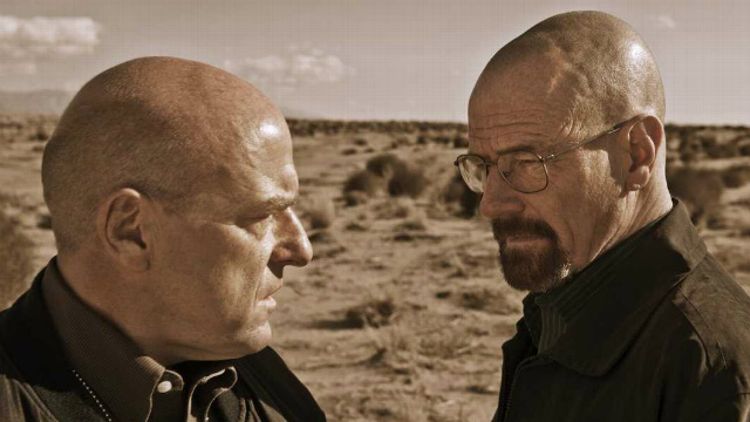 Breaking Bad returns on Sunday. There are only eight more episodes left before the show goes away forever. Yes, we know you know this already. It’s all anyone can talk about, and rightly so. Here’s our precap, featuring some thoughts on the rapidly approaching endgame.

But First, Let’s Get Caught Up. Previously on Breaking Bad:

Andy Greenwald: It’s been a long year since you watched and I recapped “Gliding Over All,” Breaking Bad’s midseason finale. With a return to Albuquerque imminent — though hopefully not aboard a Wayfarer Airlines flight — I’ve put together a refresher on everyone’s whereabouts.

WALTER WHITE: The retired meth kingpin of the Czech Republic is lounging by the pool, surrounded by family, drowning in barbecue and smugness.

“MR. LAMBERT”: One year in the future, Walter White is now undercover as this bearded New Hampshirite. Having returned (?) to the scene of his crimes, he is seen popping pills, buying giant guns, and, most worryingly, ignoring bacon.

SKYLER WHITE: The baroness of Albuquerque’s most oddly profitable car wash is happy to have her family back together, though she still hasn’t replaced any of the household’s many extinguished light bulbs.

HANK SCHRADER: Bullheaded Hank learned years ago to ignore poetry, but when the alternatives for a satisfying — and long-lasting — bathroom read are back issues of Family Circle, you gotta do what you gotta do. His sudden realization that his brother-in-law is the dread Heisenberg suggests a whole series of terrifying questions as to what to do next, the most pressing of which might be: wipe or run?

MARIE SCHRADER: Her happiness over seeing her sister’s family reunited has inspired her to wear yellow for a change. Oh, and to let Walt pour her a third glass of Cupcake Chard. It’s not stealing if someone else is offering!

WALTER WHITE JR.: Furtively amassing what may end up being the world’s largest collection of Mrs. Butterworth erotica.

JESSE PINKMAN: Alone again in his giant, depressing house. Smoking pot, rubbing his eyes, and packing heat in case his old mentor decides to pay another visit. Currently processing the fact that the last time the One Who Knocks knocked, he was there to deliver $5 million, not death.

SAUL GOODMAN: Getting a handy in his office, probably?

TODD ALQUIST: Unclear, but most likely helping his Aryan Brotherhood uncle with the production end of the meth business recently vacated by Walt. Either that or continuing his murder spree throughout the New Mexico desert and, apparently, West Texas.

MIKE EHRMANTRAUT: Currently dissolving in a barrel of acid.

DREW SHARP’S TARANTULA: Still trapped inside a metaphor I mean a glass jar.

THE RICIN CIGARETTE: Tucked away in the White household in the one place no one would ever look: an electrical socket.

THE RUSSIAN FROM “PINE BARRENS”: Let it go. Sometimes art is elliptical.

We’re Done With the Coy Stuff

Emily Yoshida: I learned back in Season 2 that spending any time making any kind of predictions about what will happen on Breaking Bad is the fastest way to realize how much smarter Vince Gilligan & Co. are than you. Still, I’ve got one left for this half-season premiere. We’ve been building up to a Hank vs. Walt showdown forever, and the easiest thing to assume the show would do, or at least the most drawn-out dramatically, is that Hank would not let on that he knows about Walt, and let him enjoy his post–Czech Scarface retirement before he surprise-ambushes him in the finale. But we’ve only got eight episodes left, and everything is fairly tidy right now, which is usually the point at which Gilligan drops the fulminate of mercury and blows everything apart, leaving us with almost too many chaotic, bare wires of plotlines to keep track of and keeping our blood pressure at that sweet spot between “seriously, cut back on the bacon” and cardiac arrest.

So my only prediction for this first episode is that any semblance of a secret life Walt once had is thrown out into the unforgiving New Mexico sun. There will be no more of the coyness that the entire Hank-Walt tension has been built on for the run of the series; Hank will go straight for the throat. As a result, Marie will learn the truth, Walt Jr. will learn the truth, the entire city of Albuquerque will learn the truth. And Walt will escape just in time, buy a million guns and grow some hair, and head for New Hampshire.

Oh, and Walt won’t die. He’ll be put in a Supermax for a life sentence, the only death Walter White would find more humiliating than cancer.

Seven (Half Serious, Half What-the-Hell) Predictions for the Final Episodes

Jonah Keri: 1. Walt lives, escapes Albuquerque, and fulfills the earlier foreshadowing by moving to New Hampshire, and we don’t get full resolution on what happens from there.

2. His baby dies in the crossfire of a climactic shootout.

4. Hank, torn up over his failure to nail Walt, retires and starts a business selling minerals.

5. Jesse gets out of the business forever, but we end up knowing nothing about his fate, other than seeing him drive out of town.

7. Walter Jr. goes to college, gets an MBA, and takes over as CEO of General Mills, ensuring he’ll never lack for cereal as long as he lives.

But Will They Go All the Way?

Klosterman: OK, there’s a scene, I think it was — I’m pretty sure it was in the previous season. It may have even been two seasons ago, but I’m pretty sure it was in the last season, but Walter White goes to see Saul, and he’s looking for something. And I can’t even remember exactly what he’s looking for. If you watched it more recently, you may remember it, and at one point, Saul thinks that everything can collapse, so he’s like, “Look there’s this thing we can do. It’ll cost a lot of money, but I can make you disappear, like you will be gone, and you can’t contact your family, you can’t contact anyone, but you know, there’s no going back if you do this.” And then Walter White was like, “That’s not what I’m here for!” He was like looking for money or looking for a gun or something.

Simmons: Oh. I like how you closed that. You left out something that helps your case. At the beginning of this last half-season, it starts out, remember like somewhere in the future, and he’s —

Klosterman: He’s at a diner.

Simmons: Yeah, and wouldn’t that foreshadow what you’re predicting?

Klosterman: Yes. That’s part of, I mean, I think that’s part of the reason I’m making this prediction. Because he seems to be, if I recall, he’s got a fake ID that says he’s in [New Hampshire].

Klosterman: But here’s the thing — because this is the big thing about the show, and this will probably dictate maybe how it ends up being perceived historically as the greatest show, or among the greatest shows, or a disappointment — on one hand, we place too much emphasis on the endings of TV shows now, and I think that’s a mistake, but that’s how it is. So if he does do this, if I’m right about this, and he disappears, and for whatever reason they just say that’s how it’s ending — he’s gone, he gets away with it, nobody else does — what that will say about the show will be very profound. Whereas if he comes back, if he disappears and decides I can’t do that, I need to go back, and I need to sort of deal with the choices I have made, that’s sort of profound in a different way that’s closer to traditional television, but in some ways, it would be slightly less meaningful.

If this show really ends with like a totally nihilistic view of life, the fact that being the villain, being the worst person is just one of many choices you can make, and the way to succeed, there will be no show that’s ever done that.

Simmons: So in a way, this show is like the Miami Heat heading into the 2013 playoffs. Has a chance to be one of the all-time teams, but there’s also a chance that it could screw it up a little bit here. And maybe play two straight seven-game series and fall down by five in Game 6, 28 seconds left, before miraculously playing on to the title, but still you don’t feel like they’re one of the all-time greats when you watch them.

Klosterman: I suppose that is one potential metaphor, yes.

Simmons: I knew that would bother you.

Klosterman: That can happen, that can happen. My wife, she’s a TV critic for Entertainment Weekly, she thinks that could happen. I think that what she’s hoping will happen is that Jesse will kill Walt. And that would also be a very interesting sort of turn to the story, but —

Simmons: I think you can have both. I think whatever you just described is going to happen probably in some form but he’ll ultimately come back because he’ll have some sort of unfinished business, which brings us back to your point …

The End of the End

Tony Soprano and Walter White stand by a Sabrett hot dog cart. Tony’s dog is loaded with chopped onions and sauerkraut; Walt’s has one precisely drawn line of ketchup running its length.

“It’s nice to get into the city once in a while. These are good, right?”

“Thanks for coming over. I had to meet you.”

“You’re the motherfucker who knocks! Is that how it goes?”

“I wish I’d thought of that. That’s really good.”

“Thank you, I appreciate that. I feel like I don’t always get credit. It’s nice.”

“The black hat, the Heisenberg, it’s all good stuff. The brandin’, so important these days.”

“And all that Scarface shit, you really weren’t fucking around. The gun in the trunk?” He holds out his hot dog like it’s a machine gun. “Powpowpowpowpow. Marone!”

“You know how it goes, no half-measures.”

“That’s another good one! You’re full of them.”

“Five seasons, you know, some of them are just going to catch on.”

“How many cops you get?”

Tony shoves him out of the way. A man in a black suit crashes to the pavement in between them. He rises and dusts himself off.

He nods to the pair and walks off in a hurry.

“Draper. Attention whore, this fucking guy. Every hour on the hour.”

“I have to be honest, that’s a little unnerving.”

“We all have our problems, I suppose.”

“It’s good you can keep perspective like that. I used to talk to a perspective person. She was nice.”

“You know what? Because I like you and you get it, you been there, I’m gonna tell you.”

“Wow. That would be an honor.”

“Hold on a second, lemme get another dog. One more, load it up.”

The vendor slathers a hot dog in kraut and relish.

The vendor’s hand disappears back into the cart.

Tony takes a giant bite of his hot dog.

Songs of the Week: The Wonder Years, Crash of Rhinos, and the Civil Wars Work Out Their Emotions