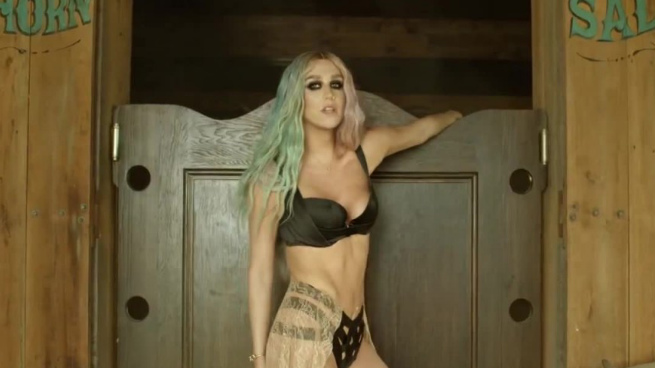 Why can’t Ke$ha catch a break on her own? Following the commercial underperformance of her 2012 album Warrior and the singles it spawned, America’s favorite Trash Queen was floundering around on reality TV and drinking her own urine while her fans mounted their case against Dr. Luke and her eight-album contract with him as having sabotaged her career. Then came her rehab stint for an eating disorder — also thought to be traceable to Mr. Gottwald — and, just when it seemed like things couldn’t get worse: Timber!

Earlier this week, Sean Fennessey held up “Timber” as an example of how meaningless the “rap” label is in mainstream music these days, but I barely think of Pitbull or the similarly reviled Flo Rida as rappers. They’re MCs in the most literal sense — masters of ceremonies, weightless anchors, party hosts. (Come to think of it, that’s probably how they make a considerable amount of their money.) In “Timber,” Pitbull is just saying words about partying, name-dropping a controversial starlet here, a newfangled vodka there, and then literally calling out dance moves, as if anticipating how many wedding receptions this song will be played at. He declares himself “slicker than an oil spill” which is both boldly topical in this Southern-fried context and remarkably self-aware. “Timber” is more country-dance than country-rap, which places it closer in spirit to Rednex’s meth-sick “Cotton Eye Joe” than the “Cruise” remix. Perhaps I appreciate the ballsiness of making a swing at hillbilly rave music in 2014 — the Frontierland harmonica over the opening chords is just deranged and silly enough to convey how few fucks this song gives about the sanctity of any genre.

As for Ke$ha’s part in all this, what can I say? She’s delightful with the four lines she’s given, turning “day-unce” into two syllables, and inspiring nostalgia for the early days of Gaga. Ke$ha’s Wikipedia page contains, as of this writing, five uses of the word “yodel” — a track like this seemed practically predestined. In a pop marketplace full of “ooh-ooh” refrains, hers is extremely competitive. Also, it’s just funny to think about her actually yelling “Timber!” on a dance floor as she prepares to chop that ass down.

There is something bittersweet about Ke$ha having her first global-smash hit during what by all reports seems to be a very difficult time in her life, something slightly demeaning about having to ride to the top on the back of a Pitbull track. “Timber” uses Ke$ha more as an instrument than a collaborating artist, and sadly (for those of us who always find ourselves rooting for her), maybe that’s the only way mainstream pop finds her palatable. You can’t drink that questionable dollar shot of well whiskey straight; you’ve got to mix it with the utilitarian sugar high of Red Bull or Rockstar, then plug your nose, swallow, and let its effects take hold.

Filed Under: Music, Pitbull, Ke$Ha, Overplayed Song of the Week

“Make no mistake, Magic Johnson. I will [EXPLETIVE] end you.” —Young Larry Bird, after the 2-point shooting contest