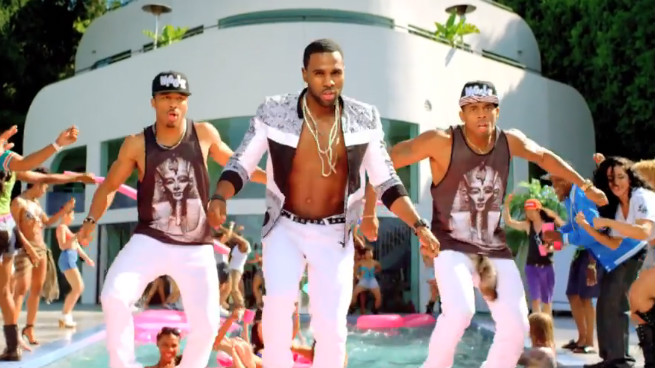 It’s been about 16 months since Billboard started adding streaming data into the Hot 100 algorithm, and boy, oh boy, have artists, songwriters, and labels been running with the wonderland of possibilities that opened up. In the spring, reigning chart queen Iggy Azalea took advantage of Tumblr’s insatiable appetite for ’90s nostalgia and got a big viral boost off video views for “Fancy”; now, Jason Derulo is cashing in on our nation’s proudest new tradition: the butt Vine.

(By the way, I like that five years ago, the words “butt Vine” would have probably caused no small amount of confusion and terror.)

This week Taylor Swift threw some subtle shade at the idea of a novelty song, which of course, I have to take issue with. Novelty songs are the music equivalent of a summer blockbuster: It’s OK to hate them artistically, but you can’t discount what their popularity says about our priorities as a society. Whether you love or hate a song, there’s a certain peak of saturation it can attain (or, if you will, “overplayed-ness”), after which you will always look back on it with a degree of affection, simply for having been a signifier of a certain time or place. But now that there is a way to essentially game the system, in the same way Internet content farms formulate headlines for clickability, the waters have been muddied even more than they already were through standard airplay payola rigmarole. “Wiggle” directly addresses its intentions: “If I take pictures while you do your dance, I can make you famous on Instagram,” sings Derulo. If you listen closely in those five seconds, you can hear one million teenagers grabbing their phones and queuing up the song on their laptops.

This is potent stuff, and I can’t find it in myself to truly hate on that level of pop ingenuity. At the same time, it makes me long for equally-dumb-but-semi-organic novelty songs like Eiffel 65’s “Blue,” or even “Gangnam Style.” Maybe I’m being naive, but I never got the feeling there were focus groups behind those tracks, while I’d be willing to bet Derulo had a whole team behind his latest half-album Talk Dirty, which includes the equally meme-y single of the same name. Even the nature of that album’s release suggests strategic overthought, or at least a called audible — seven of its 11 tracks are just off his 2013 album, Tattoos, which was released as a five-song EP here and a full-length everywhere else last fall, then rebranded off the heat of “Talk Dirty”s huge success a mere six months later. Honestly, who in the U.S. was seriously checking for Derulo until that Balkan Beat Box sample or that goofy slide whistle? These are good sonic tricks and jokes, but now they’re being executed with a specific goal of virality in mind — with the end goal being the (usually) package deal of chart action and airplay. (“Wiggle” is still down at no. 22 on the Radio Songs chart — streaming and downloads probably account for the majority of its Hot 100 placement. I would love an explanation of why mainstream radio is usually so laggy on the pickup of new songs, but I’m sure it would depress me.)

The song itself is cannily aimed at naughty 10-year-olds — dirty enough to feel subversive to sing along to, but built on a playground nursery phrasing and rhyme pattern that feel instantly accessible and familiar. On top of the earwormy whistle (which producer Ricky Reed purchased during a coffee run at a Party City next door to Starbucks) there are the words “big fat butt,” followed by silence — a no-brainer to choreograph around for your #ButtVine. The presence of Snoop and the minimal, bass-driven verses all seem like direct callbacks to “Drop It Like It’s Hot,” another quick way to our pop hearts. It’s self-aware but doesn’t announce it too loudly; Derulo dramatically wailing “How’d you get that in them jeeeeeeans?” during the bridge is borderline Lonely Island material.

Still, I can’t quite find it in myself to call “Wiggle” fun. It’s smart in the right ways, and stupid in the right ways, but by the end the strings are just visible enough to be a bit of a bummer. I should probably check out the other tracks on Talk Dirty just to brace myself for whatever world-dominating plot Derulo and his team have up their sleeves next. Do they offer their services as branding consultants? I know a guy who could use some help.

Final verdict: A vine literally growing out of a butt.

The 2014 Emmy Nominee Reaction Awards: And the Best Quote From a Sleep-Deprived Nominee Goes To …