Overplayed Song of the Week: Idina Menzel, ‘Let It Go’ 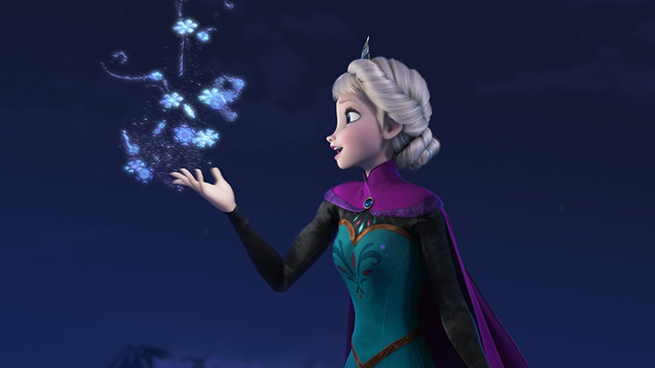 The world cannot let “Let It Go” go! The self-actualization ballad of the winter/spring movie season has been steadily climbing the Hot 100 for the past couple of months, and I wouldn’t be surprised if it reaches no. 1 by the end of April, despite nearly nonexistent radio play and having its origins in a film that was released almost half a year ago. Not just any film, though — Frozen now holds the record for highest-grossing animated film of all time. The film’s overwhelming popularity has bolstered the entirely digital sale– and YouTube-fueled momentum of its breakout ballad — the Frozen soundtrack has been at no. 1 on the Billboard 200 for the past eight weeks, and the proliferation of covers and viral interpretations are old news now in Internet time. Menzel’s performance at the Oscars should have marked the peak of our “Let It Go” obsession, but the added bump of John Travolta–aided name-bungling virality gave it even more shelf life in the popular conversation. Then Menzel did a twee toy instrument version of it with the Roots. Then a dude who better be peeling potential sexual partners off of him at this point if there is any justice in the world sang it in a bunch of Disney character voices. We take it for granted now that on most days, at some point, someone’s going to link us to a new cover of “Let It Go” that will BLOW. OUR. MINDS. “Let It Go” is just a part of the fabric of our Internet lives now, like email or MapQuest.

Songwriters Kristen Anderson-Lopez and Robert Lopez won that Oscar, by the way, and if “Let it Go” goes to no. 1 it will join an increasingly rare subset of Oscar-winning songs that also topped the Hot 100 — the last song to do so was Eminem’s “Lose Yourself,” and before that, Celine Dion’s “My Heart Will Go On.” However you felt or feel about those songs, they were massive, culture-gobbling hits that will be remembered not only by fans of their respective artists or films, but by anyone living and breathing at the time in a society with a modicum of Western influence. So that’s the level of cultural significance we could be talking about here.

Like I said, this is not a radio or club play hit (don’t want to speak too soon, though; still got my fingers crossed for a DJ Snake remix); even our friend Demi Lovato’s popified take can’t seem to get much traction on non-Disney radio. Adding guitars and drums does little to mask the song’s classic Broadway soliloquy structure. And that’s fine — I’d argue that its use of traditional forms in the telling of a frequently nontraditional fairy tale is one of the things that has given Frozen its broad appeal. The Lopezes have said they were influenced by Lady Gaga and Adele, which you can definitely hear; “Let It Go” sounds like “The Edge of Glory” and “Someone Like You” had a saucer-eyed CGI baby. That probably says more about the theatricality of those songs than it does about the poppiness of “Let It Go.”

And yet, despite all the life that has sprung up around it, “Let It Go” rarely sounds that great outside of the context of the film. All those separate parts, major-minor shifts, and a slow, lower-register intro make it hard to really gain steam until the second verse. It all works fine in the film, because it’s a part of the story, but there’s a reason the producers of the Lovato version chose not to lead off that way. Even Menzel’s Oscar performance faltered and seemed rushed live. It’s a tough song to nail, not that I would know from personal experience or anything. In fact, I’m not really interested in hearing anyone over the age of 8 who’s not a drag queen try to pull off its degree of difficulty, no matter how many Tonys they have.