Nicole Scherzinger Attempts to Resuscitate Her X Factor Dreams in the U.K. 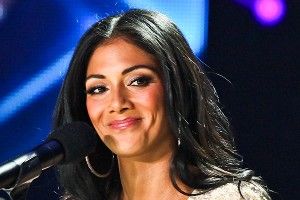 The ongoing game of hot potato that the U.S. and U.K. have been playing with ex-Pussycat Doll/ex-X Factor judge Nicole Scherzinger has reached a shocking conclusion (for now). The Daily Mail reports that the sinewy chanteuse behind such memorable hits as “Baby Love” and “Wet” has been tapped to replace former Destiny’s Child member Kelly Rowland after the well-liked judge departed the show after only one season (something about “scheduling conflicts”). This of course comes after Scherzinger was unceremoniously dumped from the stateside version of the overblown singing competition after only one season (something about “you can’t do your job, everybody hates you, and you made a 13-year-old girl cry.”)

The U.K. has been good-naturedly handling the unenviable task of making Scherzinger a star for years now, (graciously letting her release her sophomore solo album Killer Love on their shores after a U.S. release was canceled — I’m sensing a theme here), but this X Factor development is some straight-up martyrdom. Seriously — pull yourself together, Britain! You made Sherlock and Downton Abbey — you don’t need to continue this self-harm! But in the meantime, what else are we done with that we can foist off on our friends across the pond? Silly Bandz? Froyo? Teen Mom? (Actually, wait. I would totally watch British Teen Mom.)

Meanwhile, it’s been a busy week for Miss Scherzinger — who just nabbed a Teen Choice Award nomination (Choice Movie Scene Stealer: Female) for her work in Men in Black III, and who is now undoubtedly in some heated contract negotiations with Broadway Nails, who will have to find a way for her to continue to be an imPRESS spokeswoman while simultaneously making a whole new batch of would-be Jedwards cry. Yup, have fun with this one, Britain. Godspeed.

Trailers of the Week: Django Again, Savages, 360, and More