Let’s Help Replace the Victims of The X Factor Bloodbath 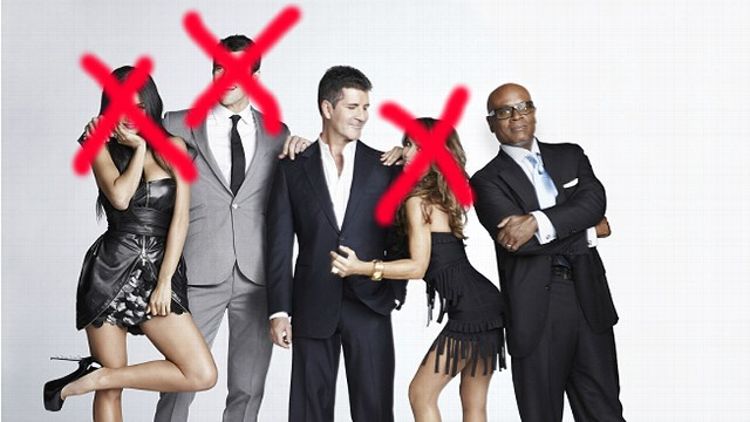 The news of last night’s The X Factor massacre arrived first as a crimson trickle from a shaving cut, but finished in a blood gusher of horror that would make the Overlook Hotel’s elevator blush from inadequacy. First, host Steve Jones, upon closing his medicine cabinet after retrieving a tube of Crest Ultra Brite, met the stoic reflection of Factor impresario/assassin Simon Cowell, who dispassionately drew a straight razor across the Welsh mannequin’s throat. “You’ll never be Seacrest, I know that now,” he whispered in Jones’ ear as the erstwhile emcee burbled his last, futile apology.

Next, overmatched, weak-link judge Nicole Scherzinger went face down in a $19 beet-and-goat-cheese salad on the Chateau Marmont patio mere moments after receiving a cryptic “Hee-ho, cheerio” BBM from “Scowell.” And, finally, there was Paula Abdul, dear Paula, discovered propped up in her bed, smile frozen on her face, mascara streaking down her cheeks — tears of joy? Of sweet release? — clutching a Drakkar Noir-perfumed note reading, “I loved you the most.” Only later would we learn Abdul’s heart had been removed with surgical precision, flash-bronzed and placed atop the mantel at Cowell’s Bel Air compound, next to a vase fashioned from Brian Dunkleman’s skull. Indeed, it was a dark day at the Factor, sparing only music mogul L.A. Reid, with whom Simon shares an electric, aggrosexual chemistry that as often as not resulted in the two judges trying to bludgeon each other to death with their rage-engorged meat-gavels.

Of course, a mere postmortem does nothing to solve the problem at hand: Who’s going to replace Steve, Nicole, and Paula and fill the gaping holes unexpectedly blown in the X Factor roster? We’ve decided to lend a hand by humbly suggesting a replacement for each.

Unless you’re Ryan Seacrest, and the universe has but one of these golden creatures, competition show hosting is an utterly thankless job. Seacrest alone has elevated the afterthought gig to an art form, becoming the hobbled American Idol‘s main attraction, its onstage master of ceremonies and gentle backstage confidant to the spurned and misguided. As much as Cowell must have resented Seacrest’s ability to lure the spotlight from its usual focus on the plunging V of his sweater neckline, he obviously realizes he needs another charismatic star to own the stage, and Jones (panicked catchphrase: “We need to move on! We need to move on! Dear God, they’re telling me WE NEED TO MOVE ON!!!”) wasn’t it. So why not aim high and court The Coop? It’s not like Cooper hasn’t already debased himself with, say, a daytime show about the contents of his refrigerator. He’d probably jump at the chance to extend his personal brand into prime time. And think of all the wonderful, uncomfortable giggling every time Simon insults his manhood! He’ll take the job for scale.

The final nail in Scherzinger’s velvet-lined coffin was her total inability to choose between first-season junior darling Crow and less-beloved-but-more-viable-star Marcus Canty, with her abdication of her voting responsibility resulting in the moppet’s immediate tie-breaking ouster by audience decree. Of course, Scherzinger was completely useless as anything but nurturing eye candy before that crisis point, but her total mental breakdown in the tear-drenched aftermath of Crow’s dismissal was the last straw. Images of Scherzinger tearing at her corset, plucking out her press-ons and trying to eat her entire weave as she self-immolated atop the judges’ table will haunt us forever. We hand over her slot to Crow only in the name of poetic justice.

Abdul’s chief failure during X Factor‘s inaugural season was — and as incredible as it sounds, it’s the truth — being too normal. The Paula who’d offer gibberish tableside soliloquies touched off by a whispered Cowell trigger word and would nod off in the middle of satellite junket interviews had been replaced by a pretty nice lady who was just not as much fun to watch. Tough break for getting herself together, we know, but that’s why it’s called show batshitness and not show niceness. The only possible choice to fill the straightjacket-sized void on the judging panel is Lange, whose star-remaking turn on American Horror Story was perfect preparation for a crazied-up X Factor. Not only wouldn’t she blink if Simon decided to show up in a full-body latex suit, she’d grab the fireplace poker out of his hand and finish off one of L.A. Reid’s darlings herself. After a season on AHS, she’s seen some things, and she’s ready to do whatever it takes.