Judging The X Factor: The Semi-Star-Studded Finale Spectacular We’ve All Been Waiting For! 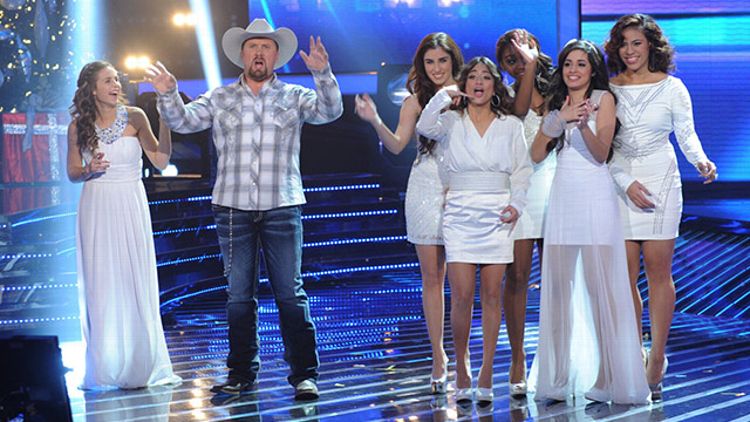 For reasons still not entirely clear to them, Grantland editors Jay Caspian Kang, Mark Lisanti, and Emily Yoshida have decided to track the second season of The X Factor. The big purple spaceship finally crashed across the finish line last night. Here’s the report from the wreckage.

Kang: I would like a purse made out of LeAnn Rimes’s face. Her cheeks and forehead already have the whole leathery patina thing going, and someone did something really weird to her hair because it looks like it’s been stolen straight out of the glitter-yarn section at Michaels. Isn’t LeAnn Rimes still only 19 years old?

This is where Lisanti expects me to rant about another desecration of “Hallelujah,” and how weird it is that a Leonard Cohen song has become a singing competition standard, but I’m not going to take the bait. Shrek and Rufus Wainwright hammered the last nail in a coffin built by Jeff Buckley. The song is so far removed from its origins now that the poop no longer splatters on Leonard Cohen’s lawn. So when Carly Rose goes Celine on “Hallelujah” all the way down to the wind tunnel and weird “I AM THE GODDESS OF LINENS ’N THINGS! WATCH ME SHOP FOR BARGAINS!” staging, she’s raping Shrek, not Leonard Cohen.

Lisanti: I guess Kang got all of the “Hallelujah” rage out of his system during Idol season, because six months ago he would have flown to “Westchester”* and burned the entire place down, just to prevent the possibility of copycat songs. This, more than anything, is proof of how this show eventually hollows out even the most obsessive of TV-karaoke junkies; if Jay Kang (who, up until about 48 hours ago, was still asking “Should we have covered The Voice?) can’t be bothered to fill up his gas can and torch a “Hallelujah” cover, well, at least our misery ends tonight.

There’s probably a 50 percent chance that Carly wins the whole thing. On pure talent, there’s no contest, but we’ve seen Tate cruise along on the “I will consume any country-music-related product put in front of me” passion of a maniacally dedicated voting base, so he can’t be counted out. And, as I think we’ve all expressed in one way or another over the past 438 weeks of the contest, a Carly win will be EXCEEDINGLY BORING. She’s the best — we all recognize that, but this is Melanie Amaro all over again, except 13 years old, so somehow even less relevant to any part of the world that isn’t broadcast on The Disney Channel or Nickelodeon. Maybe we’ll see her again in four years, when she becomes the teenage Celine Dion, but until then, she essentially disappears after the balloons drop tonight. Wow, that’s kind of depressing. Maybe someone can write her a song about how sad that is.

[*This “town of Westchester” thing has reached absurd levels. Westchester is a county that contains many towns, villages, small cities, nooks, crannies, malls, elf-huts, upscale Irish bars, shopping malls, Denzels, DMXes, and Martha Stewarts. It is a very large place, stretching from the north end of the Bronx and up into farmland. Carly Rose Sonenclar is from Mamaroneck, a (wealthy) TOWN in the COUNTY of Westchester. Last night they threw to a satellite feed from her viewing party and talked to a man they identified as the “mayor of Westchester.” But there is no mayor of Westchester. So either (1) the town of Mamaroneck reached some kind of agreement with the show to never devalue their brand by mentioning it on air, or (2) this “mayor of Westchester” is an insane militia general looking to unify the entirety of the county as a single super-town, and he’s going to co-opt Carly as the symbol of his beautiful revolution. (BTW, White Plains would immediately crush such an uprising. Though Yonkers might secede and incorporate as the North Bronx.) Anyway: STOP THE MADNESS. Just say “Mamaroneck” tonight, motherfuckers. SAY IT!]

Yoshida: Two times Mario Lopez told Carly Rae that her “two best friends” had something to say to her from The Town of Westchester. Two times Carly Rae’s face went blank with lack of recognition. Compare that with Allie from Fifth Harmony, who nearly had a seizure when some guys in San Antonio held up some sort of significant pizza for the camera. I guess touring with Les Mis means not a lot of time to hang out at home and develop real relationships with people and go through the kind of emotional development that enables you to convincingly sing “Hallelujah.”

Bum deal about Carly Rose Sonenclar Day, too, which is probably too close to Christmas to result in a school holiday, probably the only way all her “friends” in “Westchester” would’ve actually cared.

Yoshida: I wasn’t watching this live, so I can only assume that the five people who were on Twitter at the time got a lot of mileage out of the image of blitzed-looking married dad Tate Stevens singing about putting his “hand” in Little Big Town’s “cooler.” Here are some more lyrics to “Pontoon,” just so we’re on the same page:

On the pontoon
Makin’ waves and catchin’ rays up on the roof
Jumpin’ out the back, don’t act like you don’t want to
Party in slow motion
Out here in the open
Mmmmmmm … motorboatin’

Kang: Who knew there was a country ABBA? Little Big Town, you guys are all right!

Kang: They did the same song they did last week, and I still don’t know who sings the original or what it sounds like when it’s not arranged to a bunch of confetti and giant bows and candy canes and the LED image of a hornless pegasus flying across the sky. But, you know, they do that one song well, even though watching the five of them kinda dance around in tube dresses looks all weird and pixelated and awkward. You remember in Street Fighter II when you’re in Chun Li’s board and there are all those Chinese people in the background kinda wriggling about? That’s how Fifth Harmony dance.

I did like their duet with Demi because “Give Your Heart a Break” is one catchy-ass song, and there’s nothing like watching a 19-year-old go out and give a washed-up performance worthy of 2012 Smokey Robinson. How has Demi already lost her voice? Why does she look like she’s 40 already? I demand answers.

Yoshida: My guess is 10 seconds before walking on stage, Demi remembered that this was no ordinary performance, and that a bunch of assholes with laptops were going to be making jokes about her on Gchat and looking for any opportunity to call her a hypocrite for any criticism she might have given the contestants this season. She’s the only one on the panel this season who’s vulnerable to the same sort of criticism as those she judges (Britney is immortal, no matter how bad her wigs or will.i.am collabs get, and L.A. and Simon are still trying to find a venue outside the basement of the L.A. Reid compound for their a cappella ensemble passion project (Champs Sports Pub in Burbank is the most likely prospect) but the owner wants to charge a two-drink minimum, seems excessive, so they’re immune, as well.) I imagine she choked. They should just let people lip-synch on The X Factor like they do in the UK, but we still have all sorts of precious ideas about “authenticity” and “reality” and “actual talent” in the States that we haven’t gotten over yet. (Remember this?)

Biggest complaint between the two performances: Once again, in a live performance of “Give Your Heart a Break” (which is such a good song, you guys) nobody bothered to sing THE BEST PART, which is the whoa-oa-oa-oa right before the last chorus. It’s the same melody as the opening to Justin Bieber’s “Baby,” but Demi sounds better singing it. I can’t believe there were six singers on that stage and nobody sang the Whoa-oa-oa. I want my two hours/three months/life back.

Lisanti: I have no idea how this happened, but I think Fifth Harmony were responsible for my two favorite performances of the season. If someone can whip up their own “Anything Can Happen” and “Give Your Heart a Break,” they might have something there. (Demi looked like she knew she was outclassed, and just wanted to out-sing three of them.) Maybe they win? Can they win? Simon wants them to win; Carly’s half a decade from the big leagues and Tate is half a decade from a thriving steamroller rental business. Remember Emblem3? I wonder what happened to those guys. I hope they’re OK, wherever they are.

Yoshida: Tate will win the popular vote, but Fifth Harmony will with the producer’s backroom vote.

Lisanti: My brain says Carly, but my heart says Fifth Harmony. Anything can happen. Mamaroneck.

Jay Caspian Kang would like to apologize to LeAnn Rimes.
Emily Yoshida cried about Demi Lovato last night, but she won’t talk about it.
Mark Lisanti is the mayor of Westchester.