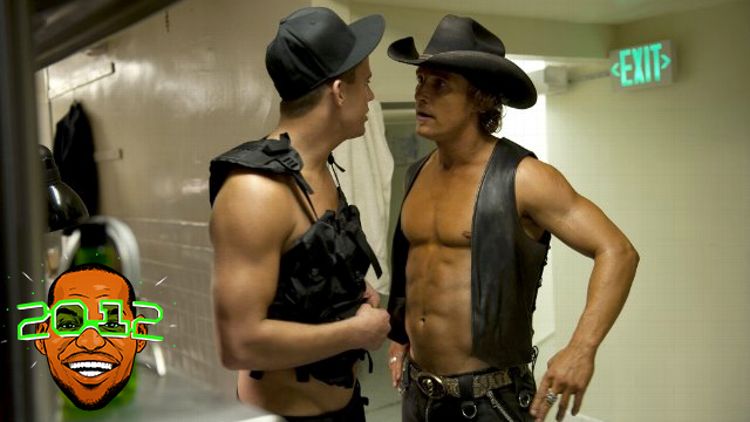 2012 was a good year for all kinds of people (e.g., Jeremy Lin, Christian Marclay, Lena Dunham, R.A. Dickey, Barack Obama, Trinidad James …). But in the realm of White Male Actors (Who Wore a Thong In At Least One Movie Scene), two reigned supreme. Their names are Matthew McConaughey and Channing Tatum, and this summer, in Magic Mike, they gave us the most unexpectedly cohesive all-purpose treat of the year.

Magic was just the centerpiece of Matt’s and Chan’s 2012s, though: Over the last 12 months, both men shed skin and evolved — one into the true-blue leading man we thought he might be; the other into the fine, odd actor we’d long stopped hoping he’d become. So yeah blah blah blah, congratulations. Now on to the important stuff: Which of them had the better 2012? To the head-to-head, chaps-to-breakaway-sweatpants faceoff!

Simply: There would be no Magic Mike without Tatum. He not only birthed the concept, produced the movie, and played the lead character — he also lived that life. In a real “don’t step on the mosquito” situation, if the-then Chan Crawford hadn’t spent a good chunk of his 1999 popping his top at Tampa’s elite nude-dude revue Male Encounter, the field of Hollywood man-stripper movies would have been set back decades. And let’s not forget that Channing was the only guy in the movie who could actually dance. Watch it again, forcing yourself to focus on Tito, Tarzan, and Big Dick Richie during the group sequences, and you’ll see a tumbling pile of gawky limbs. But why pay attention to anything other than the human moving as if touched by the souls of ’51 Fred Astaire, ’82 Michael Jackson, and ’93 Wacky D themselves?

Here’s the thing, though — in 25 years, when Magic Mike gets its special anniversary laser-into-your-optic-nerve re-release, it won’t be Tatum that the floating-orbs-of-knowledge-that-have-replaced-movie-critics will be raving about. It’ll be the singular, sneaky, snaky — practically drippingly greasy — performance of Mr. Matthew McConaughey. As Grantland’s once and future RazzieWatcher Dan Kois writes for Slate, lamenting McConaughey’s tragically overlooked Oscar campaign: “Dallas, the strip-club owner gone to seed … is the iconic Matthew McConaughey role. It features all that we’ve ever loved about McConaughey — his goofiness, his nonchalance, his sexy strut, his absurd self-regard — in the maximum concentration allowed by law. Magic Mike is … so dense in McConaughey-per-second that the human eye must retrain itself to take in such grandeur.”

By the way, while McConaughey’s Best Supporting Oscar chances do look slim, there’s this: “Ladies of Tampa” — the song he co-wrote, and then so ably crooned to all those fine, sexy, sophisticated ladies of Tampa — is eligible for Best Song. If there’s some small justice in the world …

Quietly but persistently, McConaughey spent 2012 undoing a decade’s worth of rom-com soul-crushing by tackling tough, small roles. Summing up his slate of batshit crazy indies, the New York Times wrote, “In Bernie, Mr. McConaughey burnished his character-actor credentials as a larger-than-life small-town prosecutor … [He] also proved his ability quietly to anchor a modest, old-fashioned movie, as a fugitive who befriends two Mississippi boys in Mud … In Killer Joe, he has the title role of a sociopathic, Stetson-wearing cop and part-time hit man with a baroquely sadistic streak and a dead-eye stare behind his aviator shades. In Lee Daniels’s sweaty Southern Gothic melodrama The Paperboy, the talk of the Cannes Film Festival in May, he goes even further against the grain, playing a closeted gay reporter with a taste for rough sex and a raging death wish.” It was an invigorating turn of events, all the more so for how unlikely it was. After all this time, McConaughey just up and decides he wants to use his powers for good and not evil?

Meanwhile, Channing Tatum was busy becoming a movie star. Magic Mike, its backstory, and its press tour, made for a very nice showcase for Tatum’s “Aw shucks but you still wanna have sex with me?” charm. But it was by helming two polarized projects that Tatum proved his mettle. On the one hand we have The Vow, a Nicholas Sparks–type head-trauma weeper starring Chan as a hipster who believes in Thom Yorke’s tingling fingers with an amnesiac wife he’ll never stop loving. On the other we have 21 Jump Street, a broad R-comedy in which Tatum and Jonah Hill shout and punch and sweat and fling themselves into and onto everything for a laugh. Somehow, both slayed. (Was the sight of Tatum, high as balls on Holy Fucking Shit, leaping with glee through a gong not one of the greatest scenes of 2012?)

As nifty a trick as McConaughey pulled this year, I’d argue Tatum’s was tougher. Ultimately, downgrading — even artsy downgrading — is always easier than upgrading. Going the film festival fare route was a bold move, but it’s not like McConaughey had to look hard to find indie directors salivating to have his star wattage on board. Tatum had to land just that exact right balance of wide-appeal breakthrough roles. It’s a challenge that has felled many bright-eyed stars before Tatum, and will fell many to come. But Channing triumphed.

Who booked what in 2012? Tatum’s talked up a Magic Mike musical, and says a sequel — possibly directed by Magic Mike himself — is definitely on its way. He’s also slated to produce and star in an Evel Knievel flick, and has a supporting role in Steven Soderbergh’s prescription-pill thriller Side Effects. Then there’s Bennett Miller’s Foxcatcher, the long-gestating true story of John du Pont (being played by Steve Carell), the heir to the du Pont fortune who, in 1996, killed his friend, the Olympic Gold medalist wrestler Dave Schultz (being played by Mark Ruffalo). That’s certainly a project of a higher pedigree, but Tatum, who’s playing Schultz’s younger brother, won’t be front and center. Which leaves us, as lead roles, with two items: G.I. Joe: Retaliation and Roland Emmerich’s “Die Hard at 1600 Penn” flick White House Down. Both sound like serviceable action flicks without exactly making you plotz for The Reign of Tatum.

Meanwhile, McConaughey keeps on stockpiling quirky little roles. There’s The Dallas Buyer’s Club, a facts-based drama starring Matthew as an HIV-positive man who starts a non-FDA-approved-meds smuggling ring (also featuring: Jared Leto, as a transexual woman). There’s Thunder Run, a 3-D, all-computer-generated Iraq war movie. There’s Scorsese’s Wolf of Wall Street, in which McConaughey might once again steal scenes as Leonardo DiCaprio’s boss. And, best of all, there’s True Detectives, “an elevated serial narrative with multiple perspectives and time frames … center[ing] on two detectives, Rust Cohle (McConaughey) and Martin Hart ([Woody] Harrelson), whose lives collide and entwine during a 17-year hunt for a serial killer in Louisiana.” Dude’s doing a TV show — not because he can’t get movies anymore, but because he wants to. Madman!

As hard as it is to make the leap to the A-list, it’s even harder to sustain quality while you’re up there. So now, after solidifying his romance and comedy bona fides, Tatum seems to be looking to shore up his action star cred, and playing it safe with White House Down. (You have to assume Tatum won’t dip back into the Magic Mike well until his shine recedes and he actually has to). Meanwhile, McConaughey has unshackled himself from all restrictions. That means money’s on The Bongo Kid to churn out more goods.

In other words: Who does your mom like better? McConaughey’s had this kind of thing in a stranglehold for eons, but getting dirty in the dark underbelly of American cinema means your mother might have checked out on him a bit. Meanwhile, Tatum waltzed in and nabbed the highest honor in Your Mom Land: People‘s Sexiest Man of the Year. Then he followed that up by impregnating his wife for the first time.

McConaughey hung tough: He got married to his longtime girlfriend, with whom he also had his third child. I mean, you gotta appreciate the competitive spirit there! But “third kid” is just not as exciting as “first kid” for your mom, and also, if we’re really being honest here, your mom is confused as to why Mac hadn’t married his lady years ago. Not that it really matters: This category was in the bag as soon as that issue of People hit the newsstand.

OK, picture this. Both dudes walk into a random, anonymous bar in a random, anonymous American town after a long night of shooting in the year 2012. It’s been a productive shoot so far, plus it’s their first night off for a while, and so they’re looking to get into some good, clean fun: shoot some darts, flirt with some girls, basically give these yokels a story they’ll be retelling for the rest of their natural born lives. And so the question is: At the end of the outing — when Tatum’s down to his wifebeater and a strategically askew baseball cap, and the bartender, Big Jolene, is cackling underneath McConaughey’s cowboy hat — who’s won the night?

I’d argue Tatum comes on strong. He twirls and flexes and maybe even busts out a few pirouettes, and at first the whole bar’s hanging heavy with him on the dance floor and Instagramming the shit out of everything. But ultimately, McConaughey’s endless well of tall tales, bottomless reservoir of good cheer, and infinitely sly grin sways the crowd into a deep, nirvana-like contentment, and everyone ends up in the corner booth with a couple of whiskeys, hanging on his every word.

And so the winner of this theoretical night of merriment, and therefore the winner of The Great Battle of White Male Actors (Who Wore a Thong In At Least One Movie Scene) Of 2012 — ladies and gentleman, Mr. Matthew McConaughey! Grantland has reached out to alert Matthew of his honor. We will pass along his acceptance speech as soon as we have it. All right, all right, all right.

Judging The X Factor: The Semi-Star-Studded Finale Spectacular We've All Been Waiting For!

Anchorman 2 Asks: What Are You Doing Exactly a Year From Today?