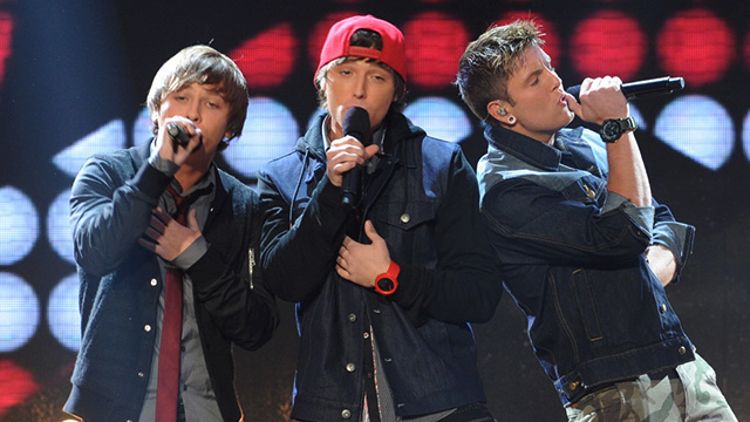 For reasons still not entirely clear to them, Grantland editors Jay Caspian Kang, Mark Lisanti, and Emily Yoshida have decided to track the second season of The X Factor. It’s their favorite singing competition show ever — don’t let the deadness in their eyes fool you.

Kang: I can’t really figure out a good anagram for her name. Every time I look at those letters, I just get COORS and RACECAR (a palindrome!). If she had another E in there somewhere, she actually could have CeCe Frey IN her name. Petition to make it Carles Rose Sonenclar?

Yoshida: I feel like Carly Rose is a really mean-spirited, dark-hearted human being. Not sure if this is based on anything in reality, or because I know she was a Young Cosette and I will forever resent anyone who got to be a Young Cosette. Proposal for new X Factor bylaw: If we can’t prohibit 13-year-olds from competing, can we at least prohibit 13-year-olds from singing Adele songs? All the Broadway Child emoting in the world can’t make me believe that you have any scars of anyone’s love — SORRY.

Lisanti:THAT BEING SAID, any discussion of this terrifyingly effective junior musical deathbot must recognize that she/it is, at minimum, about 4,000 times more talented than any other person in the competition. She is Shaq playing fullback in a Pee Wee football league. I don’t care that I just mixed sports, you see my point: She is charging ahead toward the end zone, murder in her eyes, dragging the seven helpless opponents who are trying to temporarily impede her inevitable progress to victory. I don’t care that Tate Stevens (who, by the way, will soon be rumored to be sleeping with the thinly veiled Tim Tebow stand-in from Nashville, rocking the ABC drama/Fox reality crossover slashfic world) has somehow taken to the gravel-spreaders message boards and rallied his base to dominate the voting. To quote L.A. Reid on Carly Rose’s unquestioned superiority last night: “Please don’t kill me with your beautiful voice-rays, Star Child, someone has to powder Vino Alan’s head.”

Lisanti: The first person who mentions the word “Rickrolled” is fired. (Except Kang, because he’s going to do it on purpose and I’m not letting him take the easy way out.)

Part of me sort of misses when Demi allowed the costume designers to outfit Paige as a different character from Ming the Merciless’s court every week, but there’s also something to be said for simplicity. This way works, too, and we’re able to focus more on the performance than on a headdress made of 800 golden deconstructed moose antlers and a cape with a crystal-encrusted P on it. I like it, I like it.

(Still on Team Paige, btw. Isn’t it amazing how I’m proven right about virtually everything, week after week?)

Kang Paige Thomas can’t sing. This wouldn’t be a problem if she could dance or kept putting out songs with insane beats or if she had the charisma of a Missy Elliot, but Paige never gets much past the Frankenstein pop star. Yes, she is hot and can technically sing pretty well and she pastes crazy shit onto her face and she “can move,” but she does all those things through a real filter of self-consciousness, like, “Hey, I’m a pop star, OK?” She should really take a lesson from Emblem3, who smell like ball sweat, moldy wet suits, and determination, because that’s who they really are. Paige, on the other hand, is the approximation of a pop star.

Yoshida: Who would have predicted that Paige Thomas would be Demi’s last act standing? Not only would I have not predicted it, until recently I would have actively rooted against it, but last night’s performance, combined with the fact that she hasn’t whined about her daughter in a while, makes me feel like Paige really deserves that spot. This mid-tempo, yet still danceable, arrangement of “Never Gonna Give You Up” was very “Diamonds”-esque, but more fun and loose and cheerful. I dug it. It feels nice to be back in Paige’s corner, and I know she’s been working hard to get me (yes, me personally — hi, Paige) back on her side. Simon’s right: just put Paige in ripped jeans and leather jackets every week. It makes her contrast nicely with the more aggressive try-hards on this show. Speaking of …

Kang:Sometimes I wish my television remote came equipped with a button that, if pushed, would eject a bean bag from somewhere in my apartment. This bean bag would have some homing device that would guide the bag directly into my nuts at like 90 miles per hour. The reason why this button would be nice is because it would provide me with an emergency diversion for horrifically awkward Intervention moments and whenever CeCe Frey efforts her way through “Lady Marmalade.”

Yoshida: I liked the ironic CeCe stan in the audience who called her “relevant.” I bet he felt really bad when she chastised him and the rest of America for putting her in the bottom. X Factor has clearly had its fun with CeCe and is ready to put her out of her misery; there’s no other reason they would air an entire package about what a bad attitude she has and how she yells at her wholesome Midwestern parents when she doesn’t win the TV singing contest. (Ditto for the Vino sabotage this week, though the goal there was probably just to mix up the results for the sake of suspense.) But you could practically see the wheels in L.A.’s head turning when he said he “actually enjoyed that circus,” as if he was wondering in real time if there was a way to flip the script here, render Vote for the Worst obsolete, and make CeCe the first post-ironic X Factor winner.

Lisanti: We’re going on what, five weeks, since she’s sung a note in tune? I’m not sure where we currently sit on the CeCe Frey Identity Continuum, but it’s somewhere in the noncommittal middle between the Full Cheetah Girl of the early season and the Celine’s Basement faux-diva of the past three or so utterly disastrous shows. If there’s one comforting aspect in the prolonged torture of her soon-to-be-mercifully-cut-short tenure as the judges’ most-abused plaything (picture that scene from the original Clash of the Titans in which the gods manipulate helpless figurines in their Olympic diorama, but with Demi and Simon just saying “fuck it” and putting some hungry ceramic lions in her dressing room), it’s that she’s gonna go down proudly rocking some glittery junk smeared across her face.

Kang: Last night on Twitter, I asked, “Who looks more like a drag queen: Britney or Will.I.Am? #xfactor” Then I hit refresh on my browser for like five minutes until I felt shame because apparently nobody else cares about these questions, which really makes me question whether “DIVAWATCH” can be adapted into a full-length Hollywood feature.

Yoshida: Adding “#xfactor” to any tweet is the most simultaneously cathartic and alienating thing you can do on the Internet in 2012. I have a very low threshold for anything involving Will.I.Am. BUT. I have a very high threshold for cynical, heartless, apocalyptic pop music. That said, this video made me depressed about the direction we’re headed in as a society, and for the first time in a while a pop song made me feel like I was living in the worst of all possible worlds.

Lisanti: This just proves my theory that Will.I.Am is a squirrel who accidentally stumbled upon a genie lamp while burying an acorn, then used his resulting wishes to become a human teenager with unlimited recording studio access, a mid-range Casio keyboard from Sam Goody, and the ability to ensorcell any musician with five seconds of unbroken, weird eye contact. To his credit, he’s accomplished some amazing things with those magic gifts. Like, he wrote three-quarters of a bad song and shot a music video with Britney Spears in under 45 minutes! Not too shabby. Remember, it’s not the size of the lamp, it’s how you rub it. (And yes, I did have a novelty bootleg Aladdin T-shirt in college that said that.)

Kang: As of yesterday morning, the boys of Emblem3 had exactly one dance move between them: the “smirk, look off to the side, and wave your hand in front of your face like you’re waving away a fart cloud” (a variation of the Dave Coulier “Cut.It.Out”). Last night they added the “rip your denim jacket off your body while the song is ending and then stomp on it.” That’s pretty much all they need, though, because the emotive range of their music runs from “PSYYYYYCHE” to “IT’S REALLY HOT IN HERE, HUH? MY JACKET IS CHAFING ME.”

Which is to say I very much liked what they did last night and I’m almost at the point where if they decided to cover Rancid’s “ … And Out Come the Wolves” I might wait two weeks before eating the cyanide pill because even though the resulting music would make me want to kill myself instantly, I might just stick around long enough to see if the blonde kid in Emblem3, the one who looks like Stoned Guile from Street Fighter, could actually do fractions.

Yoshida: On that first “I’m in love — ooooooh” I was like, “Hey, Emblem3 learned to harmonize! Perhaps we have not given them enough credit for their raw musical talent!” Then I realized that half of the vocals in this performance were being piped in and they probably turned Stoned Guile’s mic off altogether. Simon was super stoked about this one, probably because it’s the most like One Direction they’ve ever looked/sounded. I liked when their disenchanted ex-gf Demi was about to be all, “It’s not me, it’s you,” and they were like, “WAIT. BABE. We have guitars, though.”

Lisanti: It’s true: Tiny-Faced But Super-Muscular Zachery Ty Bryan threatened to unleash their musical instruments on us next week. They probably make the little brother with no name play bass, right? I could not be more excited to see how a couple of guitars impede their front-row high-fiving game. This is going to be epic. Give me the cyanide now, Kang, I can’t handle it. We are living in the best possible Emblem3-soundtracked world.