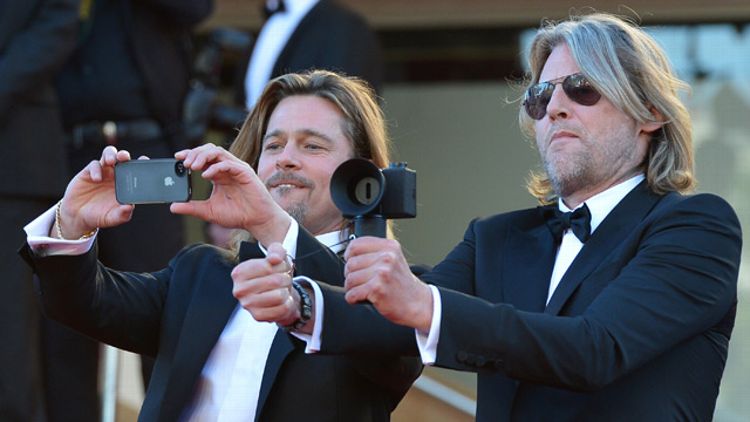 You can’t blame the marketing folks behind Killing Them Softly — the third movie from Australian writer/director Andrew Dominik, after Chopper and The Assassination of Jesse James by the Coward Robert Ford — for pushing it as something along the lines of “coolest man alive Brad Pitt straight-up assassinating some mf’ers.” Just know that if you go ahead and catch Killing this weekend, that’s not quite what you’re getting into. Adapted by Dominik from George V. Higgins’s 1974 novel Cogan’s Trade, the movie offers a lean and restrained (but still very murder-y!) low-stakes crime story — a couple of bumbling cons get hired for what seems like an easy score, a card-game robbery, and things get complicated — and presents it as a tale about “capitalism — about chasing a buck” in the depressed 2008 U.S. economy. Last week I sat down in a Waldorf-Astoria hotel room with Dominik (who looked particularly dapper in a bespoke suit, shoulder-length hair, and with an American Spirit in hand) to talk about Killing.

I know you shot in New Orleans, but that the book is set in Boston. Also in the movie someone mentions Somerville at some point, and I think Scoot McNairy’s kind of doing a Boston accent. So is it set anywhere in particular?
No, it’s not. It’s set in Anytown, USA. The original idea when I first read the book was just to make a straight crime drama, a Boston crime movie. But it seems like that genre belongs to other filmmakers, you know? And then I got the idea of basically making it like a political cartoon. And that meant that it had to become less subtle. The idea is that it’s any collapsed economy in America — not New York, not L.A. Somewhere in the middle, where everything’s fucked up. We shot in New Orleans because the other choice was Detroit, and Detroit would have been too cold. I personally like the look of it but if you’ve got actors in parked cars, in 25 below, you’re gonna be fucked. Their faces are gonna freeze.

Click here for all of our interviews with fascinating people from the worlds of sports and pop culture.
I really wanted the whole film to seem ordinary. These were just guys at work. In the movie you don’t see anyone’s personal space — it all takes place at work. And I wanted them not be wild and crazy guys but, like, fucking bureaucrats almost. One of the things I looked at for the movie is that Maysles brothers documentary Salesman. It’s about Bible salesmen in the Midwest, and no one’s buying Bibles, and it’s winter, and it’s so grim and desperate. I wanted to have that feeling where their lives are a fucking drag.

When you have Brad Pitt in your movie, are you thinking about how to use his off-screen movie-stardom to your effect on-screen?
I wanted to do it like typecasting. It’s cartoonish casting almost. You know, you got the fat guy, you got the skinny, goofy-looking dude, then you got the sweaty Australian guy, so you can really understand who’s who. You know what I mean? They look like The Three Stooges almost. And it’s the same casting with Jim and Ray [Liotta] and Brad, because it’s typecasting.

You have some really great, really long scenes of dialogue. How do you like to shoot those?
First of all, the scenes themselves were a lot longer than what you see in the picture — you end up condensing them a bit. But you can attack it all different ways. Sometimes you do complete run-throughs of scenes, sometimes you break scenes down into little bits. It just depends on what the actors like to do. It’s almost like jamming.

When Scoot McNairy and Ben Mendelsohn, the cons, are in the car on the way to pull off the heist, they’re having an extremely vulgar but also extremely funny conversation. On set, what was the mood? Like, were people laughing at bestiality jokes?
That was like the last night, the last scene we shot. Everybody had gotten used to hearing foul things by then. And by then everyone was just so fucking tired. It was probably only me and them that was paying attention to it.

James Gandolfini has a small but showy role, as a formerly great hit man now struggling with some demons. His hotel room meltdown is particularly mesmerizing. How’d you get that performance out of him?
Jim, I think of him as one of the great actors. He does very little, when you’re shooting, that’s not usable or believable. There’s not much that I did except encourage him. It’s not like he needs hand-holding. He’s looking for who the person is: He’s playing a heartbroken guy who’s real fucking confused about all the women in his life. That was the main thing: making all that stuff live in an emotional sense inside of him.

He gives himself a real hard time when he’s working. Sometimes it’s difficult to even get a word in because he’s beating himself up so bad. He’s a really nice guy, really, deeply sensitive guy, and I guess that’s why he’s so affecting. When [his character] Mickey’s talking about his wife or some girl he’s in love with, I feel like I can see his soul or something.

You know, um, actually I saw him two days ago and he told me that I told him one take he did was shit. I can’t believe that I actually did it, but maybe I did? I don’t know. It sounds like the sort of thing that I could do with an actor with real trust involved. But it’s not generally where you start. [Laughs.]

You have some really entertaining digressions in the movie: Mickey pining about prostitutes he used to know, Frankie telling the dognapping story … when you’re writing, do you know how far off on a tangent you’re willing to let a scene go?
I don’t. You start to get that sense when you put the film together. There is a certain amount of wastage, but that wastage does give you a sense that these people are real, that their lives continue beyond the scene. You really want to have that feeling. Sometimes you see a movie and you can really feel that it’s an actor putting in a performance. Someone said “cut” and they’re back in their trailer having a coffee or getting their hair done.

What’s your writing process?
I have this long process of getting to the computer. It takes me about a week to turn it on. I sort of sidle up to it. And I’ll start off writing an hour a day and by the end of it I work really fast. I can sit there for like 18 hours. Once I actually get into the swing of it, I like to try and write a screenplay really fast. There’s a certain sense of urgency that you have when you work that can translate to the script itself. I tend to get into a zone at a certain point. But a lot of writing’s not writing. A lot of writing’s going down dead ends that don’t go anywhere.

How much of this was dead ends?
How much do I throw away? Oh, shit. Well, I guess with this one, the script ended up being half of the first pass.

When you’re adapting something, do you ever get an ego about it? Like you want to instill the final product with more of your writing than the other guy’s?
No. I’m always trying to remove myself from a film. It’s great when you don’t recognize yourself in the movie at all. It’s almost the mistakes that I can’t get rid of that are my style. I always think that the film is something separate, and it wants to be what it wants to be and I’m trying to work out what it needs and what it wants.

The story with this is that you saw The Friends of Eddie Coyle on TV one night and thought, because it didn’t succeed financially, that George V. Higgins, who wrote the book Coyle is based on, was probably left alone by Hollywood after. And you were right. And then you started reading his stuff, and found Cogan’s Trade.
I can’t understand this obsession with new things. Everyone’s looking for the new book but they forget that there’s so much material that’s being ignored. You know, they’ll decide — like Cormac McCarthy, they’ll make All the Pretty Horses and it didn’t work, so, OK, “Cormac McCarthy doesn’t work!” And then they make No Country for Old Men, and it’s like, “Cormac McCarthy works! Let’s make Cormac McCarthy movies!” That’s the way that people tend to think there. People try to make hits. And I don’t think about that.

I’ve seen this movie described as an “anti-thriller,” and I think it’s true that, in someone else’s hands, this material ends up bloodier, or more explosive, or just, I guess, dumber. So I’m wondering: Did you consciously make this as a reaction to contemporary crime movies?
I guess it’s a little self-conscious. It’s trying to examine the genre that it’s presenting at the same time that it’s presenting it. What is a crime film about? Why does it appeal? It’s about capitalism — it’s about chasing a buck. But I don’t sit down and think, How can I make a non–film noir? You’re just trying to make a movie that you’d want to see.

Judging The X Factor: Britney Spears and Will.I.Am Show the Kids How It's Done (Badly)

TV Mailbag: The Mount Rushmore of Bad Characters on Good Shows, Stunt-Casting The Walking Dead, and the Mystery of Jon Hamm's Emmy-less Existence