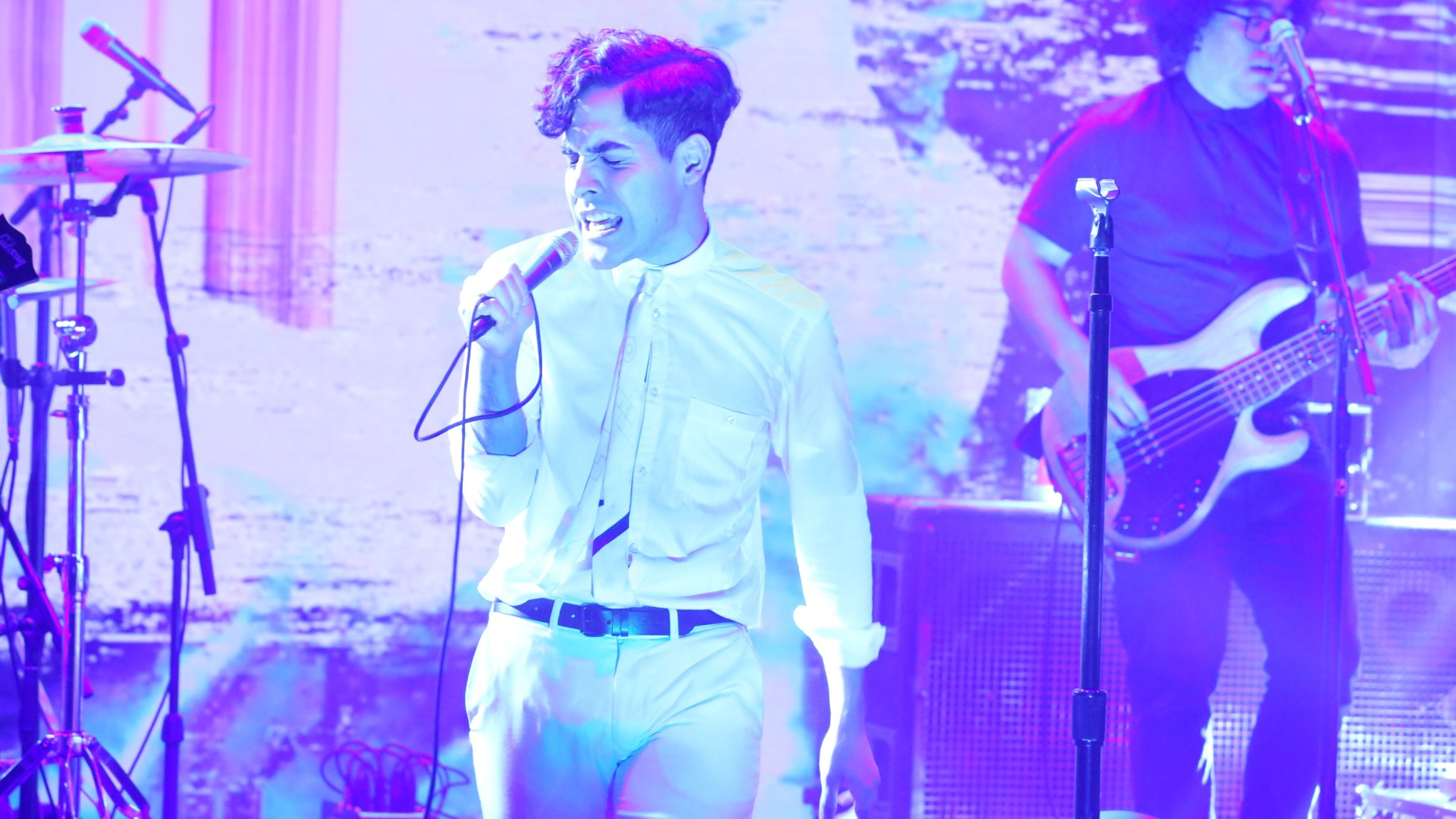 There was a moment during Neon Indian’s Sunday performance at this year’s FYF festival in Los Angeles when I could finally say I understood the work of Alan Palomo. As he flailed around in an oversize black suit, shuffling his feet in a combination skanking routine/pagan ritual, I not only appreciated him more for his major steps forward in stagecraft since 2011’s Era Extraña, but also for demonstrating that it’s actually possible to dance to his music.

This is not to say he just started dancing this summer. At this performance of “Polish Girl” at Lollapalooza 2012, he carts out that weird, jerky shuffle move a couple of times, but he seems far more at ease behind a console — an indoor kid stuck performing in a tap dance recital because his parents want him to put the Game Gear down and make friends. The crowd goes nuts when they realize what the song is, but then Palomo starts singing in that soft, mumbly voice and it feels like someone deflating an air mattress after a long night of drinking in a city that’s not your own. The songs from Era Extraña are sad. “Do I still cross your mind,” he asks in “Polish Girl” — an extended plea for attention from a former lover. Hard to know if I should do the Pogo or curl up into a ball and die from extreme self-loathing.

Contrast that with Neon Indian’s recent performance of “Annie” on the Tonight Show. A sweaty festival slot and a major national TV spot are wildly different, so maybe it’s better to compare the Tonight Show to Neon Indian’s earlier appearance on Late Night with Jimmy Fallon, another rendition of “Polish Girl.” The brooding, black setup for “Polish Girl” gives way to a bright, New Wave-y ’80s dance party for “Annie.” Fallon’s clearly one of Neon Indian’s biggest fans and has had them on for just about every big moment since the project began, which allows us to track their evolution from acid-tinged chillwave regret to the coked-out revelry of their third full-length, VEGA INTL. Night School.

In a way, Night School‘s first single and second track is the mirror image of “Polish Girl.” Palomo is still begging, but instead of appealing to his former flame’s sense of nostalgia, now he’s deifying a potential new relationship and pleading with her to return his phone call. It’s a creepy sentiment when factoring in the darker side of romantic obsession, but it encapsulates Palomo’s rebooted persona. Instead of a dancehall Morrissey, he’s fashioned himself an urban prowler with a startling inability to control himself around a pretty girl. “Dear Skorpio Magazine,” one of my favorite songs on the album, revolves around the protagonist writing in to ’70s Italian porno rag Skorpio about making eye contact with an attractive woman on the sidewalk. Not exactly Penthouse Forum-level erotica, but such is the world of single-minded, unattainable desire in VEGA INTL. Night School.

The album gets its title from Palomo’s tendency to call his evenings on the town in his adopted home of Brooklyn “going to Night School.” If you’ve been to Brooklyn lately, you know it’s not nearly as sinister as he describes on “Street Level,” unless you’re terrified of getting food poisoning from a soggy bodega chicken wrap at 4 a.m. Still, his vision of the expansive potential and the creeping danger of the wee hours speaks to something very primal. It’s quite seductive to imagine a glittering metropolis teeming with handsome, sexually adventurous young people living on the edge. These songs tap into a yearning for the days when major American cities were places broke artists could thrive and party and fall into bed with each other — when people didn’t spend most of their time Periscoping all the fun they’re having. Palomo’s lyrical imagery is preoccupied with neon lights, dirty shoes, graffiti, and crappy apartments — the accoutrement of the fresh-faced, casually hip striver.

There’s joy in this record, but it’s the kind of euphoria that comes after a bump and a shot of whisky. Palomo makes an effort to seduce, but that seduction is tempered by substances and a bit clumsy. “It’s easy to be the miser when no one’s the wiser,” a sentiment expressed on “Slumlord,” actually sounds like something an aggrieved companion would say while stumbling from bar to bar. Maybe they wouldn’t waste the time rhyming, but the sentiments would be the same. Part of the appeal of going out when you’re young and broke is knowing that your bratty excess is a form of shaking an indignant fist at an uncaring world. “Never coming home again till they see the world as I see you,” Palomo warbles on the proggy, dark “Baby’s Eyes.” On Night School, “home” isn’t really an option. The characters in these songs belong on the streets, and they’ll stay there until they can no longer remain vertical.

Songs like “Baby’s Eyes” are reminders that Palomo hasn’t completely cheered up, but at least he’s found a coping mechanism. In a press release put out in conjunction with the announcement of the album, he said “Most of what I’ve learned about human nature in my twenties has happened after dark. People are just kind of more honest then. More deliberate.” I’d like to think that my own nocturnal honesty comes from having one too many alcoholic beverages, but I’m willing to entertain the notion that the time of day influences my candor. It’s certainly true that Alan Palomo has found his muse in the dark corners and tantalizing dead ends of youth.

BigBang: The Perfect Boy Band for 2015

‘Spies’ Like Us: Steven Spielberg and the Cold War’s Forgotten Battles