My Navy SEAL of the Year: Max Martini in Captain Phillips 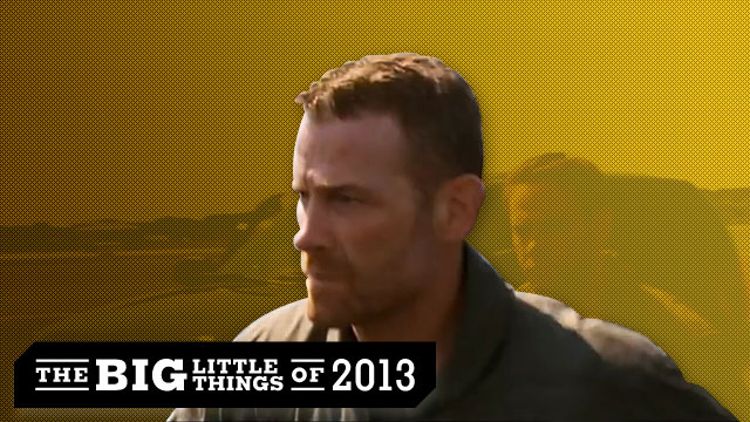 Max Martini plays the nameless Navy SEAL commander in Captain Phillips. Here is a fairly comprehensive summary of his actions in the film: About two-thirds into the movie, he arrives in a black SUV on a tarmac in Virginia and has a very important phone call, during which he is informed that a commercial ship has been hijacked by Somali pirates while making a run between Oman and Mombasa. During the conversation he says, more or less, “I understand.” A little while later, he jumps out of the same transport plane, parachutes into the ocean off the coast of Somalia, boards a Navy ship, and pretends to be a hostage negotiator while planning the extraction of Captain Richard Phillips from the Maersk Alabama lifeboat, where Phillips is being held hostage by four pirates. Martini is onscreen for less than five minutes, and his dialogue in the film’s final act amounts to “I need sights on target,” “I’m the negotiator,” “I need three targets green,” “release weapons on my command,” “speed up the tow,” “stop the tow,” and “execute.”

He does this all while standing on the cramped, neon blue bridge of the USS Bainbridge and looking at a little spiral notebook. He does not have any revealing character quirks. There are no moments when we get to know the real him. Like everyone else in this film, he has a job to do, and he does it as well as he can.

If you’ve seen Martini, that means you’ve seen a 43-year-old man in uniform. Six-feet tall, red-haired, with a face chiseled out of rock, Martini looks like he just stepped out of a black-and-white Life spread documenting the invasion of France. In fact, the last time he was in a Tom Hanks movie, that’s exactly what he was doing (Saving Private Ryan). Put him in camouflage, and all of a sudden you’re looking at the platonic ideal of a soldier: stoic, grizzled, honorable, and just mean enough.

On his IMDb page you’ll find pretty much every CBS procedural from the last 10 years, along with most of the shows that wish they were CBS procedurals — CSI, Person of Interest, Hawaii Five-O, Criminal Minds, Burn Notice, Rizzoli & Isles, Without a Trace, etc. If his face looks familiar, it’s probably because you’ve seen an episode of The Unit, David Mamet’s CBS series about a Delta Force–like special operations unit in the U.S. Army. Martini did 69 episodes as Mack Gerhardt. He was gruff, difficult, and often at odds with his wife, Tiffy.

Considering the way our popular culture is obsessed with superheroes, it’s not surprising how much big-screen time has been given over to Navy SEALs in recent years. These guys are, after all, probably the closest thing we have to actual superheroes. Their training is legendary, the missions they undertake often save lives, and their actions change the course of history. The motivations, morality, and ramifications of the war on terror are incredibly difficult to parse, but when it comes to Navy SEALs, most of us, rightly, are content to be in awe of their bravery and sacrifice. This has been well documented recently in films as varied as Act of Valor (made in conjunction with the SEALs), Zero Dark Thirty (the last act of which dramatizes Operation Neptune Spear and the killing of Osama Bin Laden), and the upcoming Lone Survivor (Peter Berg’s account of the tragic Operation Red Wings). Because these guys are heroes, they are often played by movie stars. Mark Wahlberg and Taylor Kitsch play valiant real-life SEALs Marcus Luttrell and Michael Murphy, respectively, in Lone Survivor and 2015 will likely see Bradley Cooper play Chris Kyle in American Sniper. Actual SEALs are filmed like characters in a Michael Bay movie in Act of Valor.

Captain Phillips is different. Its hero is a pudgy middle manager, its villains are khat-addled fishermen turned pirates. There is no mystical allure to the sea — it’s just a big blue highway populated by freighter ships full of disgruntled union employees, patrolled by drones looking for trouble and souped-up skiffs providing it.

When the SEALs arrive, they come attendant with the kind of Inception-brongs that signal “Yo, the SEALs ARRIVED,” but by the end, with the muted applause punctuating some truly outrageous on-water sniper-work, they are seen as just another strata of employees. Are they heroes? Sure. But in this movie, that means they’re basically janitors. And Max Martini is the stoic head custodian.

In this sense, Martini’s performance is perfect for the film. Not unlike Hanks and Barkhad Abdi (who plays the pirate leader, Muse), Martini does just enough to be noticed, but not enough to distract from the gripping narrative. When he walks down a hallway or makes his way down a ladder, people clear out. They do so out of deference to the character’s status, but Martini — rolling through the scenery like an American muscle car cruising down a drag at 2 a.m. — also demands attention and respect. It’s reminiscent of the supporting performances of Warren Oates, Ben Johnson, and Harry Carey Jr. in genre movies from Sam Peckinpah and John Ford. Those directors knew that if you populated your film with believable, charismatic character actors, they would only deepen the world you were trying to create. That’s what Martini does for Paul Greengrass and Captain Phillips.

Masters of Sex: The 'Phallic Victories' of One of the Best Shows on TV