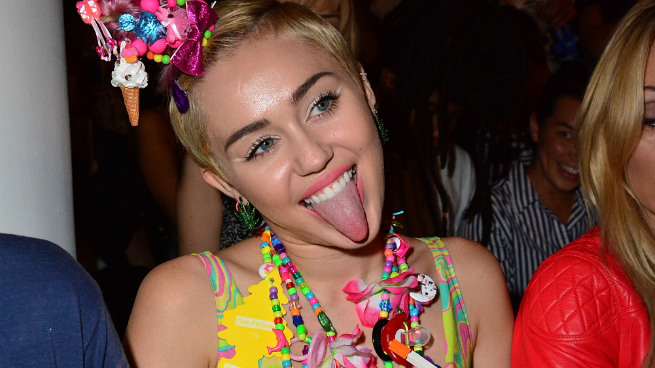 Just when it seemed like Miley’s “urban” phase had wound down for good, she decided to do one last ignorant thing to prove she had learned nothing from the yearlong controversy centered around her appropriation of black culture and bodies of color. During her show in San Juan, she performed her verse from “23” with a giant fake posterior that looked suspiciously darker than Miley’s real derriere, apparently having learned nothing from (or having simply ignored) Katy Perry’s tour controversy earlier this year. What is Miley thinking? Did she think she was just paying tribute to Nicki Minaj? Was it a poorly thought-out, passive-aggressive gesture meant to mock her own insecurities over having no butt, like Taylor Swift’s failure to twerk in the “Shake It Off” video? Whatever her logic was, Miley really showed her ass here in more than one way, especially after having somehow made us think she might be done with this bullshit by now. It was as tone deaf as Vogue’s declaration that big booties are suddenly “in.”

Miley has already let it be known that she is over her own brief flirtation with hip-hop culture, and has moved on to a new ’90s raver-hippie fusion style called “Dirty Hippie,” which she debuted at New York Fashion Week with Jeremy Scott. Her stage show, of course, still reflects last year’s fixation with Dirty South hip-hop, but Miley has apparently chosen to let us know she’s over the controversy surrounding it by pissing off anyone who defended her right to twerk. Which goes to show that her superficial obsession with rap culture never matured into any kind of understanding about why people might take issue with that obsession. She declined to listen to any of the dissenting opinions about why her behavior was not just good, clean fun, and so she never became any more educated about what made it a problem. She has just discarded her last phase like a cicada shedding its skin, and moved into doing acid, “gluing a bunch of junk to stuff,” and covering Led Zeppelin — a band with its own tetchy relationship to black music.

It’s disappointing, because Miley’s platform is so large and she’s been on it for so long now, and when it comes down to it, she is a talented singer and performer. It’s not anyone’s job to educate Miley except Miley’s, and she clearly took a “middle finger to my haters” view toward all criticism of any kind. To see white pop stars like Miley, Katy, and Taylor shrug off justifiable complaints from women of color with an eye roll of silence or dismissal is infuriating. For Miley to double down on baiting that kind of criticism by literally affixing a fake brown ass to her body onstage is insane, like a white comic insisting that using racial epithets is the epitome of freedom of speech. Ignorance isn’t illegal, and neither is hurting people’s feelings. But as a would-be hippie, Miley should work on developing her sense of empathy and learning how to see things from other points of view (and probably stop hanging out with Wayne Coyne so much). Just because you can do something doesn’t mean you should. And just because something you did provoked outrage doesn’t automatically make it transgressive. Nothing could be less outrageous than reinforcing a fucked-up status quo.