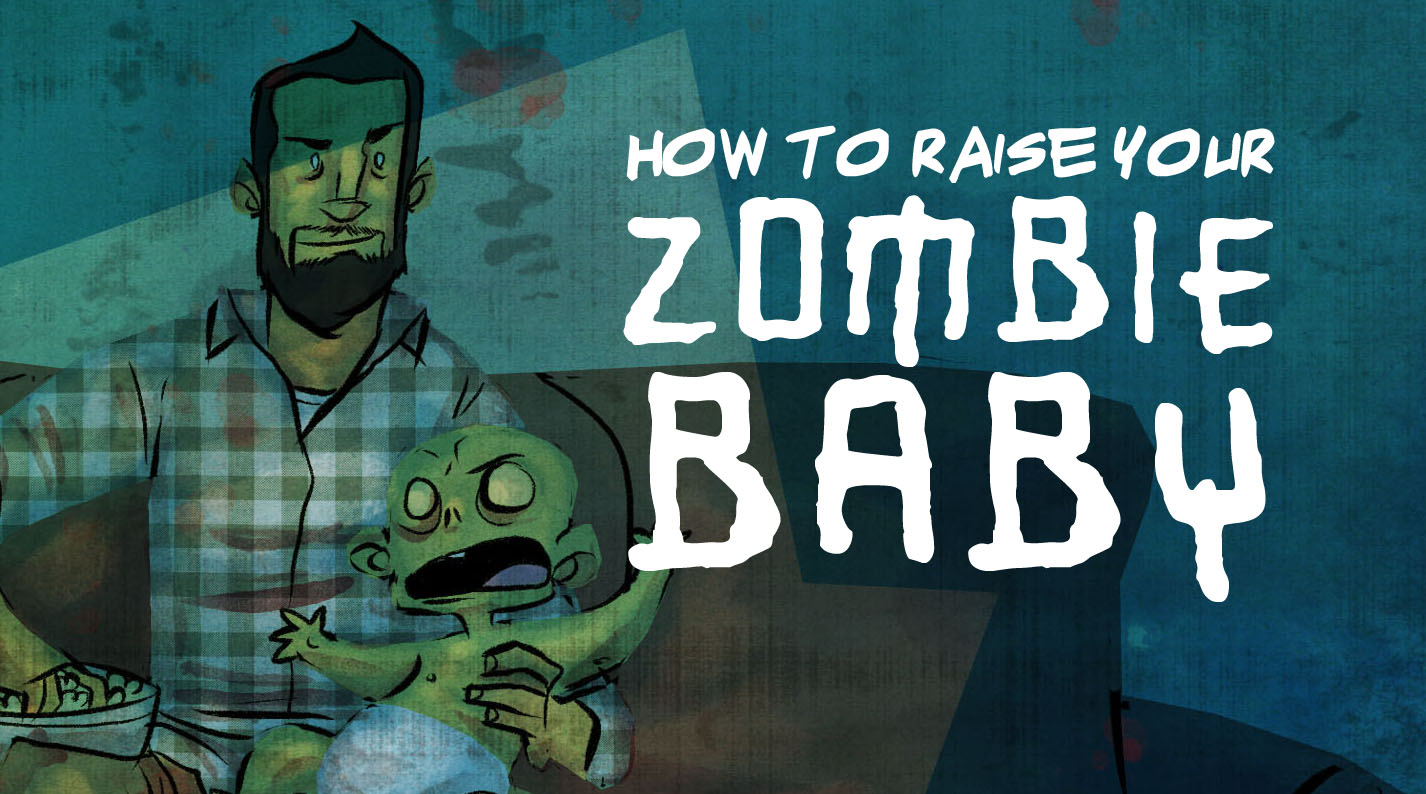 This past Friday, a new Syfy TV series about a group of people trying to survive a zombie apocalypse premiered. The show is called Z Nation, which is a title that is both a good idea and a bad idea, and also perfect because that is also an appropriate way to describe the actual show.

We could probably spend several hundred words telling you all about Z Nation, but that seems unnecessary because you can know everything you need to know about it in just 51 of them: its characters very seriously say things like “He might be our last best hope to save mankind”; DJ Qualls is in it and plays a character who is supposed to be cool; the main guy — the show’s reluctant hero and the group’s leader — is the drummer from That Thing You Do. That’s the kind of show it is. It is basic and silly and toothless. HOWEVER, there was at least one intellectually interesting moment during its premiere.

Because that’s what happened in Z Nation. 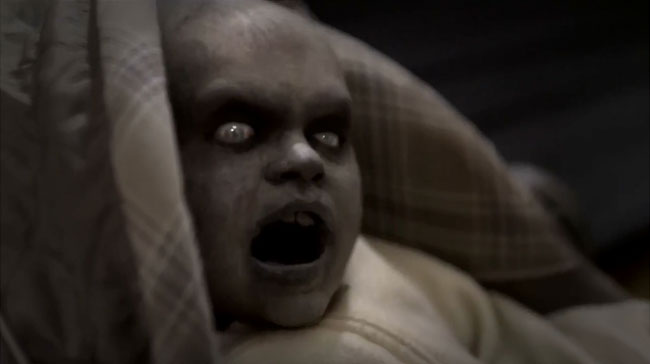 While voyaging, the group found a normal baby in a car seat in a car, took him out, tried to protect him during a zombie attack, were unsuccessful, then were left to deal with their new bizarro reality. There were two ways for them to handle the zombie baby situation:

1. Leave the zombie baby. Half of the group argued for this option. The zombie baby had been trapped inside of a small building, so, really, everyone could’ve just walked away and abandoned him there, letting whatever was going to happen, happen. This was troublesome because, per the half of the group in favor of this option, the baby was sad and suffering. So what they wanted to do was …

After a few moments of arguing, they decided it was best to kill him. (They eventually shot him in the face with an assault rifle as he was eating one of their friends, as zombies do.) And that was supposed to be the best decision. But guess what? It wasn’t. Because there was actually a third way for them to handle the situation:

3. Raise the baby. That’s what you do right there. You don’t just abandon a baby because he has become a zombie. For one, he’s still a baby. You gotta take care of him. This shit ain’t that hard: Babies need to be taken care of. He’s a zombie. Big whoop. Give him a lollipop. He’ll chill out.

Second, he was a normal baby when you found him. YOU let him get turned into a zombie. You can’t ditch him after that. “Hey … oh, shoot. Dang. The zombie bit you? All right. Um, OK. That’s my bad, baby. … So anyway, I gotta go. Good luck.” That’s not the move. The baby I have at my house, he was super cute and sweet when we brought him home. Now he spends the whole day trying to bite his brothers and punch me in the wiener. I can’t just give up on him when he’s a little unpleasant. He belongs to me, just like that zombie belongs to you. He can grow up to be anything. He could be the first zombie president or the starting zombie QB for the Giants. Who knows? So: Raise that zombie baby.

Here’s an illustrated guide to doing exactly that. 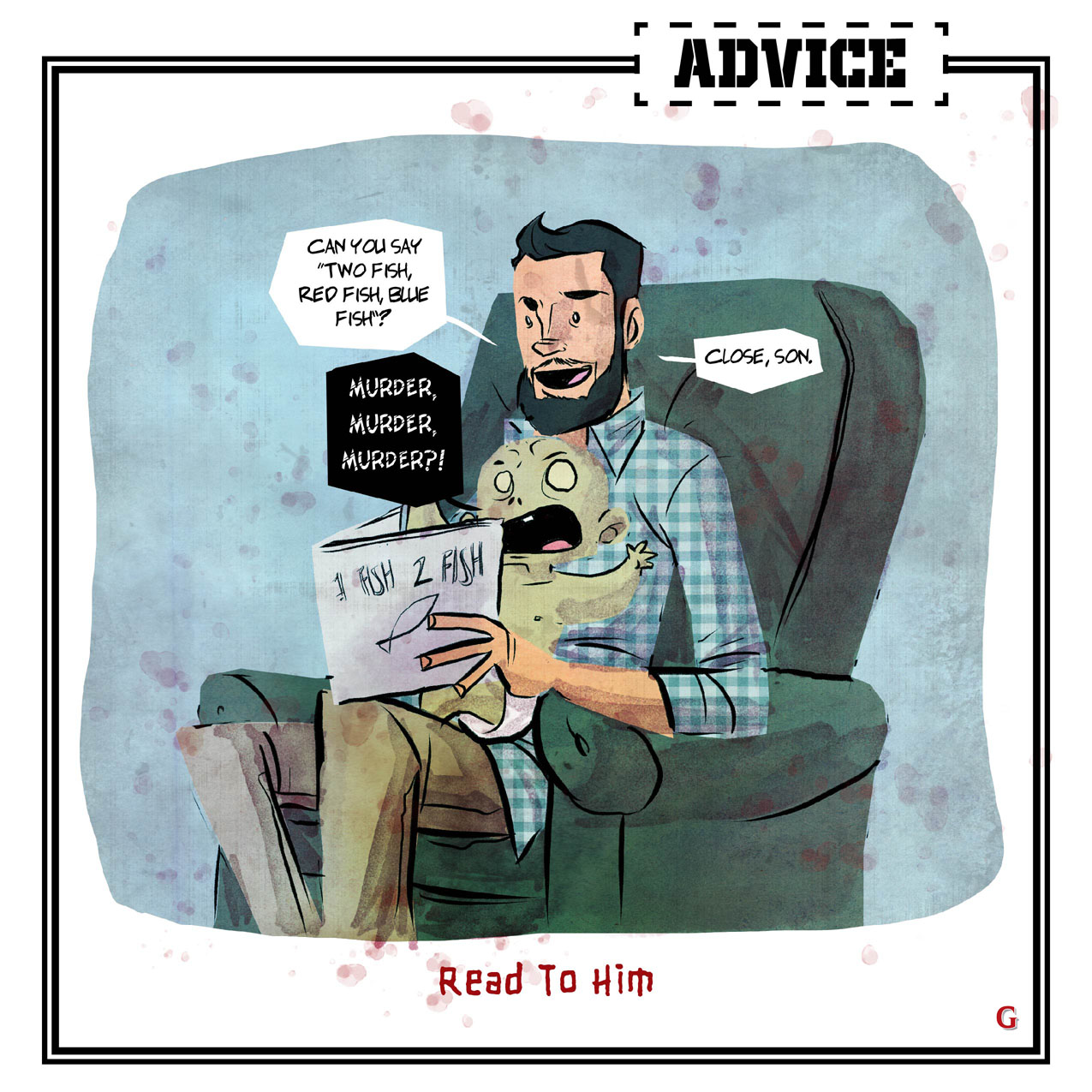 You want your zombie baby to be smart, because it’s a very competitive job market right now. I spent, like, the first four years of my sons’ life only teaching them how to spit and how to throw things (footballs, punches, bachelor parties). When they got to elementary school, there were already kids in there who were writing novels and doing calculus. It was like the school was full of a bunch of Good Will Hunting Matt Damons and here come my two Ben Afflecks. My kids are hella behind. I’m not making the same mistake with my zombie baby. Bet that. 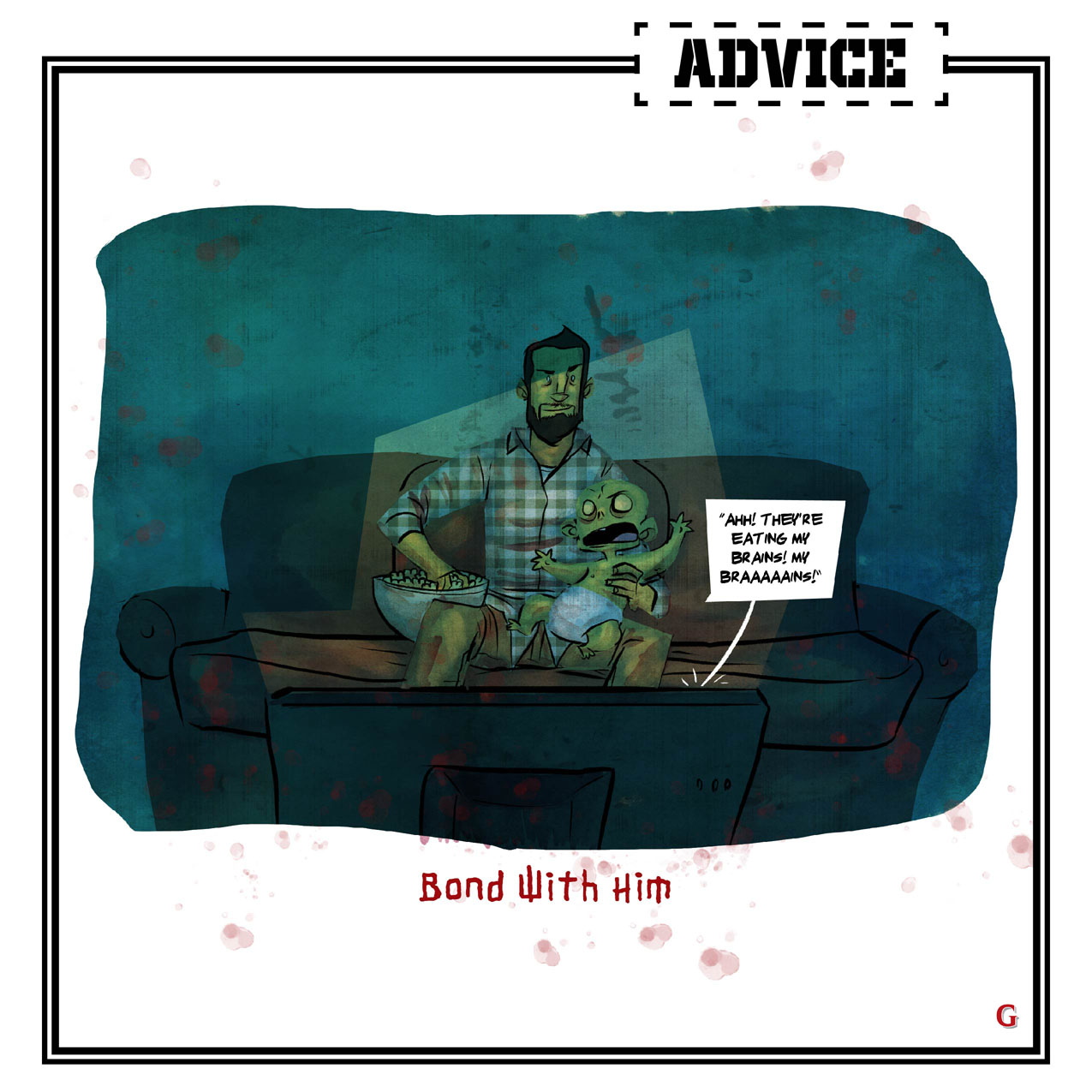 It’s the same as with a normal baby, except maybe it’s even more important now, because if your zombie baby loves you, he’ll probably be less likely to try to eat you in your sleep if he manages to get out of his zombie baby cage.

Teach Him Not to Eat Cats 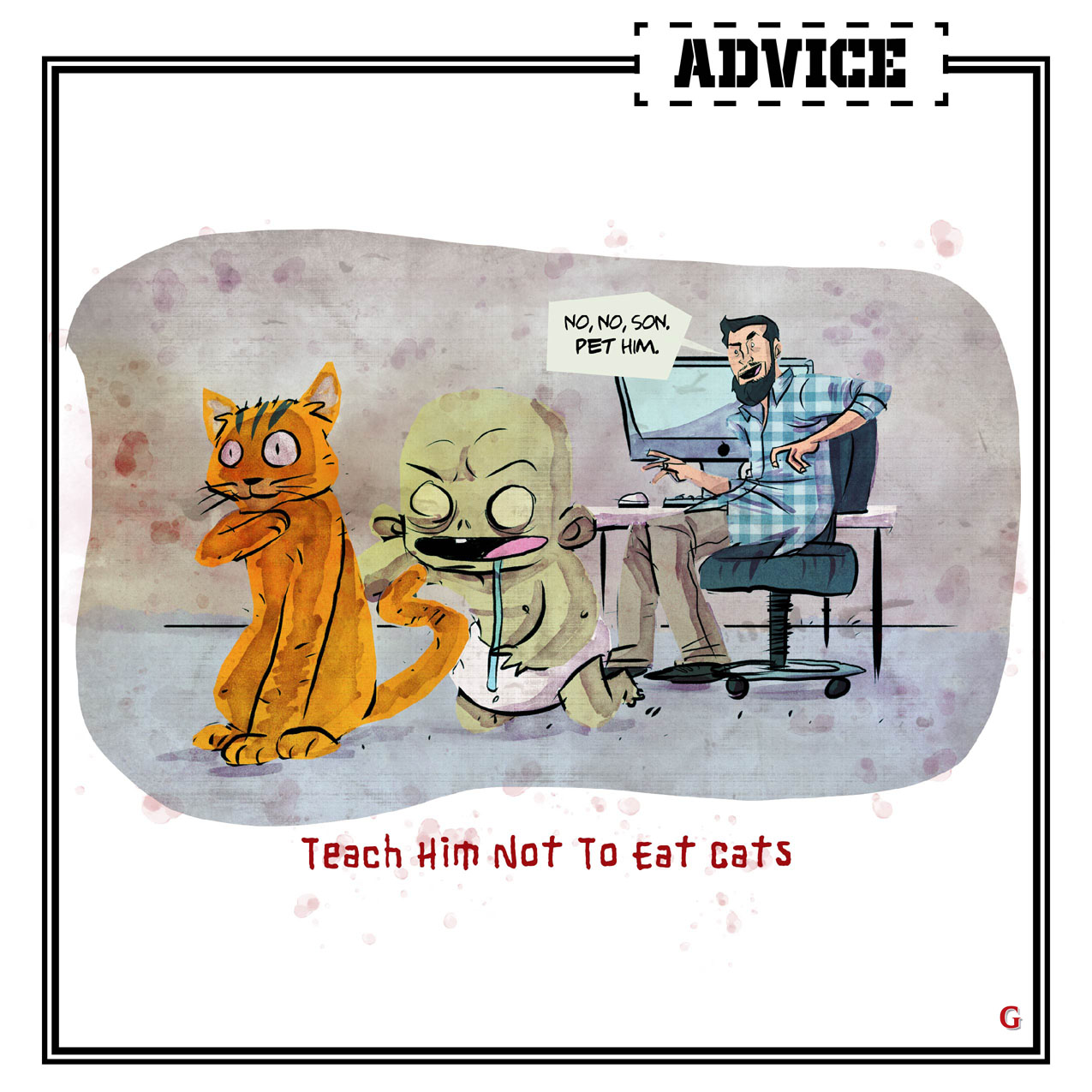 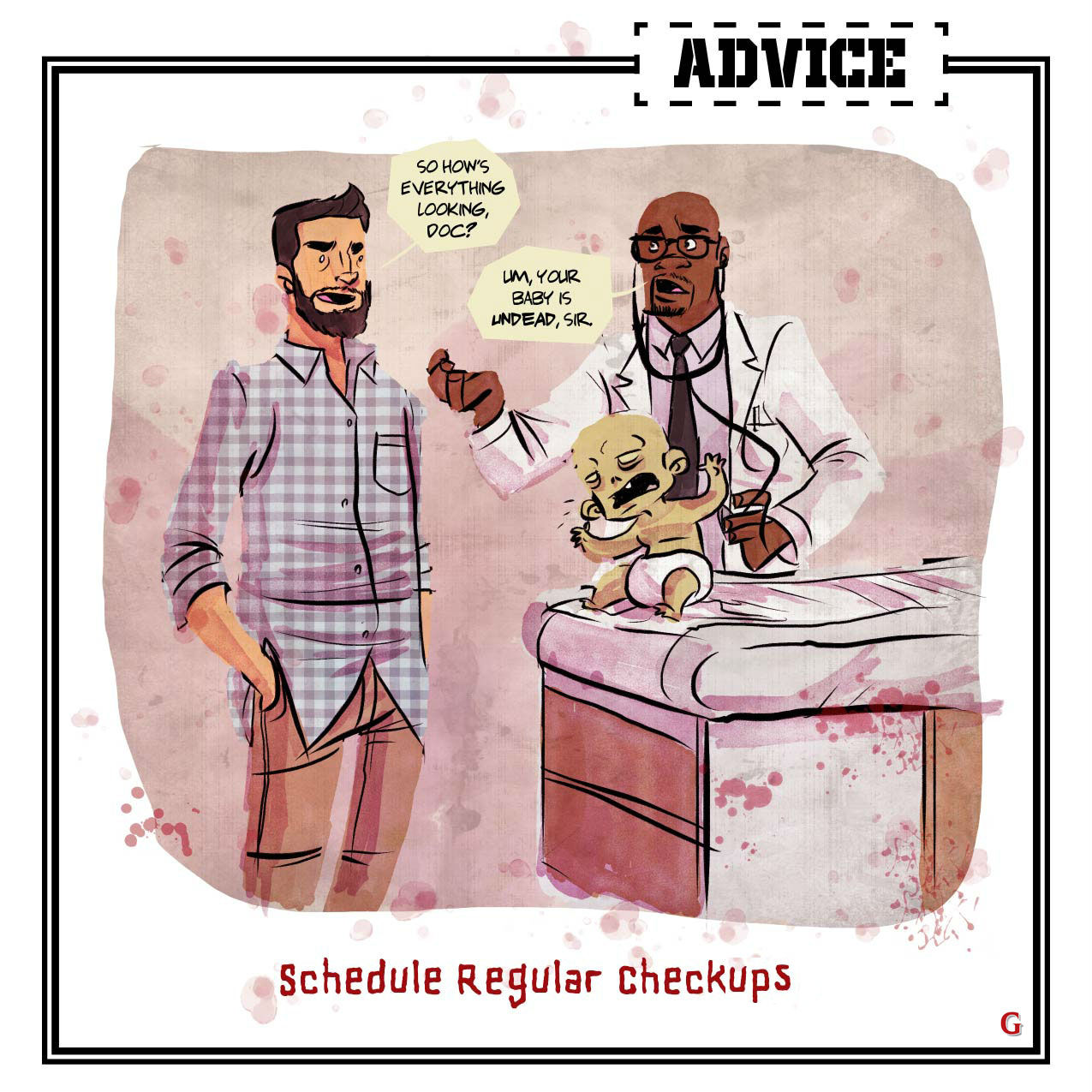 You’re supposed to take your human baby to the doctor once every three months for checkups, so definitely do the same with your zombie baby. The doctor may remark on how your baby’s flesh is deteriorating and his eyes have turned to dust clouds and so on, but you tell him you’re the one raising your baby, not an overprotective doctor, and the last time you checked this was America.

True story: I got into trouble at the doctor’s office once because he asked me if my sons were riding bikes yet and I said “Yeah,” and then he asked me if I made them wear helmets, and I said “No.” He said, “They really should, Dad,” and was very condescending about it. I said, “Yeah, I’ma do that immediately as soon as we get home, Doc,” and I was also very condescending. Then we just stared at each other for a moment. Then the boys and I got up and left and I did not pay the copay. Then we went home and rode bikes and I definitely did not make them wear helmets. That’s a little thing called standing up for what you believe in.1 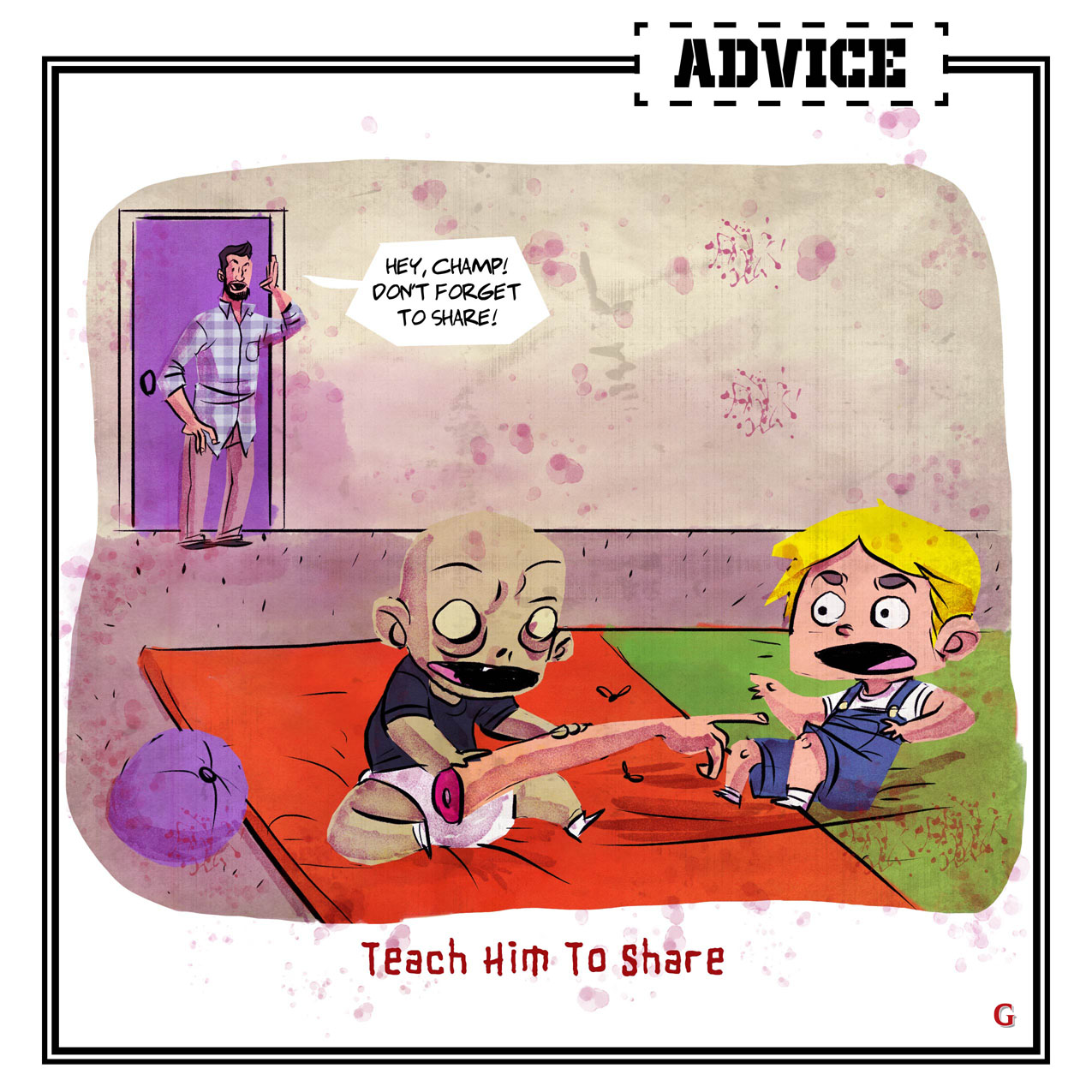 I kind of don’t agree with this one. I get the whole Raise Nice People thing, but a lot of people are not raising nice people. A lot of people are raising real and true assholes. We were at an open house at my sons’ school last year and there were these two little girls playing with these magnifying glasses. They were super cute and sweet. And so this little boy walks up and asks to see one, and of course the little girl gives him hers because she is a gem. And do you know what happened? He snapped it in two and then tossed it to her and ran away. She started crying. It was the most brutal thing I’ve ever seen. I’m not teaching my zombie baby how to share.

And probably don’t watch Z Nation, either. Do not support their anti-parenting propaganda.