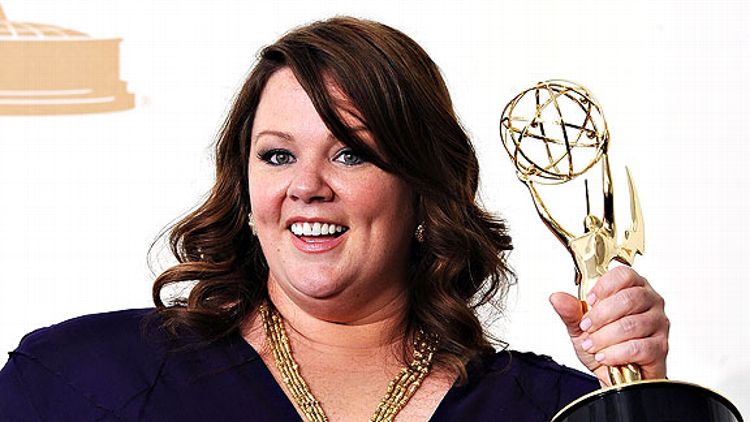 Melissa McCarthy is having an excellent week: On Sunday, she won the Emmy for Best Comedy Actress, and yesterday, CBS picked up a sitcom she co-wrote with her husband, Ben Falcone. (It is, in her own words, “about a woman in her mid-40s who has a spectacular midlife crisis” and “what a midlife crisis means for a woman, which is very different from [what it means for] men.”) If this lucky streak continues, today Melissa McCarthy will probably enter and win a very lucrative raffle. Grade: A [Deadline]

Simon Cowell is working on a stage adaptation of The X Factor for London’s West End, and has reached out to British comedian Harry Hill and comedy music producer Steve Brown to drum up ideas for what such a monstrosity might look like. This is great news for British pop star Cheryl Cole, who now has one more iteration of X Factor from which she can be fired. Grade: D [Deadline]

Lindsay Pulshiper, who has appeared on True Blood, will replace Hillary Duff in the Bonnie and Clyde remake (Duff was, depending on who you ask, let go either because she’s pregnant or because of scheduling issues). This is a bittersweet moment for Pulshiper who is, just like the rest of us, a really big fan of The Lizzie McGuire Movie. Grade: C [HR]

Celebrity stylist June Ambrose, whose past clients include Kelly Ripa and Mary J. Blige, is getting her own VH1 show, The June Ambrose Project, which will feature Ambrose both at work and at home. Bad news, June: Your show sounds way too normal for VH1. Grade: C [HR]

Twilight’s Cam Gigandet will star in TNT’s Western Gateway, as Jake Flynn, a young man leading his two brothers to seek vengeance for their father’s death against a powerful, corrupt cattle baron. When reached for comment, Gigandet explained he took the role because of the opportunity it will provide for more people to actually learn how to pronounce ‘Gigandet.’ Grade: C+ [HR]

The Expendables 2 has momentarily paused its stockpiling of aging action stars (the latest additions include Jean Claude Van Damme and Chuck Norris) to hire a young person: Liam Hemsworth, star of the upcoming The Hunger Games movies, has signed on to play a sniper. Word of advice, Liam: In order to avoid on-set confusion, do not discuss whatever helpful new iPad app you might have recently downloaded. Grade: B [Variety]

Cameron Mathison and Lindsey Hartley are the first actors to sign on to reprise their characters for the online version of All My Children, which will continue the show’s storylines past its network cancellation this Friday. Your grandmother is calling. She needs you to explain the Internet. Grade: B [Variety]