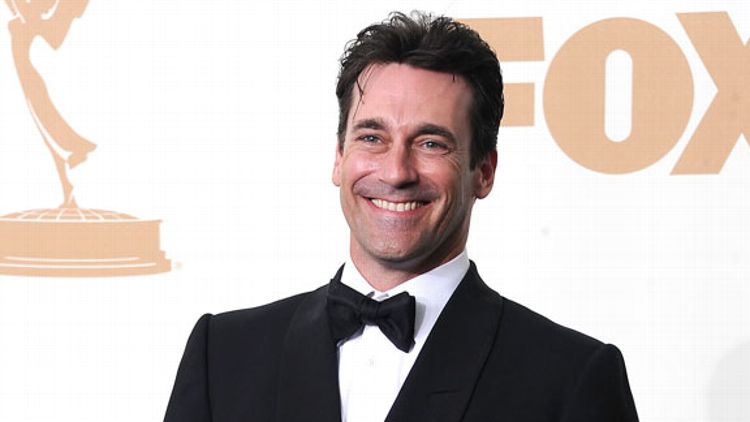 It’s not for lack of popularity: the guy is the de facto mayor of Hollywood these days, beloved by the cool kids and dumb jocks alike. Furthermore, his performance as Don Draper on last year’s tremendous fourth season of Mad Men was indisputably his best, showcasing an impressive ability to hit rock bottom while still delivering remarkably sound opinions on a market-based capitalist economy. And after three years of serving as the devastatingly handsome bridesmaid (No Melissa McCarthy) to Bryan Cranston’s unfeeling award-reaping machine the field was finally cleared on a technicality — Breaking Bad didn’t air any new episodes during the qualifying time period, though many thought Cranston might still win on a write-in vote for his remarkable, chameleonic performance as “Julianna Marguiles.”

And yet Jon Hamm did not win last night. An even more unlikely candidate did, in the form of the equally-deserving, slightly less handsome Kyle Chandler. This is hardly a gross miscarriage of justice, but it is perplexing. Mad Men is the most decorated show of these waning days of the golden age of television — last night it won its fourth consecutive statuette for best drama series — and Don Draper is its signature creation. Historically, the Emmys have rarely differentiated between star and solar-system — James Gandolfini won three trophys for his work as the titular Soprano while Candice Bergen racked up a Cranston-esque five statues for firing secretaries as Murphy Brown — but there have been a few exceptions. Last night, Steve Carrell officially went Emmy-less for his seven seasons as the public face of The Office and Hugh Laurie, whose charismatic faux-American growl could still make us tracheotomize ourselves, is heading into his final year of a dramatic 0-fer streak. But Hamm’s omission rankles, especially since Cranston will no doubt return to reclaim his prize next year (and the two years after that). If current voting trends hold, Hamm won’t actually have a shot at taking home the gold until after Mad Men’s final season in 2014 — when Don Draper will no doubt be a sideburn-having, sad-fondue-party-hosting shag-carpeted seventies-shell of the man we’ve come to know.

Could it be that Emmy voters begrudge Hamm his looks? That they assume anyone as casually debonair as Hamm was last night must not be acting when portraying a handsome, ladykilling alpha male? If so, it’d be a shame. As our friends at Videogum have often gleefully pointed out, the real Hamm seems more Goofus than Gallant. Yet without his nuanced, considered performance serving as anchor, Mad Men would be as light and flighty as Pan Am. (Or, worse, The Playboy Club.) Hamm is clearly a good sport and a team-player — the sort of guy who will say the real honor is in the show winning, not him individually. So we’ll say it for him: Jon Hamm deserves to win an Emmy, America. And if he has to wait three more years — or has to circulate DVD copies of Bryan Cranston’s starring turn in Honey I Shrunk The Kids: The TV Show to do it — so be it.

Truly, it’d be a shame for an actor so talented in a role so indelible to have nothing to show for it at the end of the day. Other than international acclaim, a cut-glass jawline, and millions of dollars in the bank, of course.