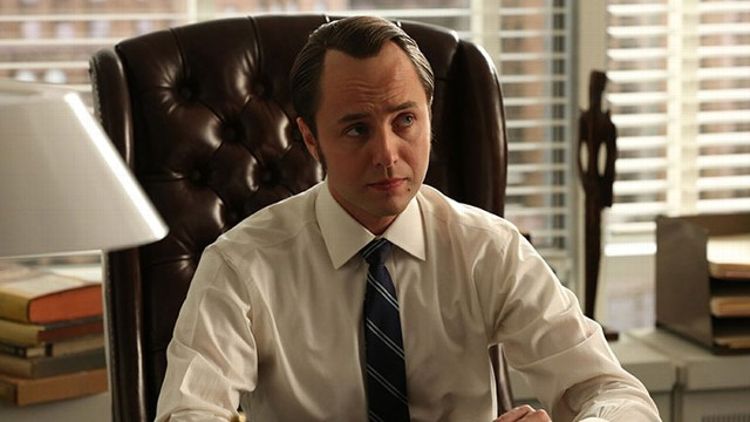 It started out with the best of intentions, and ended with a stabbing. I’m talking about the ’60s, of course, but also Peggy’s relationship with Abe. The merger is looking increasingly like a war over Peggy of Troy, but Peggy recognizes that no war is worth its weight in bloodshed. The chaos at SCDPCGC benefits neither Don nor Ted. It really only hurts the company. Peggy wasn’t just trying to be diplomatic telling Ted and Don their ideas are equivalent. It was a no-win situation. No matter who she backs, it will piss off her other father figure. She can’t please one without angering the other, and she can’t possibly satisfy them both. Ted greases her up while Don dresses her down, but neither one of them talks to her on her actual level. They tell her they care what she thinks, but they won’t show her they believe that.

Relationship dynamics are already complicated enough without office power structures overlaid on top. Peggy hopes that her secret flirtation with Ted and its very abrupt end won’t affect their setup at work, but of course it will. Just like Megan hopes turning down her boss’s wife’s sexual advances doesn’t mean one or both of her soap opera twins, Colette and Corinne, will be suddenly killed off. What Megan assumed was sage motherly advice from her co-star turned out to be a come-on. What Peggy thought was an open invitation to Ted’s bedchamber turned out to be time-sensitive. What Roger hoped might be a spontaneous drop-in visit on Joan turned out to be a rude awakening that she has moved on and into younger (if not tanner) men. Don and Betty were the only ones who seemed to know exactly what they were getting into: each other. While “groovy” Ted first seemed quite laid-back compared to Don’s aggressively confrontational style, it turns out he is just another sort of awful: the passive kind. He’s just as bad as Don when it comes to valuing the chase over the prize it brings. It is not enough to win — the other guy has to lose in humiliating fashion. While Peggy was too honorable to cheat on Abe with Stan or Ted, she bottled up her resentment of Abe until it accidentally gushed to the surface. She rejected a surfeit of potential partners while she was otherwise occupied, assuming they’d still be there if and when she was ever ready for them, only to find that her taken status was the cornerstone of her appeal. Single and ready to get Chaough’d, she gets rebuffed with a cruel fake smile. Had she made a lonely trek to Stan’s office, she probably would have opened the door to find him still in the middle of making weeks-long marathon Tantric beard-love to Wendy Gleason.

Don is absolutely correct that nobody will ever choose margarine over butter, no matter how high-end and expensive the margarine is. The way to convince consumers to buy margarine is not to emphasize a price point, but to lean on its supposed health benefits, even if you have to make them up. Around the turn of the century, dairy lobbies were so threatened by their competition that they successfully got laws passed forbidding the addition of yellow color to margarine, making sure it couldn’t pass visually as butter. Some proposed laws suggested that all margarine should be tinted pink to make it look even more inorganic. Some companies sold their margarine with a packet of yellow food coloring included, so that customers could bootleg their own yellow margarine. Margarine use peaked during World War II while dairy products were being rationed. Who knew we’d learn so much about the history of condiments from a television show? Has Peggy ever had a good week in her life? I’m talking a whole week, uninterrupted by work or family interference or stabbings. The violent moments on Mad Men tend to be strangely humorous. It helps when the injury turns out non-fatal. Abe may have lived though his character assassination, but it was hard to watch nonetheless. His idealism about moving into the new bad neighborhood is tempered by the reality of getting stabbed when he gets off the train and stabbed when he comes home to his girlfriend. I was disappointed that Peggy alerted Ted to her new single status by explaining that her boyfriend had dumped her while she was still inside him (via a knife). While Abe chastised Peggy for suckling at the teat of capitalism from their very first encounter, it was always more of a gentle ribbing than a definitive character judgment. In the wake of getting stabbed by the paranoid Peggy, Abe sees that there will be no meeting in the middle for them.

Peggy sides with the cops because she has had respect for authority drilled into her brain all her life, and the alternative of siding with the kids throwing rocks through her window is too unsettling for her. Nowadays when someone says “fuck the pigs,” they are usually talking about Angry Birds. I’m sad to see Abe go, even though it opens up new plot possibilities for Peggy. Abe and Peggy’s relationship was a nice counterbalance to all the narratives that depict career women as unlovable spinsters whose uncompromising ambition ruins their personal lives. At least Peggy ruined her own personal life the most old-fashioned way possible: with a makeshift spear. Abe loses Peggy when he asks her to help him type up the story in which he is going to make her look bad. Despite the necessary mass delusion that it’s possible to entirely compartmentalize work and home, it’s really impossible to stop them from eventually bleeding into each other. The passage of time casts a new light on Roger and Joan’s relationship. It’s a light that makes Joan appear as radiant as ever, and beams unflatteringly on Roger so that he looks incredibly old. Particularly when he’s standing next to a perfect male specimen in patterned short shorts by the name of Bob Bunson — er, Benson. The tables have turned, and they are diaper-changing tables. Roger takes a sudden interest in his biological son after being forcibly ejected from his grandson’s life. He mostly just wants an excuse to see Planet of the Apes as many times as possible. So many of the interactions on this show are complicated by the secret thought, I can’t believe I ever had sex with them. It feels less regretful than flat-out absurd. It’s dubious that the more mature Peggy and Pete would ever make the same mistake the younger Pete and Peggy did, but that doesn’t mean they could never make a different, more mature kind of mistake. Just look at Don and Birdy Draper!

Everyone seems infinitely more desirable when someone else wants them too. No longer able to lift Sylvia from Arnold Rosen, Don cheers himself up by taking Betty off Henry’s possessive hands for a night. Henry Francis tolerated Betty’s slide into frumpiness well enough after he intercepted her from Don, but he is much happier that she’s a trophy again, even getting turned on that his colleague made a gross pass at her. Having lost and regained the trim figure and beautiful face that enabled her modeling career, Betty is fully aware that there is a huge difference in how she gets treated by men. The most unbelievable part of this episode was Don driving all the way to Bobby’s camp for the night. Since when does Don participate in parenting? Is this his way of overcompensating for the “Grandma Ida” incident? It still seems to center around Don’s boner’s needs, as always. Don’s sudden bout of sing-along family bonding with Bobby and Betty only seemed sweet until later, when you realized it was foreplay. Don and Betty’s random night of passion reveals another important wrinkle in Don’s psyche. He just wants to cuddle. Don has long confused sex with intimacy and been miserable for it, which the wise-with-experience Betty helps him to figure out during their cabin tryst. Betty, of course, only wants Don because it proves she is better and more desirable than Megan, despite being older and lacking Megan’s joie de vivre. Don and Betty are well matched in certain ways; they’ve seen one another at absolute rock bottom, and they both hold grudges until the end of time.

Double identities seem to be contagious. The briefly brunette Betty went back to blonde, but raven-haired Megan put on a Carol Channing wig to transform into an unconvincingly platinum French siren for her show. Roger tries swapping one patrilineal relationship for another and finds himself denied. Peggy posits that Don and Ted are brothers in stubbornness, separated only by the narcissism of small differences. Don’s approach is undermining while Ted’s is artificially inflating, but they’re both manipulative. Their words may be worth large amounts to their clients, but when it comes to adhering to their actual meaning and following through on a promise, they’re worth less than nothing.