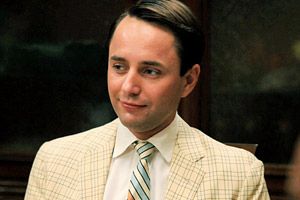 I don’t quite understand what it is that compels me to type this letter. Perhaps it is to leave some vague reason for the actions I have recently performed. I don’t really understand myself these days. I am supposed to be an average reasonable and intelligent young man. However, lately (I can’t recall when it started) I have been a victim of many unusual and irrational thoughts. —From Texas sniper Charles Whitman‘s suicide note

Oh, Pete Campbell, you poor bastard. Crying in the elevator in front of Don and inspiring short stories by Dave Algonquin. All you wanted was to climb to the top of the glass-paneled mountain, and now that you’re there all you want to do is jump off. The horror-movie tone of last week’s episode spilled over into this one like blood slithering under a bed. The driver’s education video that aroused Pete’s tragic case of ephebophilia was Signal 30 (also the name of the episode), a shock crash-porn scare film from 1959 that shows real footage of car accidents and nightmarish mutilations while a passionless narrator intones that the victims could have avoided their fate. The California equivalent is graphically titled Red Asphalt, and was still shown in high school driver’s ed classes last I checked. Nothing like a flickeringly lit dark room to give you ample time to perv on lithe young classmates and imagine that you are 16 with your whole life ahead of you instead of an adult whose defining choices have all been made. The cartoonishly innocent teenage girl Pete creepily crushes on (she gets drunk on vanilla extract and wears daisy sandals) is just making a little hallway small talk because they haven’t yet invented cell phones for her to pretend to be on. She’s too nice or simply young to shut him down properly, and too naive to know he will definitely check out her ass when she shuffles away down the hall.

At some time concurrent with the move to Cos Cob, Pete became middle-aged and died inside. He has the respect he demanded (sort of), the wife and child he supposedly wanted. But nobody really likes him, least of all himself — and he hates Trudy for insisting otherwise. The couple’s former closeness seems to have worn away and he seeks to confide in all the wrong people; to Don, to a lovely unassuming teenage girl who will obviously prefer the slick advances of an age-appropriate muscled bohunk named “Handsome.” I didn’t think there could be a home more claustrophobic than Betty and Henry Francis’s dark mansion, but I hadn’t been to the Campbells’ busy patterned suburban nightmare yet. The plaid sport coats and bright party dresses looked more sickly than sharp. The interiors already seem out of date — ditto Trudy’s full-skirted hostess dress, even though it was fashionable just a few years ago when Betty Draper favored it. Talking at the dinner table is a competitive sport where Don zings Ken, nobody laughs at Pete’s joke about varmints, and Ken is nakedly uncomfortable with his wife praising his writing. Somewhere in the suburbs, kids are smoking pot and listening to The Rolling Stones, but in the confines of Cos Cob the grown-ups are trying to talk about murder sprees over a soundtrack of very loud Beethoven. On the bright side, Don and Megan now have the shared sense of humor of a real couple, bonding over their inability to remember Alex Mack’s name (CYNTHIA!) and pulling over for roadside sex after getting wet in the kitchen.

References to death abound. Cars spin out and slice off limbs, Don doodles a noose in his notebook during a dull meeting, Ken and Pete recreate a shot straight from Hitchcock’s Rope while they talk about how a man could fit inside the giant stereo. (The corpse of Ben Hargrove, perhaps?) References are made to Pete’s gun and University of Texas tower sniper Charles Whitman (WHITMAN!). Mad Men is one to show a gun in the first act and then never make reference to it again, but I wouldn’t be too surprised if somebody blew his or her brains out before the end of this season, and I wouldn’t be too surprised if it were Pete (which is not to say that I wouldn’t be very sad).

At the office, Roger tries to instruct Lane on the subtle intricacies of seduction, but something gets lost in translation. For the Brit from Jaguar, pure freedom of expression is reserved for drunken soccer celebrations and lobster-bibbed dinners with American ad execs. Just like Lane, the Jaguar guy wants to see himself as a swinging-’60s American rather than an uptight old-world European, and Lane is a mirror that reflects the very qualities he wishes to disavow. Roger makes the point to Lane that you should never close before dessert — any sooner and you risk the mark losing interest, knowing the decision of whether you’ll be going home together is now theirs to make. Denying them affirmation of your intent keeps the ball in your court. The tension within the office often comes from the Sterling Coop guys all trying to close over one another, whether it be with a new secretary or a new account.

Ben Hargrove, a.k.a. Ken Cosgrove, has become that rarest of commodities in the Mad Men universe: a good egg. Ken has matured and keeps his lusts in check. He doesn’t openly thirst for recognition the way the others do, and is pleasantly surprised when it comes his way. While Pete was always eager to credit “golden boy” Cosgrove’s annoying success and superiority to his looks, Ken’s continued knack for short stories proves that he is talented in non-superficial ways. He now writes unpretentious genre fiction, which his publishing-world wife encourages, and he doesn’t seem to think Galaxy is a step down from The Atlantic Monthly. Let’s be real: That robot story sounded good! Peggy doesn’t seem like the kind of person who is capable of lying about a personal critical opinion of art, even to a good-looking, “pact”-sharing buddy like Ken. Ken shrugs off compliments with believable modesty and doesn’t quite comprehend why he has simultaneous competing desires to keep his writing private and to share it with everyone in the world. The solution is to invent multiple pseudonyms, to draw the curtains so that the different secret parts of him might punch it out. When a jealous Roger fells his plans to publish a sci-fi collection, Ken just comes up with a new name and skips genres again. He is adaptable and somewhat self-contained. He knows that no matter how many accounts he slam-dunks, it won’t satisfy him like writing does. He writes for validation, but mostly because he just can’t stop. It’s how he makes sense of the world and his experiences in it.

Former sinners ride the highest horses when it comes to doling out advice. Roger tells Ken that ideally the job he has should fulfill all his needs, but when has Roger ever been one for monogamy? Don chastises Pete for cheating on Trudy with a leopard-print-clad prostitute, but when has Don ever given a shit who anyone screwed, including himself? All of a sudden he’s a changed man, sympathetic to cuckolded wives and contemptuous of businessmen paying for sex, just because Trudy flirt-shamed him into coming to one Cos Cob dinner party. Don’s advice to Pete rings hollow because it is dispensed by a chronic hypocrite. Getting everything you want, it seems, leads to a feeling of emptiness for some (Pete) and a sense of ageless invincibility for others (Don). Don is so smug about his newfound morality and satisfying intimate relationship that he turns down a blow job on the SCDP tab to talk shop about the whorehouse trade with a buttercup chiffon-wearing madame resembling Adele. He also misunderstands Megan completely in thinking that telling her “Let’s make a baby” will get her hot. What gets Don hot is Megan making fun of him for saying he wants to make a baby, and what actually gets Megan embarrassingly hot is watching Don fix things with his hands.

Somehow when Pete was coveting Don’s life he managed not to notice that Don was utterly miserable in the suburbs. Nor does he believe that Don won’t grow tired of mod bumblebee dresses and verbally abusive floor sex with Megan. Pete doesn’t have a real friend in the world. All he has are work friends and a wife he increasingly resents for observing so many flashes of his pettiest real self. Pete could have been part of Peggy and Ken’s friendship pact had he not been so weird and jealous and cruel to them both. They could have all gone to Vermont for a Jules and Jim weekend. This episode was full of Mad Men fan fantasy pairings; Peggy and Ken, Don and Trudy, Joan and Lane. If the Campbell house dinner had been just a few years later, it could have turned into a key party. The potential was definitely there, even if Pete doesn’t have the best ear for mood-setting slow jams. When Joan told Lane that they’d all thought about doing it, she meant punching Pete in the face, but at first I thought she meant “having sex with each other.” She didn’t let Lane go through with it, but she understood where the urge came from and didn’t judge him for trying it. Joan is familiar with the way men act when hopped up on testosterone and victory. Close quarters and politely false social fronts provoke questions about what acquaintances are really like off the clock and under the covers.

Pete’s colossal sense of entitlement seems to stem from his wealthy upbringing, but it’s hard not to pity him anyway. He wants so badly to be charming, loved, and taken seriously, but he closes too soon and too hard. Instead of becoming a man, he has just grown up into a giant child. He shares the latter tendency with Roger, which is why they are both prone to throwing tantrums, each one promising to hold their breath for longer. Far from turning him into an alpha male, climbing the ranks at Sterling Cooper has only reinforced his feelings of powerlessness and sadness. He’s the new Duck Phillips. He feels trapped at home, even though he made all the decisions that led to him being there. He seeks fatherly approval from Don during Taxicab Confessions time, but then feels condescended to when treated like a son rather a peer. He can’t fix his own sink, can’t pick up pretty young girls, can’t even beat up Lane (although he can call him “Mr. Toad”), and nobody steps in to help him out because they’d all like to see him hurt. All he can do is pay hookers to treat him the way he feels he deserves, and even that can’t save him from the way he feels watching “Handsome” finger his driver’s ed crush. When he finally gets to laugh with the boys at Lane’s horror about the hooker getting bubble gum on Jaguar’s “pubis,” he can’t help but take it too far and call Lane “a homo.” Lane and Pete were hell-bent on proving that of the two least athletic guys at Sterling Cooper (who aren’t Bert), they are the more athletic one. I know Roger had Lane for the win, but I kinda had Pete! That guy always seemed like the type to do something crazy in a fight like snatch out your eyeball and step on it.

Brolin Does Brolin Things and 'The Californians' Kills on SNL