Brolin Does Brolin Things and ‘The Californians’ Kills on SNL 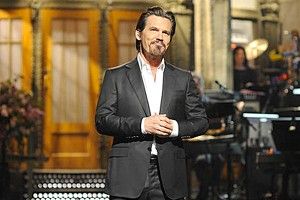 So. You’ve got Josh Brolin for the week. Josh Brolin, who — goatee or no goatee — can pass for most U.S. presidents, a young Most Interesting Man in the World, Satan, Tommy Lee Jones, anybody on Mad Men (including Megan), characters not yet introduced, and even a handsome human version of a pit bull. He’s at your disposal. And yet your only guests on Weekend Update are Garth and Kat? Why was that? Did Josh Brolin eat all of the bagels at craft services except for the whole wheat ones? Were you somehow offended by the way he ran majestically through the slow-motion hallway, dripping viscous, slow-crawling sauce from one beaker to another, so offended that you also kept it offline so I couldn’t embed it here? Do you remain suspicious about his legal troubles? Or is it — as I have long suspected — that the Garth and Kat sketches belong under the complicated striped umbrella of Comedy Mind Control, and that they appear on SNL whenever the government wants to send us subliminal messages in the form of improvised (wink wink, government) horrible songs with lyrics like “when I look out my window I see a birdbath,” lyrics that don’t make you laugh but that make you listen carefully (and then resent having spent your attention on them)? I don’t understand. I know that last weekend’s musical celebration of spring was likely the unmelodic swan song of Garth and Kat, but I don’t care. Josh Brolin was just sitting there!

But none of that matters now. Of course more Brolin would have been great, but you don’t bite the hand that feeds you doughnut soft-serve cones like “The Californians.” Not only was “The Californians” my favorite Saturday Night Live offering in a while, it sparked a boring/fascinating/crazy/beautiful Jezebel comment chain during which people agreed that Los Angelenos have an obnoxious fascination with travel routes and freeways, while discussing their own regional travel routes and freeways, and then out-obnoxiousing Los Angelenos by driving their little Mini commenter Coopers down dark cul-de-sacs of interstate semantics (“the 5” versus “I-5”) and whether or not it’s acceptable to say “hella” anywhere. “The Californians,” which we can only wish actually appeared on SOAPNet (I’d even take a derivative!). I wanted it to be based on something real, something I could revisit and touch and wrap myself in like a cashmere throw left out on the arid Laurel Canyon porch swing — the mirrors, the sun-dried tomatoes, the affairs and the Santa Barbara Pinot Grigio — it was like a Twilight Zone spec script directed by David Lynch and filmed in 30 minutes. The vowel-y accents that were some kind of Scottish and Venice boardwalk patois, the tufty blond hair shooting erratically out of every scalp, the sharp diss to “get back on San Vicente, take it over to the 10, then switch over to the 405 north and let it dump you out onto Mulholland where you belong!” — there’s something to it, particularly when you live in a city that a lot of people regard as a horrible, barren planet where dreams go to die and every cloud is made up of the ghosts emanating from Joan Didion’s depressed cigarette. Of course, it doesn’t seem like such a strange place to those of us who live here — well, most of the time — because we’re so drunk on the fine cheap wine we buy at uncrowded Trader Joe’s or the Corona Light that pours out of our kitchen faucets. Plus, that sounded like a plausible shortcut to Marina del Rey.

With “The Californians” and “Slow Motion Hallway,” SNL had already put in a solid show, so I didn’t even mind another installment of “Laser Cats.” (This one was an homage to Steven Spielberg, who made a cameo in a Laser Cats fan outfit.) Or the uncomfortable Piers Morgan segment (I love Nasim Pedrad so much, maybe more so because she got saddled with the weighty and horrible line, “I also know what it’s like to have a black man in me”) and two good attempts at lassoing Jay Pharoah’s talents (“Principal Frye Prom” and “America’s Next Top Empire State of Mind Parody Artist”) that didn’t quite take off. Brolin’s brief opening monologue, as well as his boozy, student-dating teacher in “Principal Frye,” didn’t seem particularly tailored to him, though he brought some good eyebrow work to a blond Keanu-like doctor in “The Californians” and the scientist in “Slow Motion Hallway.” Two digital shorts took the episode from 2 percent Brolin down to skim, or even vanilla soy Brolin. I like the full fat.

Gotye, however, not only performed the inescapable earworm “Somebody That I Used to Know” on the SNL stage, but referenced it in the second digital short of the evening (because you can’t get enough! Of that magical song!). Maybe this is a government conspiracy, too — maybe the tune carries an HPV vaccine like Lil’ Poundcake; otherwise, why would it have insinuated itself into your nighttime programming this week roughly 600 billion times? So many mysteries, like when you’re taking Third or Beverly at 1:30 on a Tuesday and you have to pull some craziness like taking Kings up to Santa Monica and it’s way quicker, but why would that be, at 1:30 on a Tuesday? Only Lorne Michaels knows.

Next week: Perhaps before its time, the Lana Del Rey episode reruns.