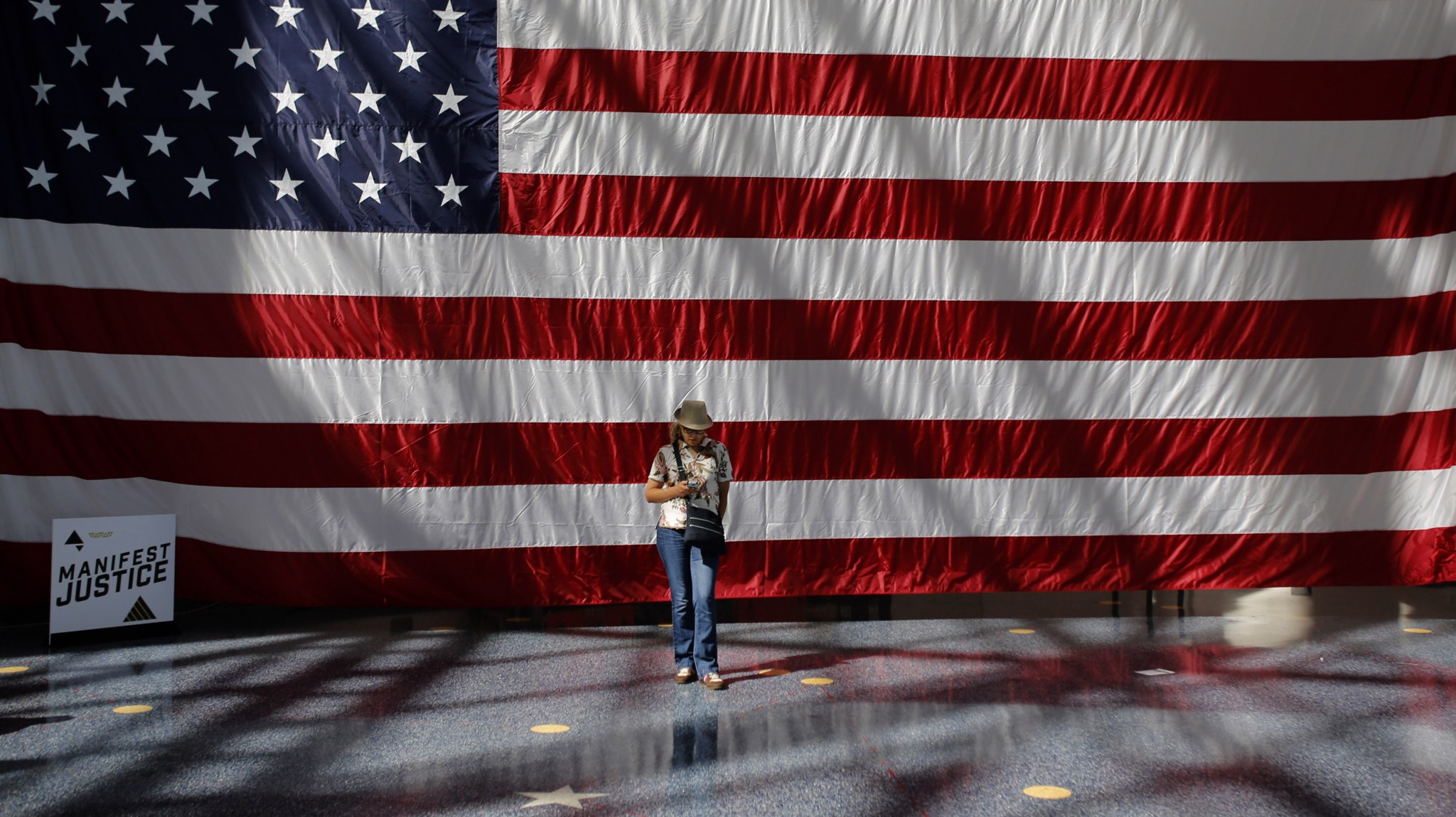 Earlier this month I attended a two-day event at the Los Angeles Convention Center called Politicon, a word intentionally created to conjure the image of a Comic-Con for political junkies. When you think about it, the idea makes sense. The world of comics and the world of politics have a fair amount in common. Both are crowded with cranky outsider zealots full of passion for a fantasy version of reality, many of whom are obsessive collectors of arcane statistics and secretly seeking world domination.

The invited speakers spanned the considerable distance between Ann Coulter and Trevor Noah — a distance that seems to be growing ever smaller since former SNL cast member Gary Kroeger (1982-85) announced his bid for an Iowa congressional seat, with dreams of following in the footsteps of U.S. Senator Al Franken (1975-80, 1985-95).

In fact, I was there to judge a political stand-up comedy competition. Because we’re in the ramp-up to an election-year cycle (which in our present culture has become as omnipresent as our 90-day Christmas), I was already holding my breath that this would not mean I was in for a long afternoon full of “John Boehner is orange!” and “Donald Trump’s hair is craaazy!” jokes.

I’ve never been to a Comic-Con, though I’ve certainly seen as many videos of aisles full of vendors and multiple Darth Vaders as anyone needs to see in one lifetime. So when I noticed that the publicity material for Politicon was encouraging people to come in costume, visions of teenagers dressed as Bernie Sanders and Carly Fiorina began dancing arrhythmically in my head. Unfortunately it was instantly apparent that the dominant costume of choice for Politicon was “pudgy white registered voter.” I did see five guys in powdered wigs riding an escalator, but they turned out to be part of some kind of a comedy troupe. Hopefully that guy in the star-spangled suit behind them also had an excuse. 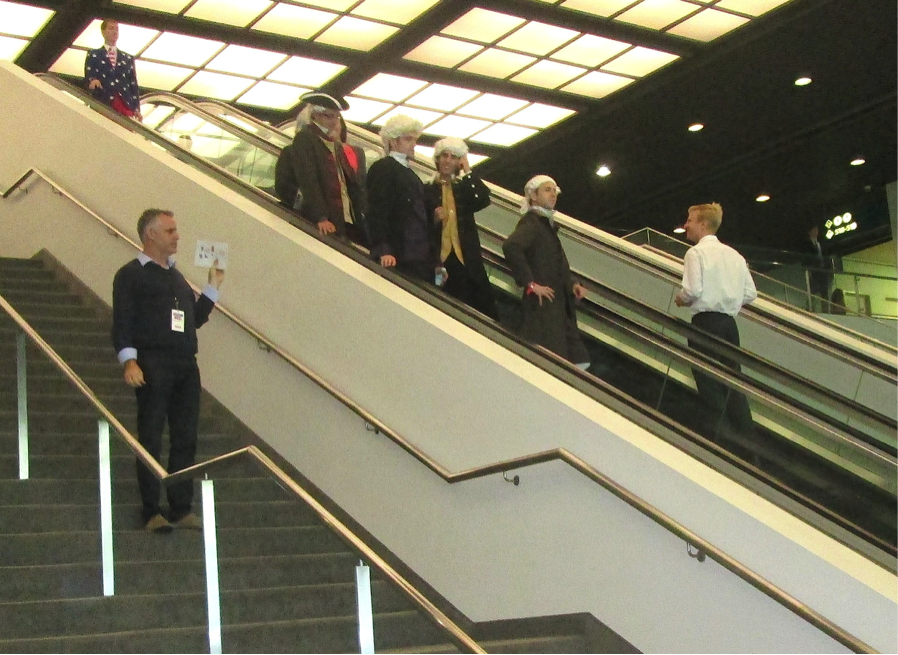 But hands down, the best cosplay was on view in the first conference room I entered, where a heavyset man holding forth to about 60 people was dressed exactly like former presidential candidate and speaker of the House Newt Gingrich. His presentation, which looked correct, down to the littlest details, even included a massive reservoir of predictable verbal clichés like, “Liberty comes with a price tag,” “We have to continue to support our troops,” and, “As long as you’re passionate about this country, I believe we have a very good future.” 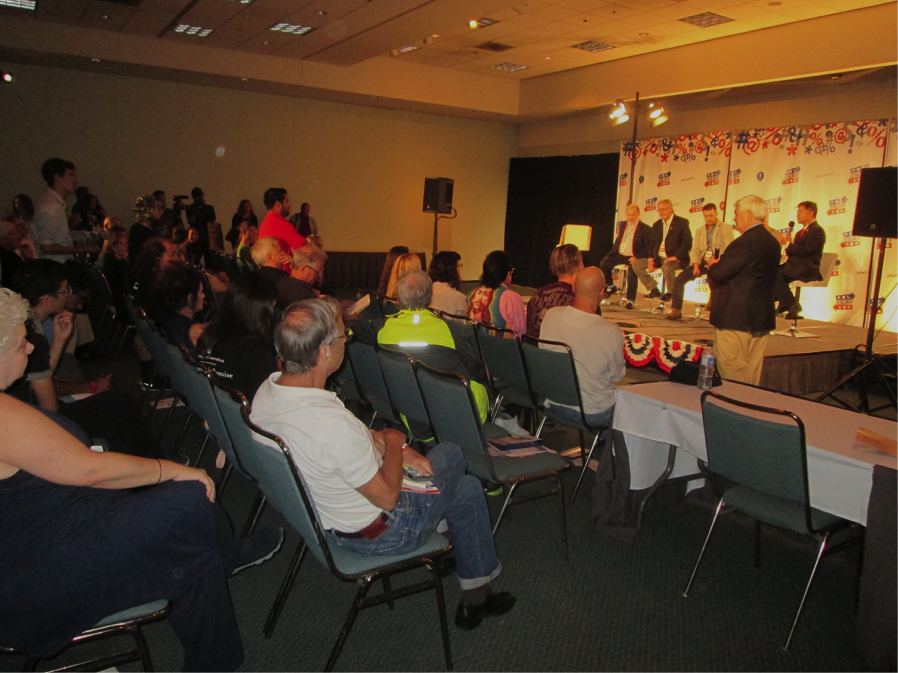 I was awestruck until I learned that it actually was Newt Gingrich.

Still, I was glad to have been on hand to see him speak directly to the Midnight Rambler. Yeah, the one who closed the kitchen door. 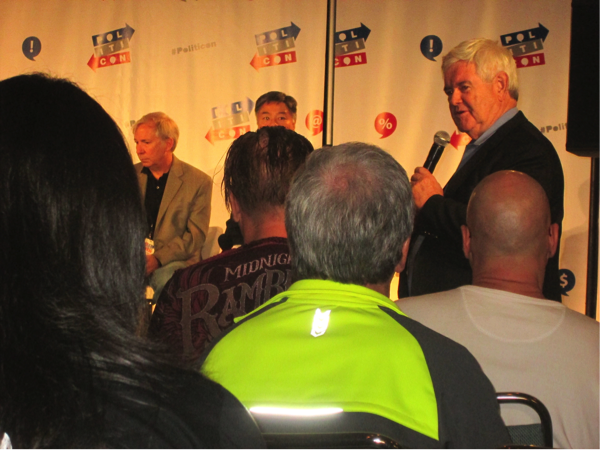 With several hours still to kill before my event was slated to start, I paid a visit to “Democracy Village” — secretly hoping its citizens would be friendly and offer refreshments. 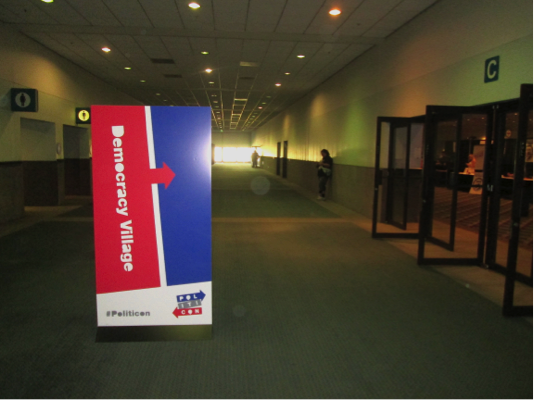 In many ways, Democracy Village was a paradigm of our ailing democracy at large.

Upon entering, the first thing I saw was this large custom-made game called “the Road to D.C.” And as in real life, most of the villagers were ignoring it, with only the youngest citizens showing any interest at all in playing. 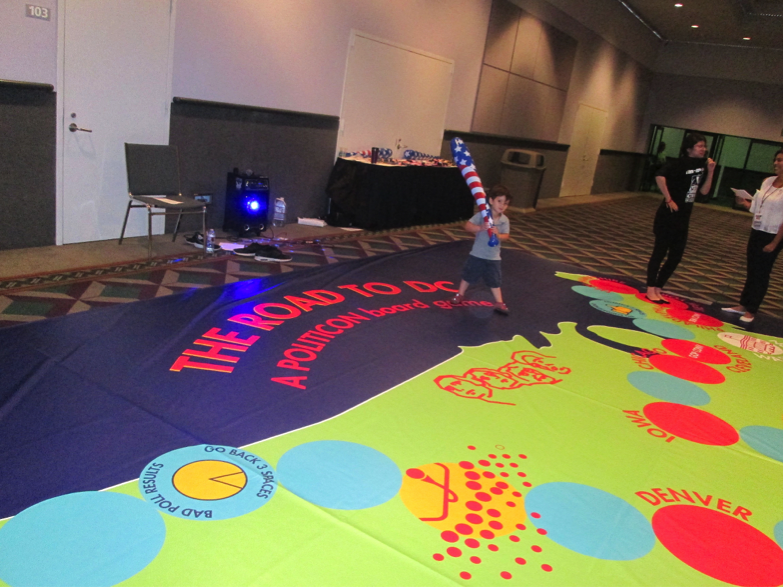 Nearby, a Facebook booth loomed like a glowing obsidian void designed specifically to remind the villagers that it remains an omniscient presence, ever watchful, but with whom no human contact can be made. 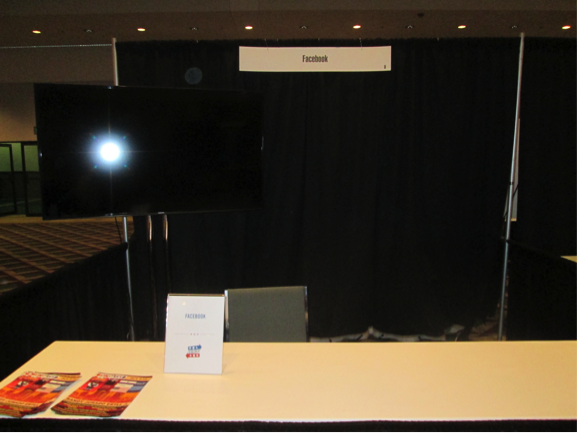 A short distance away, Sean Parker, onetime president of Facebook and poster boy for personal freedom, had his own booth to promote his newest project: Brigade, an app in which he invested $9 million to help screen-addicted young people find a way to compare their political profiles with those of their friends. 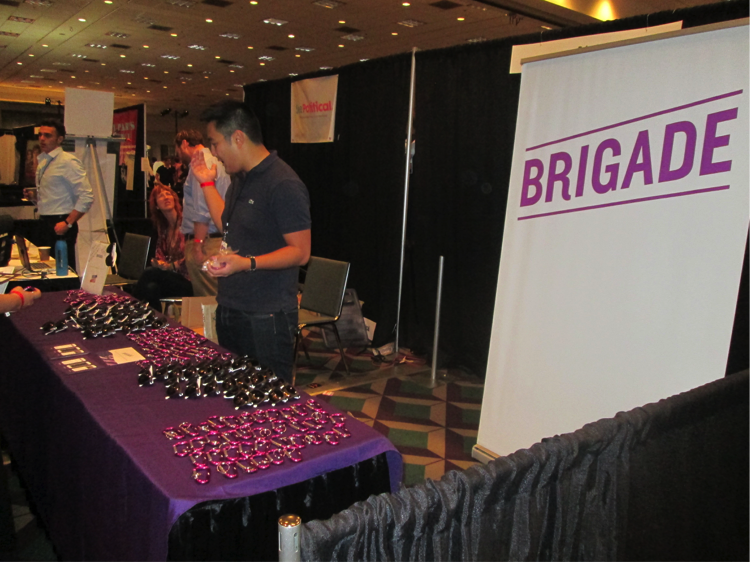 Visitors were invited to help themselves to a pair of inexpensive plastic sunglasses that reminded me of a pair I once bought for a whining 7-year-old boy during a stop at a gas station. This left me wondering if items commonly sold by the cash register at gas stations, such as air fresheners and whimsical lighters, might now be the newest form of hipster irony for people under 40 who are worth $2.5 billion.

The Young Democrats were in residence, but they were feeling smug and playing it pretty low-key. 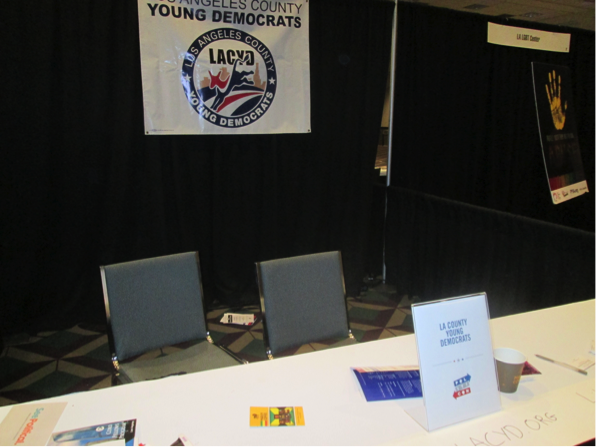 One booth over, I stopped to see what I could learn from a large chart that claimed to show what is happening to Californians under the age of 25. 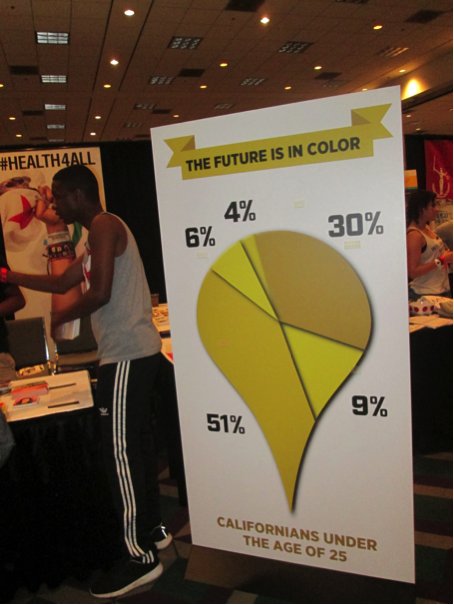 Though the headline seemed sound, I really did not expect the color wheel of the future to have been reduced down to only those colors seen on charts showing the changes in urine that result from severe dehydration. Apparently the California drought is really taking its toll on the young. 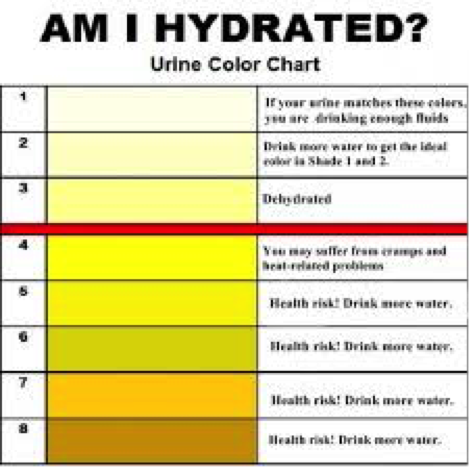 This served as a poignant reminder that there were no refreshments being served in Democracy Village. Oh sure, there was this, but I am one who prefers that my cotton candy be free range. 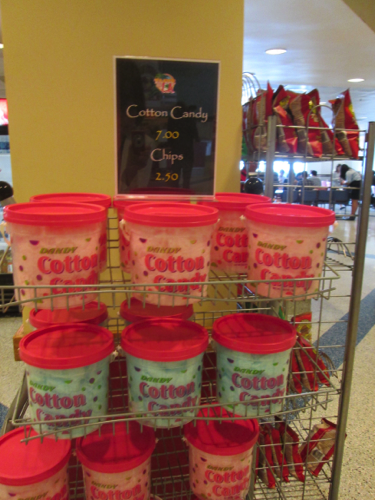 Sadly, the role of women in the village seemed to be stuck at the status quo, with some still seeking empowerment by taking off their clothes … even though fewer and fewer of the people who really matter seem to be paying any attention at all. 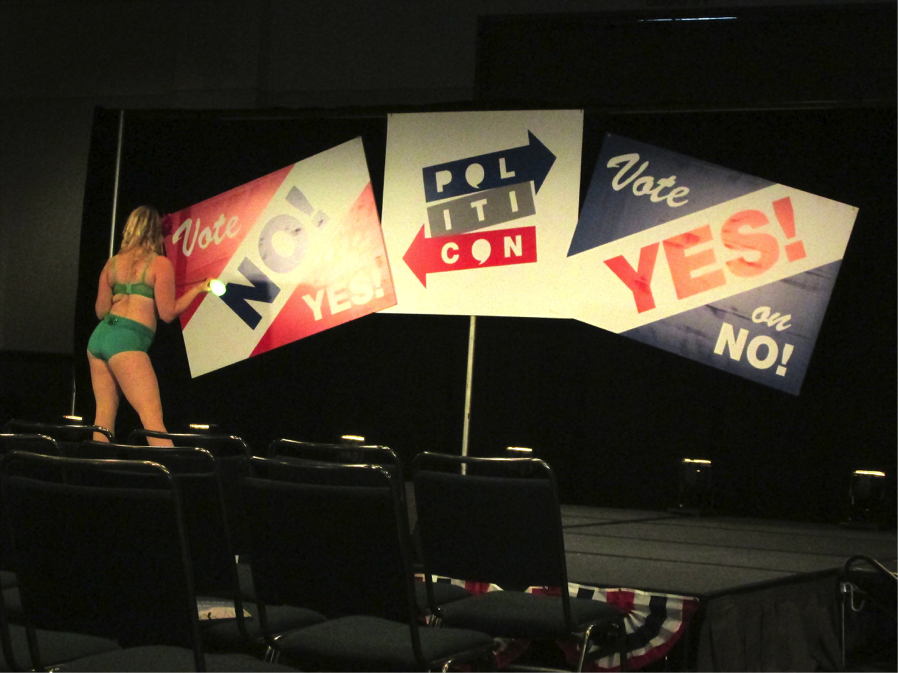 Yet there were also signs of hope. This theoretically amusing display was being ignored, which indicated an educated electorate. 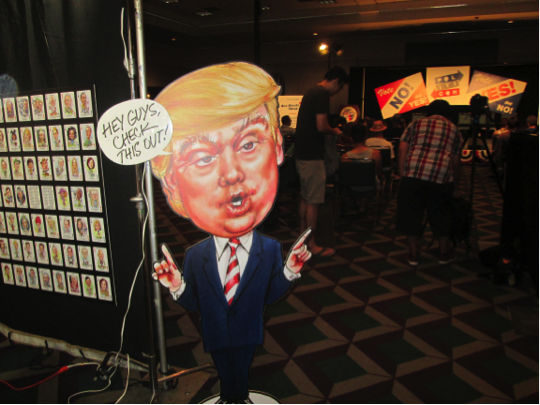 And most hopeful of all was this booth: Further evidence that after the apocalypse, we will figure out a way to live in harmony with our new insect overlords. 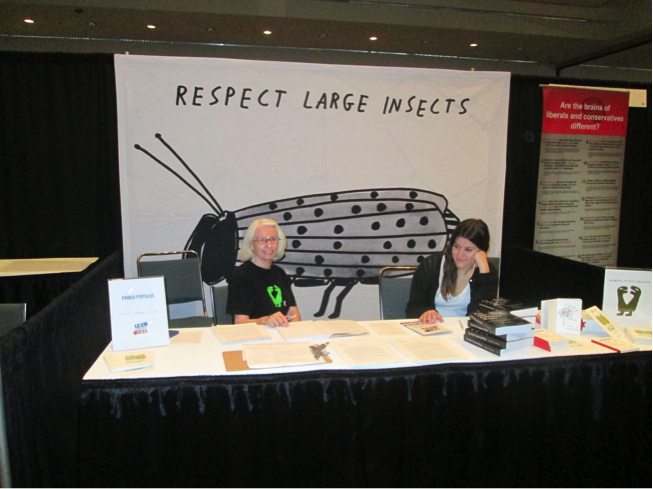 Finally, it was 4 p.m. and time for me to judge the political comedy competition. I took a seat at a narrow table beside my fellow judges: three women and two men, all associated with the world of comedy, assembled to select a winner from a field of 10 finalists.

As in every assortment of stand-ups, a few were awful. But the funny ones represented a veritable melting pot of ethnicities, and that in itself offered a ray of hope.

There was Amir Talai, a hilarious Persian American comedian, who is sick of his white friends wanting him to be their window into Iran. “Come on, people,” he says, “I’m not Iranian. I’m American. I don’t read.”

There was Ramsey Badawi, the son of Palestinian refugees, who admitted to feeling bewildered about an endless war being fought for decades over “the only strip of land in the Middle East that doesn’t have oil.”

There was Brodie Reed, a black comedian with a loose, languid manner who has been feeling left out because he has had no negative run-ins with the police. 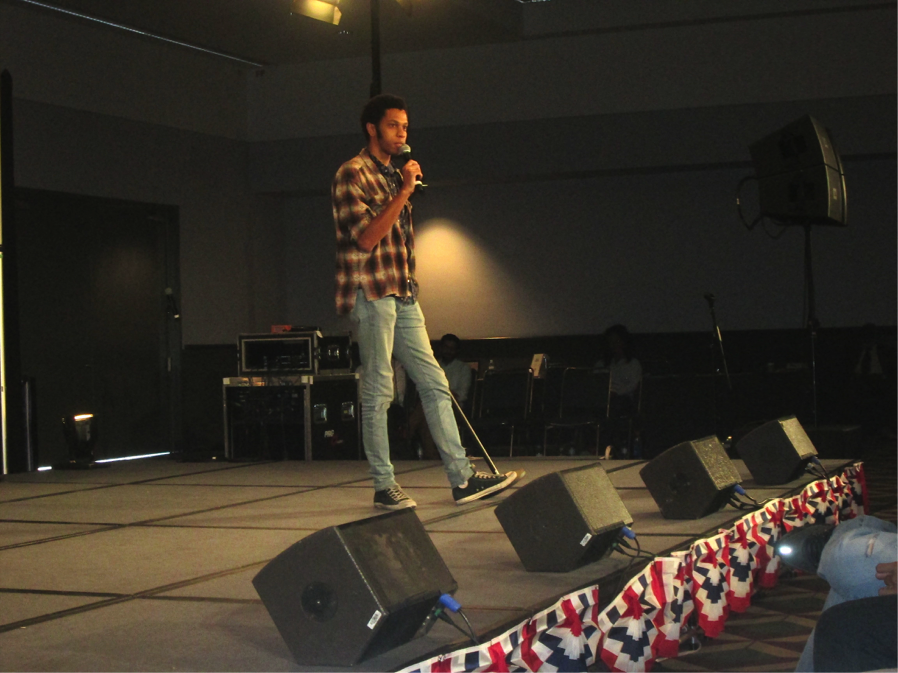 “I can’t help but think to myself, Why not me? What’s wrong with me? I’ve never committed a crime in my whole life. I deserve it. I’m at that age where even my white friends are getting brutalized by the authorities. And you know … I’m happy for them, but I’m thinking, It should have been me. Always a witness, never a victim.”

He earned one of four perfect scores that I awarded, because after a day spent perusing Politicon, I was so relieved to be back in the presence of funny people.

I also gave a perfect score to Tamer Kattan, a hilarious half-Egyptian, half-Jewish comedian who claims that people don’t know what to make of him because he looks “simultaneously dangerous and helpful.”

Ditto Toby Muresianu, a self-described “straight white male … a big fan of the system,” who really knows how to write great jokes.

And it was here, sitting in judgment of others, that I happily rediscovered that even in the face of our battered vision of democracy, comedians continue to serve a version of justice by finding a way to really frame things differently.

Still, I think a few of us were unprepared for the fact that when the votes were finally tallied, our diversity-prone panel of judges had selected a white male as our winner. 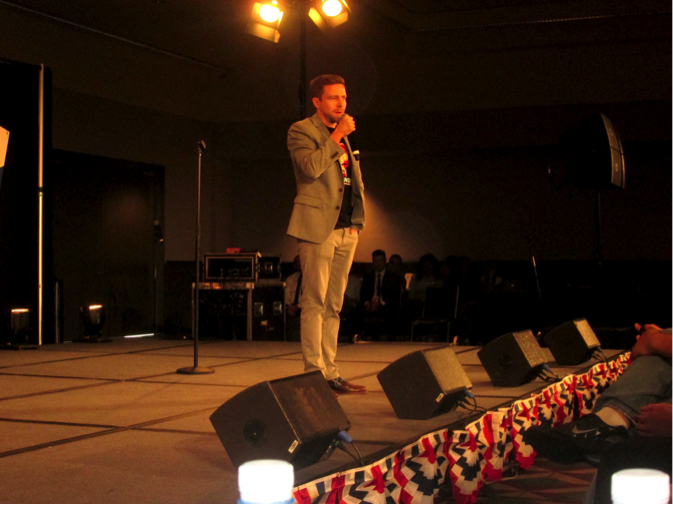 It all boiled down to math, and the truth was that Adam Yenser came by it honestly. We all thought he had great material. I particularly enjoyed his observation of a new American economy full of many new kinds of jobs. “One job,” he says. “Uber. We now have an economy which is based on everyone giving each other rides to the airport.”

Maybe Democracy Village actually was a form of the larger world in microcosm, proving that no matter how you add up the pieces, the white male still has the edge.

But it was definitely a close race. I had the feeling that if there had been endless rounds, like we seemingly now offer our presidential debaters, some of the others could have taken it.

So hooray for comedy, the democratic invention we use to shed some light on dark corners so we can all have enough space to continue playing along.