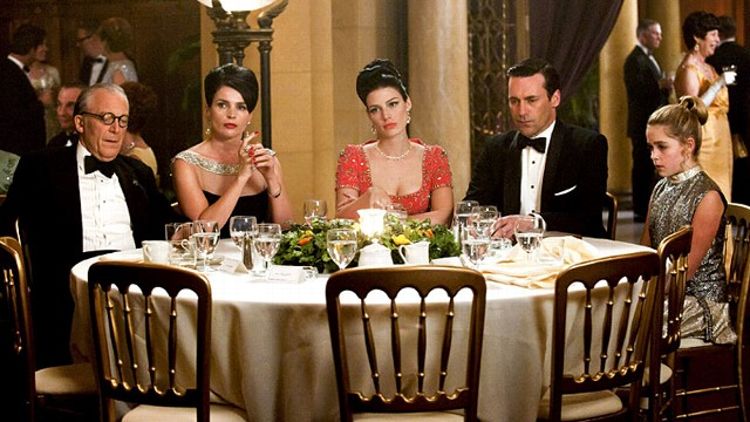 “Well I’ve heard your dirty stories about your last affair / And how you got in houses when you knew no one was there / If you want to find a lover gonna love till the end / Go on and find yourself a lover that can be your best friend” —The Lovin’ Spoonful, “Bes’ Friends”

Do you believe in magic, Glen Bishop? You’d better, because that’s what it will take for Sally to ever make out with you. Sally and Glen are still phone friends even though Glen is now in boarding school, where you just know he is top dog when it comes to hazing. JK, you know he gets dicks drawn on his face by the lacrosse team every night. It’s beginning to seem weird that Sally still has no friends besides Glen. You’re telling me a super-hot blonde girl with new white patent go-go boots and access to a cool mod apartment in New York City has no friends besides a weird overconfident kid she lived next to in the suburbs for a few years? Even if she made the phone cord into a trip wire for Henry’s mother and then got credit for saving her life, is a little bit of flattering attention really worth a long-distance phone relationship with Glen Bishop? He is not charming or cute and he has terrible game. Maybe Sally finds Glen’s lack of game sweet after seeing what the prize is for winning Roger Sterling’s.

Mona Sterling is even tanner than ex-husband Roger. Late-’60s Elizabeth Taylor glamor fits her like a spangled caftan. Roger and Mona are drinking in a high glass tower where rich people hide from insurgencies and socially progressive movements. Megan’s mom and dad are in town too, and boy are they French. Megan’s father is a Marxist professor and her mother is a long-suffering Julia Ormond. Don reads a Black Flag tattoo in bed (OK, an Ian Fleming James Bond book). Megan falsely assumes the ongoing sexual competition between herself and her mother is obvious. Don is both kind of a dimwit when it comes to picking up on emotional cues and is so used to women hitting on him and touching him in a flirty way that it doesn’t even faze him when his wife’s mom does it. Megan, in a chic Western blanket skirt, has no interest in being part of a pair like her parents, brutal sexual competitors operating within the battleground of a shared city. She doesn’t want to monitor her husband’s sexual fidelity or have to use her own to get revenge on him, yet she picked Don Draper knowing full well what type of guy he was before he met her.

Don thinks Megan wants to do him in his office, and seems disappointed when she just wants to pitch. She does want to do him in his office, just not until after she successfully completes the pitch. Megan’s spiel is not incredible, but it’s solid. At any rate Don knows his marriage is worth more than his critical judgment, and creative is currently playing around with “human cannonball,” so it’s not like they have much to lose by changing it. Megan’s classic Sterling-Cooper–style familial nostalgia-based pitch works better than any cutting-edge Ginsberg pop art statement ever could. It is baked beans, after all. You might not like baked beans and maybe you recognize that happy-looking families can be a sham, but we all yearn for something that people often grasp on psychedelic drugs, some nonexistent perfect childhood where you never get older or see your new grandma going down on your dad’s business partner after he got warmed up by flirting with you all night.

It looked like an indicator of forthcoming trauma when Abe peaced out after the creatives started making jokes about Peggy’s rack — the idea that Abe might dump Peggy didn’t come out of nowhere — but that turned out to be misdirection. Giving a stranger a hand job in a theater helped Peggy realize she genuinely wanted to be with Abe, and watching Peggy chat inappropriately with her male coworkers just made Abe want to be closer to Peggy during her off hours. Rather than jump to the conclusion that she is about to get bumped off by her leather-jacket-wearing Jewish heartthrob bf, she goes to seek council from grand priestess of womanliness Joan, and searches Joan’s face for some indicator that it’s OK to talk about boys. Joan — curious and less hostile to Peggy than she used to be — suggests that Abe might actually even propose. Peggy has an incredible look of awe and horror when she finds out that Joan has been dumped (even worse, dumped via the terrible fade-out technique). Joan says she’s “just like everybody else” but she was clearly excited that Peggy took her whole invulnerable ginger sex goddess routine at face value.

Roger thinks the award ceremony will be like being “lowered in a bucket into a gold mine” — but the more he talks the more it sounds like he is lowering them into the Erowid Psychoactive Vaults. When I saw Peggy walk in the restaurant in that horrible pink dress I thought for sure she was gonna get whacked. But Abe looks at Peggy with love and asks her if she wants to move in together so that they can hang out more. His fantasies about their future wonderful mundane life of grocery shopping and writing together are, indeed, more romantic than Joan’s entire marriage to Greg Harris. In the executive dining room of the Time Life Building, Don and Megan grift Heinz. Noted science-fiction writer Ken Cosgrove fluffs the clients between drinks and passes to Don for an alley-oop while he paints the scene. Megan masterfully tops from the bottom, paving a way into Don’s beans speech and then demurely beaming at him by his side. Suddenly the Don Draper show is a double act. Dinner becomes triumphant. Champagne is popped and fizzes all over the boundaries between Don and Megan’s sex and work lives. Boundaries, like cubicles, are mostly symbolic. They tend to inspire more transgression than they prevent.

Joan doesn’t even laugh at Peg’s little Huck Finn hat when she congratulates her on “shacking up” with Abe. She looks like fellow benevolent voluptuous goddess RuPaul when she hugs Peggy. Condragulations, Peggy Olson! You are now a woman, even though all I want to do is brush your hair out and flat-iron it. Peggy sounds a bit like Don used to when she compliments Megan on Heinz. She can’t just say good job without making it be about herself a little bit. It’s ambiguous whether Megan is excited about having pitched successfully at all, or upset that she let Don have the moment that could have been hers. Alternately, she is just freaked out because her parents are still in town and it’s making her crazy. She might be feeling a mixture of all three. Sally calls Don “Papa,” which is what Hannah Horvath calls her dad when she’s on opium. It’s the kind of thing you might think to do before you ask for something. Sally wants to be a grown-up because she doesn’t know any better. She might want to wear makeup and show off her legs, and she likes flirting with Roger (who doesn’t?), but she hadn’t yet made the connection between doing those things and the thing she sees Mrs. Calvet do.

Couples often share a code: Sally uses her mean secret name for her grandma with Glen, Abe and Peggy are equally awkward, Don and Megan both speak fluent con artist, and Dr. and Mrs. Calvet use French to disguise their loud quarrels over his rampant infidelity. We can’t tell if Dr. Calvet’s penchant for seducing grad students is how he got Mrs. Calvet in the first place, although given their daughter’s preference for a much older man it’s not entirely out of the question. If you thought Megan was tempestuous, hitching rides and spitting up the sherbet last week, wait until you meet her mère Marie. First she almost sets the Draper place on fire, then she burns Sally’s mental world down. Pete playing croupier to Dr. Calvet’s massive ego was a nice little baller moment for Pete. Maybe he was just having a really bad week last time! It happens to everybody! Everyone seemed like their old selves this episode, like the show was being nostalgic for itself, and I was right there with it eating space spaghetti out of futuristic bowls.

It’s pretty hard to fake coolness when your mom is standing nearby. Peggy’s mom and Joan’s mom should hang out and play bridge while they think of new ways to better attack their daughters’ self-esteems. As daughters Peggy, Sally, Megan, and Joan can never do enough to please their parents and partners. Sally presumably doesn’t even know yet that Don was unfaithful to Betty. Megan fears repeating her mother’s mistakes, replacing decades of making spaghetti dinners with decades of clandestine oral assez vite. (Megan’s father sure has a lot of opinions on what’s “bad for the soul” for a guy who cheats on his hot wife with younger girls.) Peggy rejects her own mother’s cruel advice in favor of omni-maternal Joan’s more optimistic and reasonable suggestions. Peggy tries to be a nurturing mentor to Megan but comes off more like a father patting his son on the back and saying “good game.” Megan feels humiliated that Don has seen the cracks in her intellectual French-Canadian upbringing, but Don loves screwed-up families that aren’t his own. Young people affect jadedness, not realizing what a nightmare it is to be old and jaded. Sally opens the door fully wanting to know what’s behind it. She expects to learn something important and adult but is nonetheless surprised to see Roger getting exquisite French head on a piano bench.

A rejuvenated Roger seemingly was in fact made for these times. Nobody understands “do whatever you feel like doing” better than Roger, who we now know may have been an aspiring baseball player in addition to being an amateur boxer. Roger’s psychedelic revelation appears to have been that he is superb at seducing women his own age. He may even like it better, because they can pace him in banter and foreplay. Leland Palmer delivers a harsh pour of reality to Don. The fancy clients are never coming in. They will smile to Don’s face, but they no longer trust him after the Lucky Strike stunt. He may have won some respect from the kids, but they are anticonsumerist anyway. Don has buried SCDP in a smoke-free coffin. Sally thinks New York City is dirty, and she sounds like Travis Bickle saying it.

Megan’s father is correct about the malevolent desires SCDP manufactures for fantasy lives, but he’s living proof that sins of the flesh transcend money. Fetishizing newness means you’re doomed to never be satisfied. Nice tuxes, fancy restaurants, new dresses; they all become outdated. Abe loves Peggy the way she is, and no material item in the world can compete with that. Unless someone invents a robot that loves you the way you are (or as Peggy’s mom suggests, a cat). The love robot of the future makes you baked spaghetti beans and serves it to you picnic style at the piano. Some things never change.