Lorde’s Pure Heroine Is a Pop Music Fountain of Youth 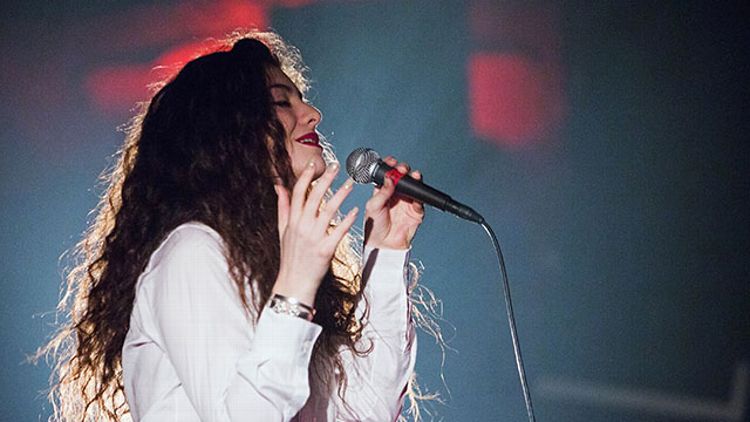 Pure Heroine, the debut album released today by New Zealand singer-songwriter Lorde, opens with “Tennis Court,” a track previously released as a single earlier this summer. The song, a murkily winsome, ever-so-slightly chopped ballad, ruminates rather transparently on Ella Yelich-O’Connor’s rise to fame over the past year. “Pretty soon I’ll be getting on my first plane,” O’Connor sings, a reference to her first trip to do press in the States, where her single “Royals” was quickly making its way up our charts. It could easily have been a wistful document of a one-hit wonder getting a taste of the big time before returning to her hometown with her tail between her legs, but if you’ve seen any of the terrifyingly self-assured interviews she’s given in the past few months, you know she released that song with the full confidence of a future superstar. And that confidence was warranted: It just so happens that Pure Heroine, as its title cheekily implies, is wall-to-wall pop pleasure and very possibly the best album of the year, validating for those of us who have been banking on her success, and incredibly inviting for those who are just hearing of her for the first time.

If you’re trying to sell your friends on Lorde, the elevator pitch invariably includes that she is somehow only 16 years old, and maybe makes a reference to her awesome hair. Some writers (myself included) have compared her to Lana Del Rey, but that’s more due to a sonic similarity than anything else; O’Connor has mentioned Del Rey as an influence, but her lyrical content stands almost in direct opposition. If you’ve heard one Lorde song, it was probably “Royals,” a starkly exuberant, finger-snappy rebuttal to the nihilistically opulent tastes curated by Del Rey and virtually all the other pop and hip-hop stars currently Billboard neighbors with her. But unlike Jessie J’s similarly themed “Price Tag,” there’s no self-righteous finger-wagging in “Royals,” just a casual shrug and a “not for me.”

That hasn’t stopped the narrative around Lorde from focusing on her outsider status, painting her as the underdressed underclassman storming the prom and ruining everyone’s hair. Last month O’Connor turned down an invitation from Katy Perry to open for her on her upcoming Prism tour, which made perfect sense for her career — she craves a different kind of buzz, after all — but still looked like a hostile slight in the rigid hierarchy of pop music, a stubborn refusal to kiss the ring. The album-release schedule over the next couple months is a very crowded scene, and Lorde has been bumping elbows left and right, calling out Selena Gomez for her unfeminist lyrics and Taylor Swift for selling an unrealistic physical image. (She and Miley are cool, though.) She’s scrappy and uncynical in a way you can be only when you’re still young enough to envision an industry where you can have the freedom to be yourself.

Lorde’s EP The Love Club, on which “Royals” was originally released last November, played kind of like the lost footnotes of the Gossip Girl show bible. Songs with titles like “Bravado” and “Million Dollar Bills” documented petty high school dramas and childish ambition. It was bittersweet and (with the exception of the moody “Biting Down”) feather-light. O’Connor wrote most of the songs on the EP when she was 15, and when Pure Heroine comes out of the gate sounding like the work of an artist at least 10 years older and more world-weary, all it does is remind you how much goes by in a year when you’re her age. She sings about how she’s “kind of older than [she] was when [she] reveled without a care” on “Team,” which is borderline trolling to anyone over the age of 20, but completely sympathetic if you have even the slightest whiff of a memory of what it was like to be that age.

In a culture with a general fixation on youth, advocating for the artistic point of view of a child can feel like rooting for the defending champion, but spending time in Lorde’s emotional sphere is far from an exercise in regression. I’ve always been a reluctant apologist for the British teen series Skins, albeit more in principle than in execution: It was a show about kids in their last two years of high school, written by a staff of kids either that same age or slightly older. After those two (debaucherous, drug-fueled, frequently sexually explicit) years are over, a new cast is brought in, because Skins was less about its individual characters than it was about the idea of being 17 and 18, and how magical and invincible you feel at that age. The young, untrained staff of writers were a primary source of insight into that feeling, but they also sometimes couldn’t quite see where the line was between youthful awesomeness and youthful idiocy. When they did, the show could be transcendently anarchic, but the rest of the time watching Skins felt like listening to the opening line of J-Kwon’s “Tipsy” on loop for six seasons, which was every bit as infuriating and entertaining as that sounds.

But through some dark magic, Lorde simultaneously has both the intimate knowledge of being a kid and the rational perspective of someone much older. She can sing breathlessly on “Ribs” about spilling drinks and listening to Broken Social Scene like she’s right there in her parents’ living room while they’re out of town, but her voice already misses that excitement, and Joel Little’s production filters it all through a haze of nostalgia and longing for something ultimately ephemeral. On “400 Lux” her voice is precariously and optimistic as she describes a courtship’s halting progress; “Buzzcut Season” is a tragic, gorgeous portrait of a codependent friendship. There is something universal in every one of these songs, no matter where you’re from or how old you are. And isn’t universality what pop music is supposed to be about, even more so than escapism?

I love listening to and thinking about mainstream pop, but most of the time I have to admit that I’m processing it as a sport rather than an art, praising the songs that scientifically work their way into my brain and artists who manage to stay in the headlines over everyone else. It’s a kind of pessimistic view to take, as if we don’t deserve to have music that can speak to both our heads and our hearts, and that Lorde is so convinced she can be strange and earnest and successful without following anyone’s template is encouraging. Don’t get me wrong, I’ll have Miley Cyrus’s Bangerz on heavy rotation throughout the rest of the year, but like Lorde, I’m kind of over being told to put my hands up in the air. And if we’re still pretending like we have to pick sides in the pop wars, then I’ll gladly admit that Lorde is my master now.