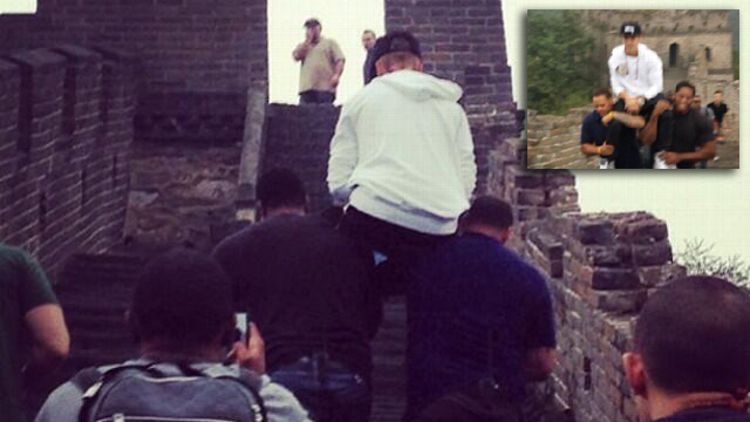 As far as pop stars humiliating their bodyguards in public goes, this has got a long way to go to reach “Rihanna, weed, a blunt, and a conveniently smooth head” levels. But, after a long and exciting string of erratic, pee-in-bucket-cuss-out–Bill Clinton-type bouts of behavior, Bieber seemed to have turned a corner. When Zach Galifianakis thanked Justin for being on Between Two Ferns right in the middle of his meltdown, it seemed evident that Bieber was not, in fact, still mid-meltdown. (By the Catch-22-like rules of celebrity meltdowns: As soon as you acknowledge a meltdown, it no longer exists.) But now, this. So: possible explanations?

A. Bieber wasn’t really making his bodyguards carry him on the Great Wall of China, but was merely choosing a particularly scenic location to pay silent homage to the brilliance of Chappelle-as-Diddy, a character known to be hoisted in the air by people in his employ from time to time. When he got done with that, Bieber paid homage to the brave ninjas all around the world by playing with his nunchakus on the street.

B. Bieber was tired. He was tired, OK? The Great Wall is super-long! And he’d walked/swagged through most of it! So he needed a tiny bit of help at the top! Is that so wrong? Just a tiny bit of help? Not that he likes to point it out or anything, but it’s because of him that these people have health insurance! Jeez, you guys.

Lorde's Pure Heroine Is a Pop Music Fountain of Youth