Lindsay Lohan Puts on Her Producer Hat for ‘Inconceivable’ 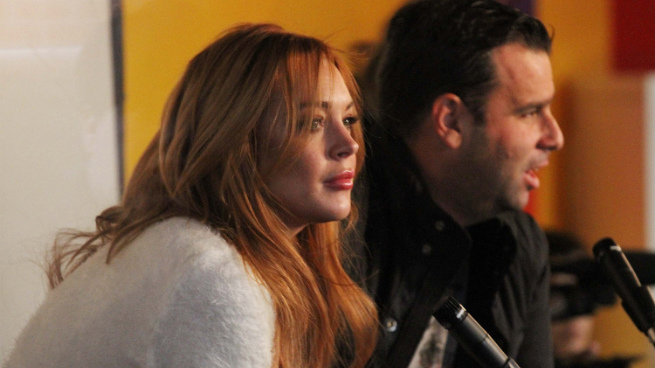 Lindsay Lohan: actress, singer, model, reality star, spokeshuman … producer? Lohan is at the Sundance Film Festival promoting a new project entitled Inconceivable, a “psychological thriller” that she will produce as a starring vehicle for a hot young star named Lindsay Lohan. Will it be better than The Canyons? Doubtful! As producer, Lohan gets dibs on selecting a director, which means it’s time for directors to hit the casting couch. Tables are turned, dogs! The actress who once told Oprah that she had tried cocaine “10 to 15 times” has somehow been insured for the movie, which is being produced by Emmett/Furla Films, which coproduced Lone Survivor and 2 Guns. Despite teaming up with Lohan, they are not the producers of Lone Survivor who were convicted for cocaine trafficking and became informants. Those were the other guys. How long until they make a movie about those guys, since movies about financial corruption and success and a shitload of drugs are in? Wahlberg can option it and they can all finance it together. Pain & Gain 2. Sold!

At Sundance, Lohan gave a press conference announcing the project and letting the world know that she’s taking her career by the horns. “Lohan would love to work with Jessica Lange and Juliette Lewis, but neither actress is involved with the project at the time.” I second that! As in, I would also like them all to work together. What do Lange and Lewis have in common? They play a lot of fierce, crazy bitches. That’s a good look for Lohan going forth. Who wants to be an ingenue anyway? She’s also threatening to get back in the studio and make some more tunes. Whatever gets you through the night! Here are some ideas for Lohan’s next project: a Sean Young biopic, a biopic about that crazy astronaut woman, a biopic about Lita Ford’s solo metal years. Let’s get real, you want Oscar material. And that’s why it’s got to be a Heidi Fleiss biopic! The role you were born to play! Call me, Lohan! I’m free and ready to consult on this idea. Let’s sell some Heidi Wear!