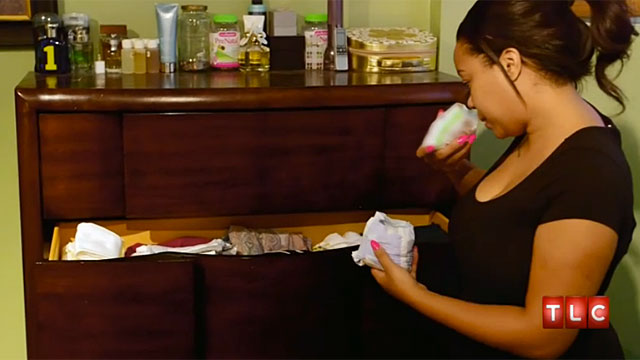 Who Is This Now? Keyshia.

Why Are We Watching Her? She’s telling us about her addiction to smelling and chewing on dirty diapers.

How Did She Get Here? Three years ago, a friend she was visiting changed her baby’s diaper. When the friend gave Keyshia the diaper to throw out, Keyshia actually kept it for a week, smelling it periodically over the course of each day. Since then, she’s collected more than 25,000 diapers. (And discarded most of them, I hope, though the episode does reveal that she keeps lots of them around the house and in the car.)

What’s the Grossest Thing We See? Well, we see Keyshia chewing on several urine-filled diapers, and by that I mean she puts the diapers in her mouth, works her teeth up and down, and comments on how great they taste. So: that.

What Have We Learned? Since being told in so many words that she must stop ingesting human waste not just for the sake of her own health but that of the baby she is currently pregnant with is not enough to stop Keyshia, probably nothing will.

Who Is This Now? Taylor Armstrong.

Why Are We Watching Her? She’s trying to explain what made her throw a complete hissy fit at the end of last week’s episode, because Dr. Jenn Berman doesn’t think she’s really that mad about the heat in her room or the pea-green towels in her bathroom.

How Did She Get Here? Since her last relationship was (a) abusive, and (b) ended when her husband Russell committed suicide after she filed for divorce, she has some baggage in her current one.

What’s the Grossest Thing We See? After Dr. Berman gives Taylor an opening by suggesting that her insane, entitled tantrum was masking her deep feelings about something else, Taylor races through it, sobbing that any time her current fiancé, John, gets upset about something, she worries that it presages a Russell-style reaction: “I already had reality TV kill one person in my life … Now my career is killing people around me again.”

What Have We Learned? Taylor Armstrong thinks that starring in reality shows is a “career.”

Who Is This Now? Aziza.

Why Are We Watching Her? She’s getting to know the people who might soon be her in-laws.

How Did She Get Here? She’s moved from Volgograd, Russia, to Cleveland on a 90-day fiancée visa while she and her intended, Mike, determine whether they’re suited to marry each other.

What’s the Grossest Thing We See? When Mike brings Aziza to his parents’ house, he thinks nothing of the fact that even though Aziza says she hasn’t eaten before she arrived, she won’t eat any of the food that Mike’s mother has prepared for the social event that is this communal meal. Mike tells us that Aziza doesn’t like people to see her eat, and even though it’s obvious how offended his mother is by Aziza’s failure even to take a token amount of food for appearances’ sake, Mike doesn’t do anything to ease the situation, while Aziza sits at the table behind an empty paper plate, texting.

What Have We Learned? Apparently, you can get away with a lot of crappy behavior by withholding sex: That way, your supposed fiancé won’t do anything to piss you off and delay the consummation of your relationship that he is less and less sure of with each passing sexless day.

Lindsay Lohan Puts on Her Producer Hat for 'Inconceivable'