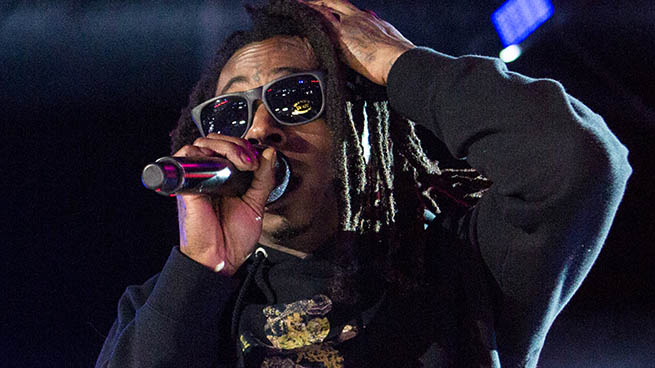 And yeah I’m a bear like black and white hair, so I’m polar
And they can’t get on my system cause my system is the solar
I am so far from the OHthers, I meant others
I just eat them for supper, get in my spaceship and hover

“Phone Home”? Tha Carter III, six years ago next month, platinum the week it came out, first time that had happened in three years, new classic, hardly a bad or boring moment, two beats by Kanye, Jay-then-hyphen-Z passing the torch in “Mr. Carter”? No? Remember this instead, then:

Lil Wayne was amazing! Just a few years ago, he really was. He was the most exciting and interesting megawatt musician alive, and he was on fire after three mind-boggling mixtapes. Then Tha Carter III gave way to a weak mixtape, a great mixtape, a gruesome rock record, a tepid, intensely Drake-laden album, and a decent mixtape. Then this happened:

Weezy F. Baby got bored (or stoned, or drained) enough to think he could just flick on the Auto-Tune, sing a John Mayer song, and call it good. From there he was rambling, annoying, and self-mythologizing more with every release, despite the hard reality that the worst part of his career was settling in. The rapper who did Tha Carter III and No Ceilings and even “6 Foot 7 Foot” was gone, and all the new guy was doing was talking about how great he was (mostly at sex instead of rapping, now) anyway. 2013’s I Am Not a Human Being II was a blip — intensely forgettable save for the Future-and-Drake-assisted “Love Me.”

And now we’ve got this new song, “Believe Me,” the lead single off Tha Carter V, allegedly (and almost definitely not really) Lil Wayne’s retirement album. And it’s realllllly good. Wayne’s been quietly working on a rebound in his past couple of verses, but this one track is all he needed to start erasing the concern/ill will he engendered in the last few years. For at least these six minutes, if not the entirety of the shadowy Carter V (which could be released anytime between tomorrow and Christmas 2015), Wayne is an electric, goofy, breathless, to-be-taken-seriously-as-hell rapper again.

From the jump, Drake’s doing that thing he’s always doing on Wayne tracks: building up his boss and staying mostly low-key, unlike his guest verses on literally everyone else’s stuff. Aubrey’s here to sing a boilerplate (but increasingly catchy) hook and to re-canonize Wayne’s greatness. That this is the first instance of Biggest Rapper in the World–era Drake rapping alongside Wayne on a Wayne track somehow encourages you to reconsider Wayne’s powers.

Then Weezy shows up after a suspenseful almost two minutes and zaps any considerations you were working on. He’s just going straight in, bar after bar after bar, spouting that maniac shit you won’t figure out till your dozenth listen. He doesn’t bother us with any gross-out sex-ed vignettes. He mulls matching Ferraris for himself and his daughter. He course-corrects the word sayonara to sayanOra. He drops a lot of aggressively random one-liners I won’t reprint because they’ll seem ridiculous typed out, but trust me, they’re great.

The whole thing  feels like a centerpiece from an imaginary Weezy/Drizzy Watch the Throne, crossed with a Godfather movie scored by Noah “40” Shebib. (The beat actually comes from Vinylz and Boi-1da, probably the dude most responsible for Drake’s whole vibe after 40.) It feels like it’ll be huge, like it’ll run things the way “Started From the Bottom” did, maybe. But more than anything, it feels like a reason to perhaps, possibly, cautiously get crazy-excited about Tha Carter V.