Lil Wayne, Human Being: The Latter-day Stumblings of the Former Greatest Rapper Alive 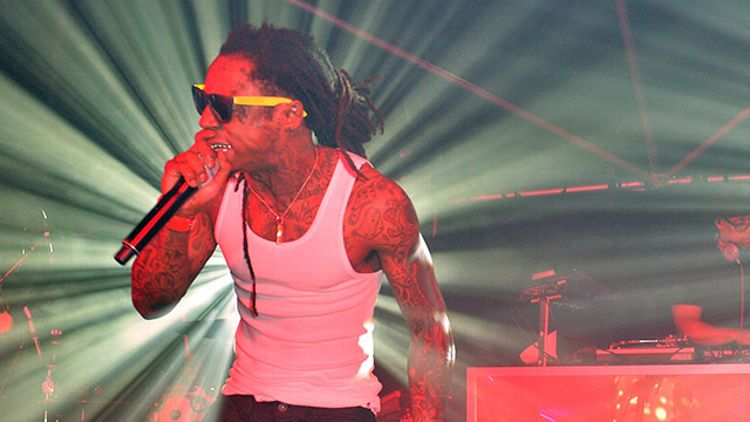 That night Wayne played the Beacon Theatre, his first solo show in New York City. He was just under a year away from the release of Tha Carter III, the album that would officially cement his improbable transformation from afterthought into megastar, and still cresting upward. His stuff-of-legend mixtape run — a roughly two-year span, between Tha Carter II and Tha Carter III, during which Wayne vomited out (what we thought was) an endless torrent of manic, tossed-off brilliance — had most recently produced Da Drought 3, a double disc of beautiful spazzing. On that mixtape’s best track, “Dough Is What I Got,” Wayne ripped the very breath out of Jay-Z’s undercooked comeback single, “Show Me What You Got.” “This is a public service announcement,” Wayne croaked over the iconic horns from Lafayette Afro Rock Band’s “Darkest Light.” “Lil Wayne, Weezy F. Baby issss … the best rapper alive.” And, at the peak of one breathless string, with one couplet, he proved it: “I have no brain, I’m retarded / we are not the same, I’m a Martian.”

After the show at the Beacon, police officers allegedly spotted Lil Wayne smoking marijuana on an Upper West Side street. They boarded his tour bus, found a .40 caliber pistol, and charged him with criminal possession of a weapon. On March 8, 2010, Wayne began serving a one-year sentence for that charge at Rikers Island. He’s never been the same.

This week, Lil Wayne released I Am Not a Human Being II, his 10th studio album. It finds him, more or less, rapping his ass off. I’m serious: I sincerely believe he’s trying as hard as ever. The difference, as it’s been since Rikers, is that he’s just not getting there.

“I’m in the crib butt naked, bitch,” he tells us, by way of kicking off the album. “She says my dick could be the next black President.” By the next track, we find out that he’s “caking like I’m Jewish / my n—- Drake, he Jewish.” Soon thereafter: “Cause girl it’s almost 12 and this dick wont suck itself” and “Bitches sweatin’ me like John Mayer / or warm air.” It’s worse because we hear him huffing to get back there, to that reckless place where he made mishmash out of syntax and linear thought. But the closest he comes — “How the fuck you gon’ talk shit to diarrhea” — wouldn’t have been let in the room on Da Drought 3.

A few weekends ago, we thought Lil Wayne was going to die. TMZ was reporting he was in an L.A. hospital, that he had suffered multiple seizures, that he was being given his last rites; we thought he was going to die. He didn’t, thank God. In his only response to the incident, a video clip released to TMZ a few days after he got out of the hospital, Wayne was oddly, disconcertingly flip about the whole thing, thanking people and grinning unconvincingly and promising that he was “more than good.” And then he did what could only technically be understood as plugging his record: “Also, my bum ass album still coming out March 26 … I Am Not a Human Being II. You gon’ get that shit if you want. If not, it’s whatever.”

On first view, I thought that was Wayne’s cockiness, peeking out in an ugly kind of way. Take into consideration that Tha Carter IV, his last studio album and his first post-prison comeback project, sold over 3.5 million copies. And that, if current estimates hold, IANAHBII will debut atop the Billboard 200. When it comes to market share, Wayne hasn’t slipped an inch.

But after a few more clicks on the TMZ clip, Wayne’s indifference started to sound genuine: Maybe this terrifying health scare had muffled his bluster and forced him to face facts. And the facts are that we’re now in the heart of the second transformation of Lil Wayne’s unlikely career, and it’s a very depressing stage. After the seizures, all that could’ve been chalked up as silly or dumb, bored, rich-dude indulgences — the piled-on fashion quirks, the cringe-inducing fascination with skateboarding — gave way to something starker and sadder. And that’s the most important thing here: Wayne can no longer rap.

What was always so fun about Lil Wayne’s circa-2006 ascendance was how unlikely it was. For years, Wayne was, undeniably, a joke: the little-kid court jester in Cash Money, which was already a thoroughly goofy (in a good way) crew. There were concrete reasons you could point to, to explain what was happening: Wayne was now a well-aged twentysomething, and branching out and finding inspiration beyond the Mannie Fresh beats he’d feasted on since grade school. But the transformation still felt, primarily, enigmatic and inexplicable.

I remember at the time reading Tom Breihan at the Village Voice, as he beat the drum, almost incredulously: “Lil Wayne started out … as a 16-year-old kid who talked about dealing drugs … but who didn’t cuss because his mother might get upset. These days, he’s an unpredictable master of … stunningly bizarre word-choices. Last year, he made a lot of people very, very confused when, at the end of his single ‘Bring It Back,’ he made a clear reference to Jay-Z by repeating the line ‘best rapper alive / since the best rapper retired.’”

Recognition of his emergence was gradual, tentative, piecemeal — almost verse by verse. Officially, he released nothing in 2006 and 2007; unofficially, depending on how you were counting, the diminutive young man was nearly cracking triple digits on track counts per year. There were marvels to be found. “Fireman” was a single, a generic paean to his hotness/ability to douse others’ hotness. And yet he still found time for stuff like “been in that water since a young’un’, you just shark food / Quick Draw McGraw, I went to art school.” The trippy, self-aware “I Feel Like Dying” — Wayne, high as balls, but in on the joke — should’ve always been a radio smash. “Gossip” was Wayne locked-in rigidly, showing off the nuts-and-bolts technical know-how, methodically accounting for every last syllable. “I am a living pio-neer / near Zion,” he zipped and darted. “Fear God / not them”:

My favorite, though, was always Dedication 2. This was a classic true mixtape: not just a proper album, released for free, but a jagged, patchwork collection of ganked beats, cut-off freestyles, and drop after drop — “You are watching a master at work.” Bits of it still ping around my head, catchy little fragments Wayne couldn’t be bothered to flesh out, he being too busy gleefully flitting from beat to beat. (I also have the physical copy of the tape that I bought at an actual Canal Street mixtape stand somewhere at my parents’ house). The most thrilling thing was the feeling that he was inhumanely inexhaustible, that he’d never run out of brilliant bullshit to spit. It was Wayne as high-powered hose: point him whichever direction you’d like, and there he will lay waste.

I preferred to think the mixtape run wasn’t calculated, that Wayne just woke up one day with the muse. Of course, to his credit, it was always a strategy. In 2009, he told Rolling Stone, “I gave [the label] one little message. I said, ‘My niche, that you’re going to sell for me, is that he’s the talentedest n***a ever. It’s not my face, not what I wear. You’re going to sell that this n***a is great every time. Every song that comes through for clearance, you clear that motherfucker. Every mixtape you hear about, you shut up. When it’s time to drop, watch what happens.'” What happened was millions of copies of Tha Carter III sold.

It was easy to root for a dude who wasn’t waiting for anything to come to him: Wayne called himself the best rapper alive way before it made any sense to do so; eventually, we caught up. And when Jay-Z made his return, on Kingdom Come, Wayne got defensive. “You left on a good note,” he told Complex. “This was your house. All the people in the house were saying ‘Yo, this is Jay’s house. He’s bowing out gracefully. We all say he’s the best …” You come back and think this still your house? Nah n***a, we fucked bitches in your bed already.”

It feels miserly to complain about a guy falling off after he’s produced volumes — rich, timeless, musky, leather-bound volumes. I don’t want to complain. I do wonder, though.

There’s the matter of his voice: At some point, the croak whittled down toward something whiny. Jay-Z’s voice has been dulled with age, too; compare the all-possessing baritone of “Where I’m From” to the brighter hue Jay trots out these days. Jay’s skill set deteriorated, as well, but, in his case, we don’t have to consider the impact of a drug dependency. And Jay found a new lane. It’s a measured, less-exciting lane, one far more dependent on personality than flow. But at least with Jay, we’re not constantly reminded of what was.

Then, there’s the cough syrup. For years after Rikers, the terms of Wayne’s probation mandated that he stay sober. When Tha Carter IV failed to live up to the expectations established by the spazzy mania of lead single “6 Foot 7 Foot,” I remember a hypothesis kicking around: Might “6 Foot 7 Foot” — the only track on the album on which his wordplay didn’t seem blunted — have been the last track recorded before he had to put down the codeine? Since, we’ve been working under the assumption that this new Wayne is a sober Wayne. (That assumption was disrupted by the seizures: TMZ reported Wayne suffered the attacks after going on a syrup binge).

Even without court-mandated sobriety, though, I wonder how long he could’ve maintained his elite level. For years, it seemed, all he had to do was open his mouth. And for years, he did, constantly. Isn’t it possible that eventually, after long enough of that kind of thing, you run out of words?

FX Spins Off a New Network with Sunny and The League, Reveals Ambitious Plans for TV Domination