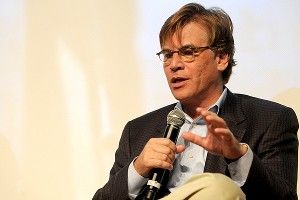 Over the last day or so, this “Sorkinisms — A Supercut” video has been making the rounds. It’s a little over seven minutes of Aaron Sorkin’s characters from throughout his various film and TV productions, repeating phrases, references, pickup lines, breakup lines, and even some peculiar pronunciation choices. The video is cut fast and seamlessly, and is pretty entrancing: The words leap from West Wing to Sports Night to The Social Network and back, and you’re left there, zoning out, with all that exquisite patter acting as your own strange version of the Sharper Image Sound Soother White Noise Machine. But the implication here, considering both the target and the timing — right in the middle of all this Newsroom-based repugnance — is that Sorkin is a bit of a cheap hack. And I say, can we let the man live? He’s written the scripts (famously, almost entirely by himself) for 88 episodes of The West Wing, 45 episodes of Sports Night, 22 episodes of Studio 60 on the Sunset Strip, plus A Few Good Men, Malice, The American President, Charlie Wilson’s War, The Social Network, and Moneyball, all while cultivating a divisive, instantly recognizable style — so would you mind terribly if Aaron Sorkin repeated himself for seven minutes? Also, like 30 seconds of this is people making fart noises with their mouths, which … come on. That said: It did break my heart forever to find out that the “I could buy Mt. Auburn Street, take the Phoenix Club, and turn it into my Ping-Pong room” line from The Social Network was on Studio 60 first.