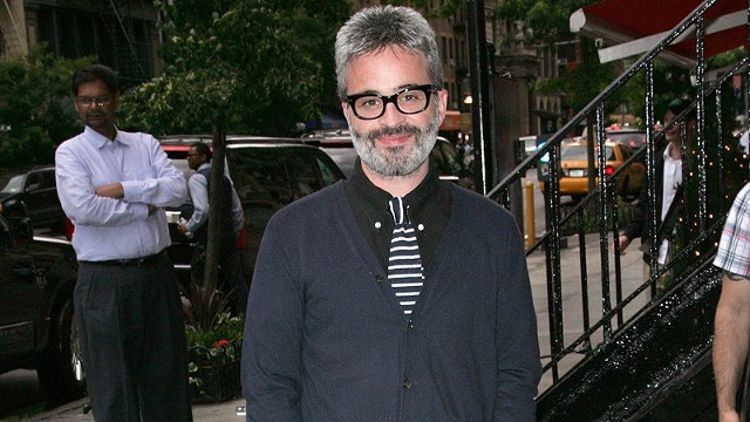 Alex Kurtzman and Bob Orci share an office — and a spacious desk — in a largish bungalow on the Universal Studios lot. The ceilings are high, the décor is film-geek-made-good — vintage posters for Michael Powell’s Peeping Tom and General Dynamics, a giant Iron Man head, a circa-1983 stand-up Star Wars arcade game, couches you could hibernate on.

This is what a comfort zone looks like: Kurtzman and Orci, who met nearly 20 years ago in a film class at the Crossroads School in Santa Monica, got here by writing blockbuster entertainments both large (J.J. Abrams’s Mission: Impossible III and Star Trek) and gargantuanly large (the first and third Transformers films). Together, they’re responsible for something like $3 billion in box office revenue. Even their last bomb, 2011’s Cowboys & Aliens, grossed $174 million worldwide. There’s a black Porsche sitting sleek and Decepticon-like in Kurtzman’s parking space out front.

They call their production company Kurtzman & Orci Paper Products, which is commendably self-deflating. Kurtzman and Orci are regular-looking guys with regular-guy haircuts. Orci is carrying around an iPhone with a shattered screen.
Kurtzman is wearing a cardigan, corduroys, and amusing socks. He is connected enough to unselfconsciously refer to Hollywood as “The Town” — as in “The Town was very supportive of the movie” — but he looks like an IT guy who’s been to more than 30 Decemberists shows.

It’s a Thursday afternoon in mid-June and they have more big movies to write. They’re halfway through the first draft of the sequel to next month’s Spider-Man reboot, which starts shooting in January — that’s soon in summer movie time. And one of these days they’ve got to sell some TV pilots to Fox — they’ve had a three-year development deal there since 2010, and so far nothing’s been picked up. (“I know,” Orci says. “Don’t cry for me, Argentina.”)

But today Kurtzman’s talking about a small movie. It’s called People Like Us, it’s his directorial debut, he wrote it with Orci and their college buddy Jody Lambert over the course of about eight years, and they shot it for less than $20 million, mostly (a few scenes on the downtown Standard’s roof notwithstanding) in the parts of Los Angeles you don’t often see on TMZ. Chris Pine plays Sam, an unscrupulous corporate hustler; when his record-producer dad dies, he meets Frankie, the half-sister he never knew he had, a single mom and recovering alcoholic played by Elizabeth Banks. Complications follow, as does redemption. Grown-ups deal with their stuff. Not one building explodes. It’s a departure.

(Here the ghost of Michael Bay flits through the room, waving fistfuls of red-white-and-blue dynamite.)

The movie has a lived-in, places-and-things specificity — L.A. courtyard apartment complexes, medical marijuana, Neptune’s Net, Entenmann’s, the Clash’s “Spanish Bombs,” conversational references to Faith No More’s “Be Aggressive” and Sweep the Leg Johnny — that tips it toward the real even as the sap rises. It has that Cameron Crowe feeling we haven’t gotten from a Cameron Crowe movie in a while. It’s a good film about recognizable human emotions, built around two attractive and talented medium-size stars who don’t generally get real pitches to hit, dramatically speaking — which means it’s the kind of movie studios are supposedly loath to green-light at all, let alone release in the middle of superhero-and-alien season. Kurtzman’s well aware of this. Even given his and Orci’s track record, he feels they got “very, very, very lucky.”

“It’s still a business, no matter what,” he says. “And even people who are very successful, I think often their passion projects sit in a desk somewhere. So I was very, very, very lucky. I really thought that if the movie ever got made at all, it was going to be made on a micro-budget; I’d be lucky if I could scrape some money together and we’d go do it guerrilla-style, and that’s what I was fully prepared to do. I never actually really thought that it would happen, you know?”

Among other things, People Like Us is about lists — Pine’s character bonds with his half-nephew (Michael Hall D’Addario) by giving him a 10-album crash course in the punk-rock canon, and later passes on to him the six rules that hung on the wall of his father’s vinyl-cave office. So here, in that spirit, are a few things Kurtzman learned from making the first Kurtzman-Orci movie in which they “couldn’t cut away to an explosion or a robot.”

1. Always ask yourself, “Am I setting this movie in a fish store for no reason?”
People Like Us is loosely based on true events — Kurtzman really did have a half-sister he didn’t meet until he was 30, although he knew of her existence growing up. Kurtzman says that when he tried to turn this story into a film, he had to curb the impulse to over-fictionalize it — in the first draft, for reasons Kurtzman can’t fully explain, the protagonist’s dad left him a fish store modeled on New York’s venerable smoked-salmon emporium Russ & Daughters. “It was really, really bad,” Kurtzman says of this version. “I think I was excited that I managed to get something down on paper, but when I started showing it to people, the response was, unilaterally, ‘This is really bad.'”

2. Work builds character.
“What your character does for a living is one of the most important choices you can make in a screenplay,” Kurtzman says, “even if their job is tangential to the story, because it tells you everything about the condition of their life. Are they doing what they love? Are they doing what they hate?” It took him a while, he says, to nail down Sam’s job — he knew the character would be a man who’d grown up in a house of lies and gone on to be a gifted bullshitter, but he couldn’t figure out how to show him using that gift. He plugged in all manner of glib-handsome-movie-guy jobs — Sam was a club promoter in one version, a sound engineer in another. Nothing worked. “The script started to become, like, a living organism that rejected anything that wasn’t truthful.”

Then Kurtzman had a conversation with a friend who’d been in the corporate-barter business, a job that involves the trading of large quantities of raw material and is, according to Kurtzman, “100 percent dependent on your ability to bullshit.” In the finished film, we see commitment-phobic Sam doing deals to move dubious freight car loads of tomato soup, “questionable baby formula,” and “anything with an expiration date.” Metaphors!

3. Every contextually inappropriate Christmas decoration tells a story.
One reason the movie took eight years to write? “I was acquiring details as they came to me in life. So I’d be stuck in traffic, and I’d look over, and I’d see that there was an old apartment building, and on the door were these rusted sleigh bells and it was June, and I’d go, ‘That’s Frankie’s door. That’s exactly what her door looks like.’ And slowly, I would just take these details that life would present, and I’d put them into the script.”

4. When possible, hire a man whose father became a rock god in Manila to punch up your script.
Kurtzman and Orci enlisted the help of a third co-writer, their college friend Jody Lambert, to make the growing-up-around-the-music-business aspects of the story feel real; Lambert’s father, Dennis Lambert, was a ’60s folkie turned pro songwriter whose credits include hits like the antiwar allegory “One Tin Soldier,” the Commodores’ “Night Shift,” and Starship’s “We Built This City.” (He even has a credit on Jay-Z and Foxy Brown’s “Ain’t No N—-,” which samples “Ain’t No Woman Like the One I Got,” a hit he wrote for the Four Tops.)

“He moved to Boca, and he started selling real estate,” Kurtzman says of Lambert senior, whose rock-memorabilia collection furnished Sam’s dad’s office. “And one day his phone rings, and it turn out this album he did in the late ’70s or early ’80s, of his own stuff, which wasn’t particularly successful here, is no. 1 in the Philippines, and they want him to come tour there.” Jody Lambert made a documentary about this, called Of All the Things: “They got off the plane and his dad was like Paul McCartney. It was incredible.”

5. Even in your small, personal movie, don’t be afraid to (figuratively) put a bomb under somebody’s chair.
When Sam first meets Frankie, he doesn’t tell her they’re related; then, as they get to know each other, he continues holding back that piece of information. It’s the most movie-like aspect of this movie — the old liar-lies-his-way-into-real-relationship-that-is-nonetheless-a-sinkhole-waiting-to-open-up-at-the-worst-possible-time construction — and it will either make or break the movie for you, depending on how you feel about that sort of thing. Kurtzman said it was crucial: “I just loved the problem of it. Like, how are they going to get out of this? It’s the classic Hitchcock thing — Hitchcock starts the scene and then he puts the bomb under the chair and then they talk for 20 minutes and everybody in the audience is like ‘Get out of the room!’ I think there’s a fundamental distinction between character-driven movies that are just really lovely slice-of-life movies and character-driven movies that you remember 20 or 30 years later; the common denominator with the ones you remember is that they all have some really complicated emotional problem at their core.”

6. BONUS WISDOM: How to play drunk, according to Chris Pine:
The montage of Sam raiding the liquor cabinet and partying in his dead dad’s study is some of the best non–Captain Kirk work Pine has ever done; it’s like watching the damaged Tom Cruise from Jerry Maguire play the young home-alone Tom Cruise from Risky Business. “Playing drunk is a hard thing to do,” Kurtzman says, “but Chris said something smart; he said, ‘You know, the key to playing drunk is that drunk people are trying not to be drunk. They’re not wobbling around: They’re trying to seem sober, and so you see them really working to focus, and that’s what sells drunk.’”

Filed Under: How to, Movies, Star Trek, Transformers

Magic Mike vs. Berry Gordy vs. Ginger Spice: Which of This Week’s Rumored Musicals Should Actually Happen?