Least Likely: Off Broadway Phenom Annie Baker Is Confounding Some But Charming All the Right People 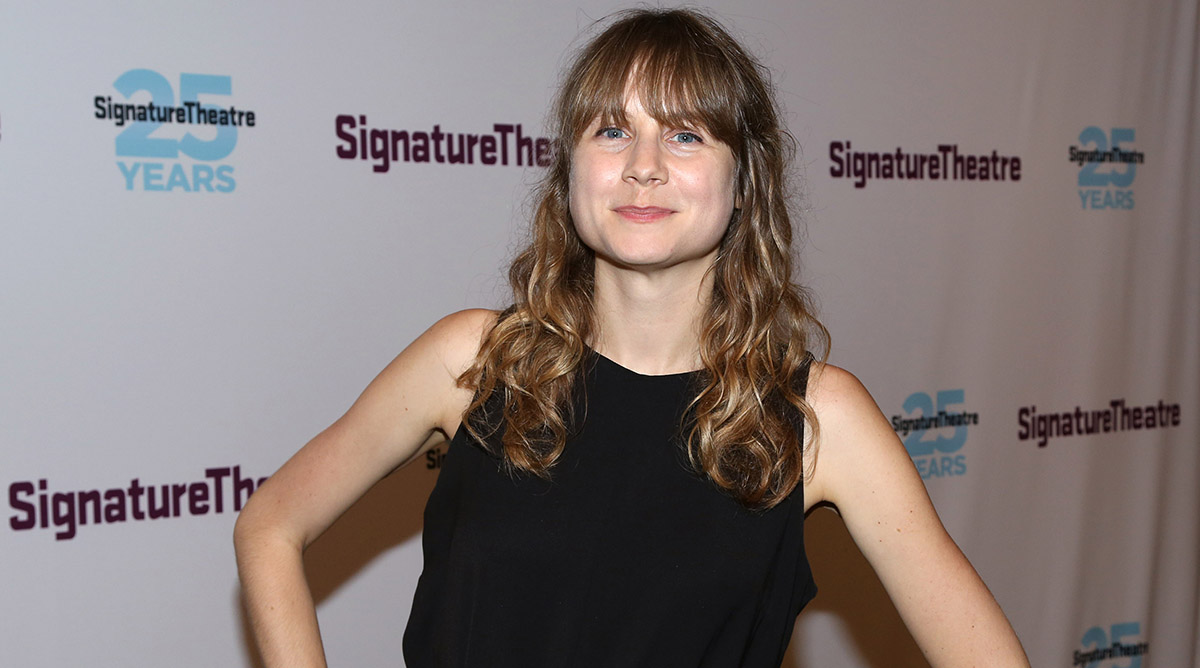 The thing about being the blazing white-hot comet of American theater is that while Annie Baker is a titan to some and an enfant terrible to others, to you she’s most likely a person whose name you are reading for the first time.

Which brings us to a recent afternoon in New York’s lovely Bryant Park, during which Baker shows up with a can of unflavored seltzer, wearing a cotton crewneck and a nagging feeling that this is a terrible idea. It’s nothing personal.

“I actually think I’m very social,” the 34-year-old Brooklynite explains. “But this — it’s a weird dynamic. It’s horrible. There is sort of a constant paranoid awareness of the words coming out of my mouth.” And Baker knows from awkward encounters: They are her grist.

Baker’s first play, Body Awareness, a particular twist on the campus comedy, was produced in New York when she was 27 years old. Her next two, The Aliens and Circle Mirror Transformation, split the Obie Award for Best New American Play; the latter was the second-most-produced play in America in 2010. In 2013, The Flick — a three-hour-plus epic, made up primarily of pauses, taking place entirely during popcorn-sweeping sessions at a dumpy Worcester County movie theater — sparked enough enraged walkouts that it became a running arts controversy. It also won the Pulitzer Prize.

John, her latest, has just completed its run at the Signature Theatre. A crumbling-relationship drama set in a vaguely unnatural Gettysburg bed-and-breakfast, it starred Girls refugee Christopher Abbott, Inherent Vice breakout Hong Chau, and The Mary Tyler Moore Show’s Georgia Engel — in her first-ever leading role, at age 67. Engel played what has been described as a “neo-Platonist witch.” The show was greeted with yet another round of hosannas. The New Yorker’s Hilton Als: “Annie Baker’s John is so good on so many levels that it casts a unique and brilliant light.” 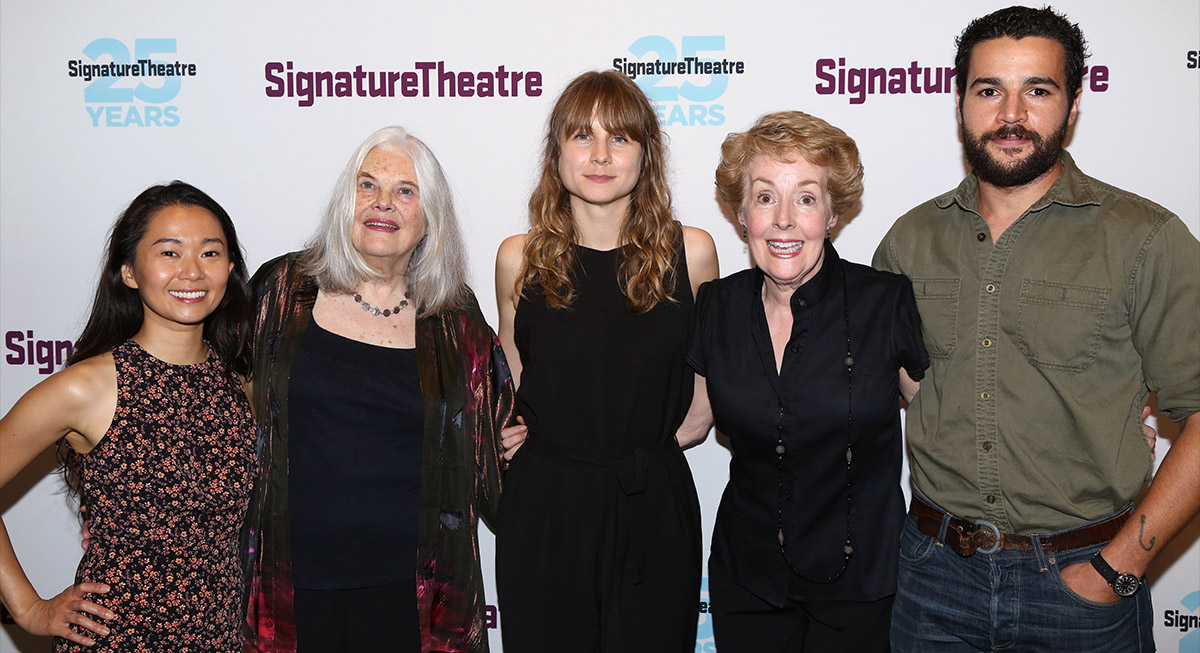 Baker’s plays have deep roots in the mundane. Circle Mirror Transformation takes place in a community center drama class; The Aliens, out behind a coffee shop. Lots of writers would love to write how people talk: Baker just does it. She doesn’t forget that sometimes people, when they’re talking how people talk, are also funny. And that sometimes they’re mean, or self-indulgent, or worthy of love, despite themselves. In the restraint and silence of her plays — her complete disregard for your desires — there is something undeniably punk.

Ever since Body Awareness hit, Baker has had producers beckoning her to L.A. For a while, she was even working on an HBO pilot, about a business-school kid returning to the socialist Northern California farming commune of her childhood.1 It never moved forward, but there were mercenary gigs to consider, jobs that had been good to many of her friends and peers. From network to Netflix, TV writing rooms are well stocked with overeducated East Coast dramaturgists.

But at some point Baker decided, “I couldn’t do that anymore. I just can’t write dialogue on cue. It sounds precious, which is why I resisted it for a long time. I was like, ‘Oh come on, you have to be able to …’” She drifts off. “Also, when you haven’t had money in a really long time, anyone offers you a job for writing and you’re like, ‘Yeah! Hire me!’”

“It’s terrible to do bad work. There’s nothing worse than the feeling that you contributed something stupid to the world. It’s not about outside response. It feels like a moral issue. I made something bad.”

Cutting herself off from those opportunities has been scary, because it’s “financially unstable”; being a hot Off Broadway playwright is not exactly, you will not be surprised to hear, a cash-flow pipeline. But there’s more than a little relief, too.

“People flee to L.A. and you never hear from them again,” she says. “So in some ways, I feel lucky. Friends of mine who are more skilled craftspeople have gotten really off track because they’re really good at doing a number of things. And I’m really bad at doing most things. Which brings me back to the thing I really wanna do.”

That odd, stubborn trajectory has also somehow bought her more control. Her insistence on not going Hessian in Hollywood has brought her a rare auteur control. She won’t talk plot, or setting — or anything, really — but she’s now writing a movie that she will also direct.

Her film is funded by the largesse of Scott Rudin, the Hollywood power player who also happens to be a fanatic supporter of New York theater. His most recent cash cow is The Book of Mormon, which has grossed close to an incomprehensible $400 million. But he’s just as geeked about having produced The Flick at the Barrow Street Theater, which seats 199 people.

“What’s great about Scott is he has his opinion, and it’s not dependent on whether or not the play got a good review or whether subscribers liked it,” Baker says. “You realize after working with a lot of artistic directors and producers that so many of them don’t have a real opinion.”

Of Baker, Rudin gushes: “She’s making her own rules about time and space. And where better to do that than in the theater?”

The Flick opens with two minutes of punchy — in the fist-to-the-face sense of the word — sight and sound. The music is the blaring prelude to the 1958 film The Naked and the Dead; the images are indecipherable, as they are being shot from a projector on the stage and onto the audience’s eyeballs. Once the projector cuts out and the relief of the lights comes up, we see the seats of the movie theater. In a clever bit of discombobulation, they face us. We are the screen.

Then two employees shuffle in, brooms in hand. An older guy named Sam. A younger guy named Avery. They sweep and they chat. Eventually, you hear about, and later meet, a third character, a woman named Rose. And you wait for the three to fall into the comfortingly distracting rhythms of theatrical conversation. And you wait, and you wait. Because everything that happens here happens in fits and starts. There will be love and heartbreak and unspeakable betrayal. But you must be patient, and you must be still. 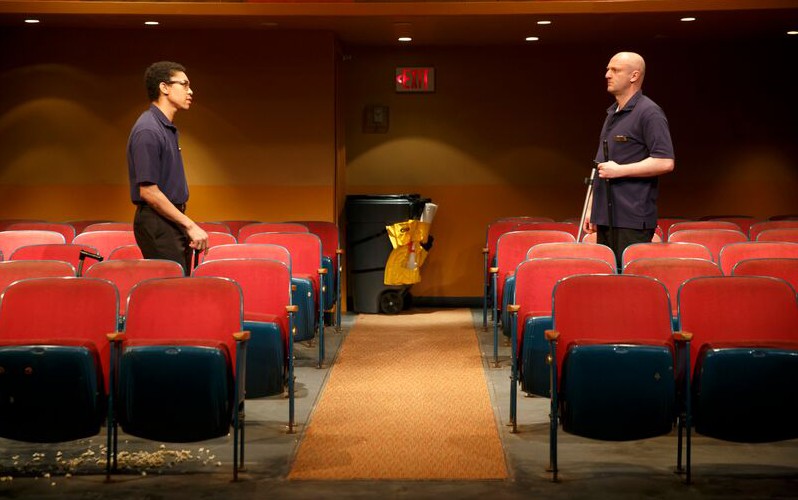 To take a setting that suggests a breezy whiz-bang slacker hang and to turn it into this — painful real-time minutiae; awkwardness, rendered 1:1 — is sly and subversive and cuttingly effective. “I’d find myself absentmindedly going through certain lines [while offstage], the way somebody might hum a song,” says Matthew Maher, the actor who plays Sam.2 “The dialogue was sort of in my body.”

When The Flick was first staged, at Playwrights Horizon, there was a minor uproar: Subscribers were walking out at a furious rate, threatening to cancel subscriptions. The artistic director was moved to write a 1,000-word open letter engaging in a discussion on the play. The New York Times “Arts” section covered the controversy with glee. There was something delectable about a young kid using nothing more than silence to rattle the city’s wizened theater cognoscenti right out of their seats.

Some playwrights might have embraced the pose of winking radicalism. But Baker bristles at mention of the whole thing. Because her world is clearly not a place for gimmicky audience manipulation; because when she sits down to write, the only ideal audience is herself. “Thinking about what I want to see — that’s all I can do.” And these characters come from her life.

The Flick is set in a place not far from Baker’s native Amherst, Massachusetts, a peculiar college town caught somewhere between effete liberal arts institutions, state-school buffoonery, and the still quietude of farmland.

Her parents divorced when she was 6. Growing up, she imagined her life novelistically. “It’d be like, ‘No, she said,’ or ‘as she leaned back in her chair,’” Baker explains. “The whole thing was always in print in my head, like a bad YA version of my life.”

As a teenager, she would cruise with her friends in aimless and endless circles through harvested acres down toward the Cumberland Farms. Your more ambitious Amherst Regional High students might conspire their way into the town’s many college parties. “I wasn’t cool enough to party with UMass kids,” Baker says. “I partied with, like, 35-year-old townies.”

She was an unabashed drama geek, acting in (Miss Adelaide in Guys and Dolls, Horatio in Hamlet) and staging plays. But it wasn’t until college at NYU when she worked up the courage to show her own work to anyone.

Baker’s high school teacher John Warthen — a “huge part of my development,” she says — recalls his former student with great warmth. He remembers reading a scene, set in a restaurant, that she turned in that grew out of her “observation log,” a class assignment to record “conflict behaviors” and “verbatim dialogue.”

“She described it as a fragment,” Warthen says, “and said she didn’t want us to stage it. And in agreeing not to, I assured her that the scene was just about viable all by itself, even though the speakers did nothing in the scene but talk and pick from the bread basket.”

Body Awareness found its way to the stage before Baker had even conceptualized being a full-time playwright. She’d worked odd jobs her whole life. She just assumed she’d have to support herself financially while writing her plays. The plan was vague: any job “that wasn’t, like, soul-crushing” would have done.

The trash bins of the nation’s MFAs are chock-full of the shattered dreams of cocksure young men and women, convinced they’ll be the one to buck the odds — to actually achieve superstardom. Baker was not one of them. “I was definitely not most likely to succeed,” she recalls. “No one [said], ‘You’re gonna be a famous writer.’ I was definitely not the one.”

That she became, you know, that blazing comet is more surprising to her than to anyone else. There was no expectation for money, for attention, for fame. All that was left was the work. As she explains before heading back to the New York Public Library to do some more of it, her motivation now is simple enough: “I just really don’t want to make shitty art.”