We Went There: Larry David’s ‘Curb’-like Broadway Debut, ‘Fish in the Dark’ 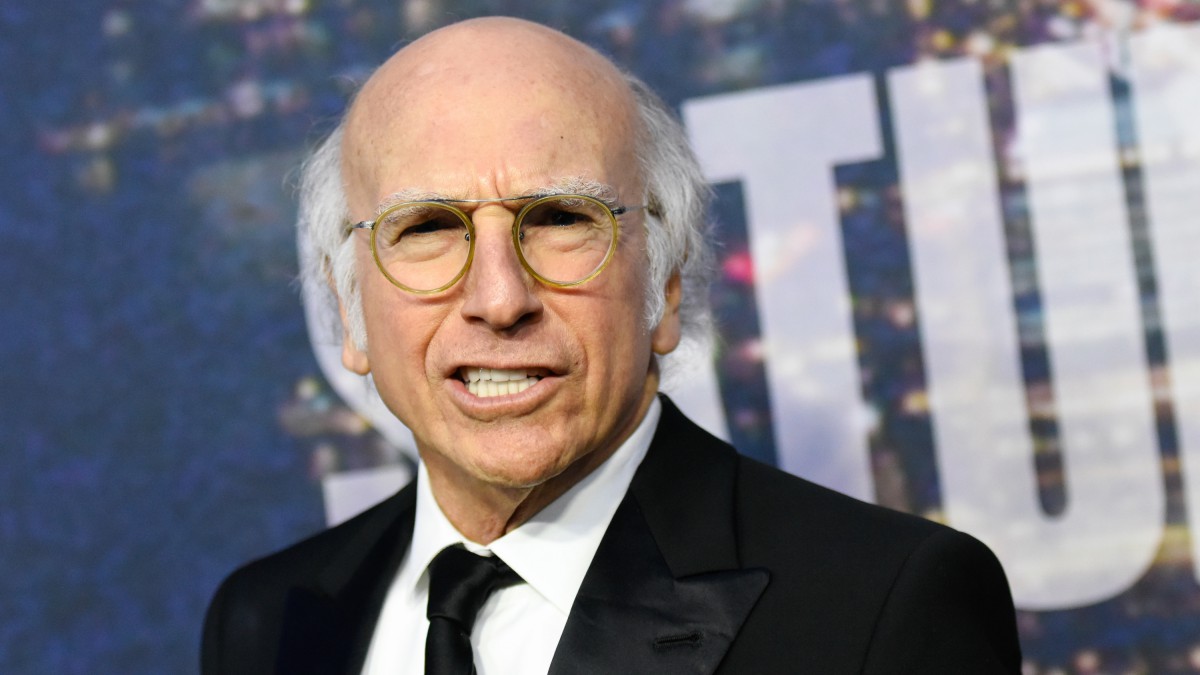 In the closing minutes of Curb Your Enthusiasm’s Season 5 finale, a disembodied Larry David floats above his hospital bed and eavesdrops on the assembled friends and loved ones who believe he’s just died. “Is there anything you can tell me about his will?” Larry’s wife, Cheryl, asks a lawyer, still clutching the tissue she used to dab her eyes. Larry’s agent and closest confidante, Jeff, interrupts her to try to weasel out of a deathbed promise to pay back a debt. Cheryl holds him to it, angering Jeff’s wife, Susie. “He’s petty in life; he’s petty in death,” Susie says, condemning David before his corpse is cool. A doctor and a rabbi look on, aghast.

Picture that scene extending for close to two hours and you’ll have a feel for Fish in the Dark, David’s Broadway debut, which opened at the Cort Theatre on Thursday after a month of packed previews and record advance sales. David, who wrote the play, stars as Norman Drexel, one of a dying father’s two surviving sons. Norman’s excitable, self-interested relatives can’t bear to be around one another, so it falls to him to be the Michael Bluth of the fractured family — a responsibility he’s ill-suited for, since he’s as untactful as the others.

For David, death is to be dreaded not for its finality, but for the tiresome social rituals that surround it. Those conventions, as deeply ingrained as any in our culture, are a rich source of humor for a social assassin, and David returns to them repeatedly on Curb, disrupting “death etiquette” by passing up a chance for forgiveness, dropping a $50 bill in a receiving line at a post-funeral reception, or delivering a last message about mayo. When Cheryl’s aunt dies, Larry woodenly recites the words one says in such situations, while plotting to go golfing. He mocks Richard Lewis and Marty Funkhouser for excessive self-pity about their dead parents. He snacks on a dying dog’s last meal and steals flowers from a roadside memorial. He admires anyone who dies without making a big deal about it: like his mother on Curb, whose funeral he misses because she didn’t want her death to interrupt his trip, or his brother in Fish in the Dark, who says he wouldn’t mind being buried in a Dumpster. Acknowledging death’s universality, and the absurdity of being alive at one moment and not at the next, seems to strip him of the need for weeping and wailing. As he explained when he was asked where he got the idea for Fish, “My friend’s father died, and he was telling me about it, and I thought, ‘This is pretty funny.’”

In Fish in the Dark, David, as always, builds a character by curating the minutiae from his own inner monologue. Is it acceptable to bring a date to a deathbed? Is it customary to tip a doctor? How would Gandhi — who, Norman’s niece reminds him, once said, “You cannot shake hands with a clenched fist” — have felt about the fist bump? From the moment he slouches onto the stage in his familiar earth-tone attire, it’s clear that this is the same David whose Simple Shoes Curb and Seinfeld fans have walked many miles in, “Norman” or not.

Why do we like Larry? His screen persona isn’t empathetic, but he rarely demands sympathy or favors from others. He’s uninhibited, but he has a code, flouting what he believes to be arbitrary rules of behavior while fiercely (if somewhat selectively) upholding others. He’s likely to be both the rudest and the most logical member of any group. And despite his frequent dissembling, he’s more honest than most. That makes him the best candidate to defuse the Drexels’ dilemmas, most of which involve uncomfortable conversations about whether the expiring Sidney wants to stay on a ventilator, which brother his widow will live with, whether Norman’s wife can learn to tolerate Norman’s mother, and so on.

David is easily out-projected by the veteran actors in the cast. He compensates with gesticulations as exaggerated as his voice is subdued. Almost every sentence is preceded by a clap, a raised finger, or a knowing nod, if not a full-body bend. David became a much more polished actor during Curb’s run, and he knows how to hold a live audience’s attention, but his style suits Curb’s semi-improvised, off-the-cuff aesthetic better than it does the confined, pre-rehearsed blocking of a Broadway show. Every phrase and mannerism recalls a scene from a classic Larry scenario. Those constant, involuntary comparisons expose Fish’s shortcomings, but the positive associations make the play impossible to tune out. I chuckled much more often than I genuinely laughed, but my mind never wandered.

After almost 20 combined seasons of Seinfeld and Curb, there aren’t many oddities of human interaction that David hasn’t mined for material. Unsurprisingly, Fish in the Dark sometimes recycles. One character channels Uncle Leo when she complains about someone not saying hello. Another debates the difference between “dickhead” and “c-​-​-​” — an epithet whose shock value David has enlisted for laughs on more than one occasion. Toward the end, he unabashedly drops a Curb catchphrase, which earns an ovation but (like most catchphrases) feels like fan-service-y filler where a better joke could’ve been. The last play I saw before Fish — Hamilton, the hip-hop-inspired Lin-Manuel Miranda musical — left me recounting favorite scenes and humming all the way home. Fish left me filing away old Curb and Seinfeld scenes for a post-play YouTube tour. The most organic moment came at the end, when David grudgingly accepted a standing ovation from a crowd that would have showered him with preexisting affection even if (as he feared) he’d flubbed all his lines. From my perch in the balcony, I could see him enter upstage right and, grimacing, steel himself for the punishment of applause. He looked like he would’ve preferred to slip out the stage door. 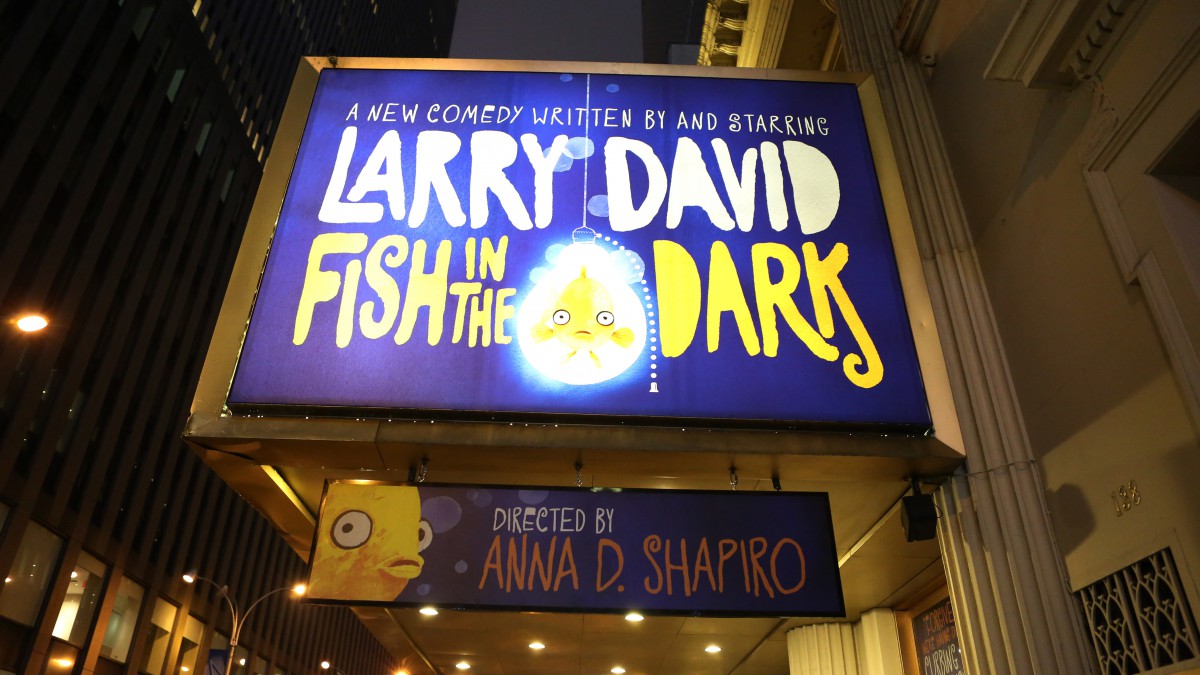 Although David’s imagination might follow some well-worn paths in Fish, it doesn’t make many concessions to the Cort’s cramped quarters: Director Anna D. Shapiro’s sets shapeshift as furiously as they would on the small screen, with one conversion so swift that it seems like sleight of stage. The cast is Seinfeld­-size, too; David’s crowded orbit makes room for Rita Wilson, Rosie Perez, Jayne Houdyshell, and 14 other actors. Ben Shenkman, playing Norman’s brother, occasionally lapses into the uncanny-valley territory occupied by leading men in Woody Allen movies who deliver lines like their author would, but the show mostly benefits from its deep bench, including Jerry Adler as Sidney, who bears a strong resemblance to Howard Lyman, his recurring character on The Good Wife. Marylouise Burke, who nails every line as Norman’s conniving aunt, might be the best of the bunch.

If I were scoring a Seinfeld edition of Bragging Rights, David would win in a walk, despite stiff competition. Jerry has done enough to make his surname known for more than the show, and Julia Louis-Dreyfus has escaped Elaine’s long shadow by creating an equally memorable comedic character. David, however, has not only chiseled a second project onto Sitcom Mount Rushmore, but also stepped out from under the cape and the Steinbrenner impression to become his own headliner. Fish in the Dark doesn’t reveal a different dimension to David; like Clear History, it’s a collection of Curb B sides, a fun diversion for fans but no substitute for Season 9. So, yes, Larry lacks range. But look on the bright side: Few actors get so much mileage out of playing themselves.

Binge-Watchalypse Now: The Heart of Streaming Darkness That Is Netflix’s 'Richie Rich' Reboot