Binge-Watchalypse Now: The Heart of Streaming Darkness That Is Netflix’s ‘Richie Rich’ Reboot 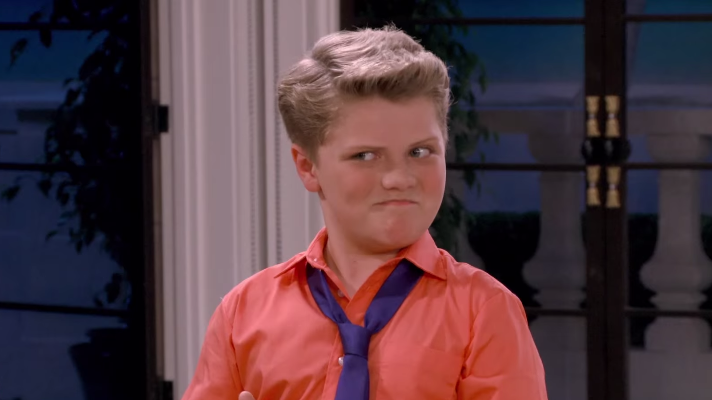 When left to its own devices, Netflix mostly makes award-winning, critically lauded programming (House of Cards, Orange Is the New Black, etc.). Why, then, has it allowed its reputation to be sullied by an unwarranted, unwatchable Richie Rich reboot it purchased, ostensibly sight unseen, from DreamWorks Animation’s AwesomenessTV? Why would I spend any time watching the damn thing? I’m infertile, which means the concept of “family-friendly entertainment” is and always will be useless to me.

It’s a good thing I don’t have children, though, because I’m poor enough that accepting the assignment to watch all 10 episodes of Richie Rich in one day, while definitely debasing, is an opportunity I felt I could not turn down.1 I watched the series alone, a 31-year-old divorcée lying prostrate on a soiled couch she purchased used off of Craigslist.

Below, dear reader, is an episode-by-episode account of my journey into madness.

According to its inane title sequence, our titular Rich has a “trillion dollars” he earned by taking all the “vegetables he never ate” and turning them into a “new energy source.” Now he lives in a “huge mansion,” which is comically computer-generated. This was the first in a series of many obvious cost-cutting measures — each character, for example, has a total of four outfits, even though there are a mere 10 episodes. One can assume the entire season was shot in one day, and in sequential order, so as to save on editing costs.

“I guess you could say,” Richie tells us in the title sequence, “by not eating my vegetables, I became the richest and luckiest kid in the world!” I am horrified by the message this sends to young children. The sole consumption of Pepsi and Flaming Hot Cheetos does not a Rhodes scholar make!

The first shot in the series is a poorly Photoshopped portrait of our protagonist looking smugly regal; it is a harbinger of things to come. When the real Richie rides into frame in his child-size sports car, one cannot help but notice that his makeup looks whorish. The laugh track is canned, and the acting nears sub–dinner theater quality. 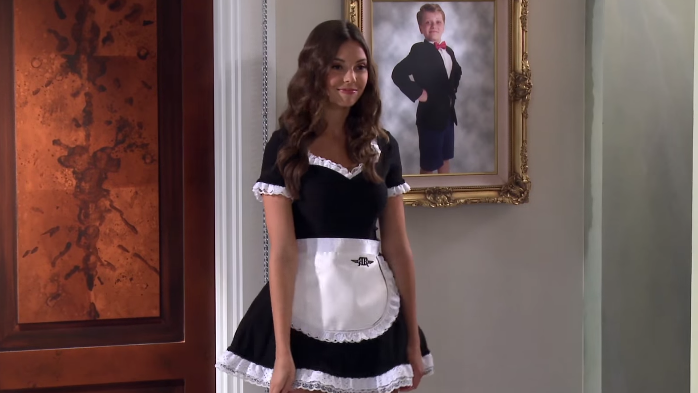 Richie’s maid is a hypersexual robot dressed in a French maid’s outfit, complete with wholly inappropriate thigh-high stockings. I’d tear the breaks off that cyborg, I thought, while staring at her vacant visage. I’m an adult, so I’m allowed to think such thoughts. Children, however, are not.

According to a 1-star Netflix user review, one should “Avoid [the series] at all costs. Also, might I add, it’s creepy that a children’s show has an overly sexualized French maid.”

Her booking of the role, no doubt, unspeakably excited the woman who plays said robot. One would imagine she breathlessly told her parents the news, and that they in turn watched the program in its entirety from their Barcaloungers in the Midwest. Hollywood is a rough town; even the victories are often failures.

The end credits revealed that the series has a staff writer in its employ. “Hey, guys, I finally got staff,” I can imagine Bo, said writer, excitedly telling his parents. Now, if you’ll excuse me, I need to lie back down.

I’m delighted by the existence of the Murray character, Richie’s “money manager”; every line he speaks is more nebbish than the last. An anti-Semitic caricature? Now that’s in my wheelhouse. 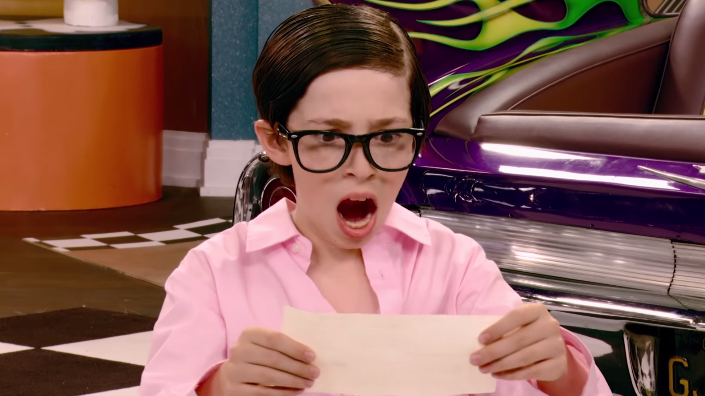 The actor’s IMDb page doesn’t list his age. What if he’s 28, but playing 12? It’s possible, right? I have much to discuss with him.

This episode involves the Rich children trying to find a date for their dad, in the interest of getting him out of their hair. Ah, but where to look? “The meeting place of all things lonely and desperate,” Richie tells his sister. “The Internet.” The line is too funny for the program; hearing it feels as though one is listening to the pained cries of a writer from the bottom of a well.

Instead of doing a book report on The Wizard of Oz, Richie spends some of his “trillion dollars” making a feature-length film adaptation of the novel instead. Why he even feels the need to attend school is beyond me. He has, after all, a trillion fucking dollars. He could murder his teacher and get away with it.

None of the characters on Richie Rich is kind. Self-serving, mean, and constantly trying to get theirs at the cost of others, they teach the youth of America a horrific lesson. According to yet another 1-star Netflix user review, the show is, “Garbage. Let your kids watch this if you want them to become materialistic, sexist, and awful.”

Back in my day, “family-friendly” entertainment didn’t have to be hateful and inane. I mean, Tiny Toons contained Orson Welles references — I, of course, didn’t understand them at the time, but I can certainly appreciate them now. In related news, I’m an 800-year-old spinster. Get off my lawn! OK, so I can’t afford a lawn, but get off the front porch of my rental! OK, so it’s not a porch per se, it’s really just two steps leading up to my fortress of solitude. But still! Get off!

Murray teaches Tulip how to do math, while his sadistic sister is left to care for Richie when their father selfishly, irresponsibly leaves his children alone for the night to work on his fantasy football league.

Each episode constantly cuts to a nonexistent commercial, implying that the creators had the delusional idea that the series could get to 100 episodes and thus be eligible for syndication. Nothing could be more improbable. Were this to be on network television, it would surely be canceled mid-episode.

Richie’s friend Darcy spends millions of his dough in 10 minutes; Murray, in turn, offers to find a guy to “make her disappear.” The only females on the show are either vapid or hatable. The sole woman of age is, again, a hot robot in a French maid’s outfit.

For reasons I can’t quite fathom, I had to wait until halfway through the sixth episode for a character to say “YOLO.” It was Murray, who was instructed to “loosen up” and wantonly spend Richie’s cash. He, in turn, began dressing like a caricature of a rapper and throwing wads of dough around a milkshake restaurant.

There is no mother in the Rich household; her absence is never acknowledged. The kids mostly avoid their idiotic father, who for all intents and purposes seems to be hopelessly incompetent. In this episode, he wears a dress for comedic purposes — his degradation is complete. The fact that the show’s writers couldn’t even be bothered to acknowledge the household’s lack of a maternal figure is telling. Everyone on the program is so one-dimensional, they may as well not have been biologically generated.

There is, at one point, an extended Frozen song-and-dance parody performed by Darcy, done to celebrate Murray having traveled to Antarctica to retrieve a check for Richie — his absence means she can now spend Richie’s money with abandon. “Let him freeze,” she warbles in a prepubescent, nails-on-chalkboard caterwaul.

We learn that Murray’s enemy is a boy named Saul “The Human Adding Machine” Rubenstein. Richie Rich, I slowly realized, is a streamable hate crime. Murray reveals that he’s scared of the “bullies at Sunday School, who always take [his] bagel money.” What — did the writers think it would be too anti-Semitic to say “Hebrew School” instead of “Sunday School”?

The presence of the show is as perplexing as its content. Is the character of Richie Rich so old that it’s now part of the public domain? That’s the only logical explanation why Netflix would license it. It must have cost next to nothing. It certainly wasn’t to up their cachet. (After all, according to yet another 1-star Netflix user review, it’s “No where [sic] near the quality of House of Cards.”)

Episode 9 (called “$pooky $tuff,” if you’re wondering) has audio sync issues. The issue being, it’s not synced. The dialogue occurs 30 seconds before the action; one would assume it would be impossible to watch, but watch it I did, as the error didn’t profoundly alter the fundamental unwatchability of the program in general.

In the final episode, Richie falls in love with his replacement maid, who happens to be in his own age bracket.2 I’d go into more detail, but what’s the point? It was bad enough I watched the damn thing; worse yet that it exists.

Megan Koester (@bornferal) is a writer/comedian. She lives in Los Angeles.

Songs of the Week: Spring Break of the Mind, Featuring Omarion, Nadine Shah, and Nickelback

We Went There: Larry David’s ‘Curb’-like Broadway Debut, ‘Fish in the Dark’