Comedy Central’s ‘Review’ Is the Bleakest, Most Hilarious Show You’re Not Watching 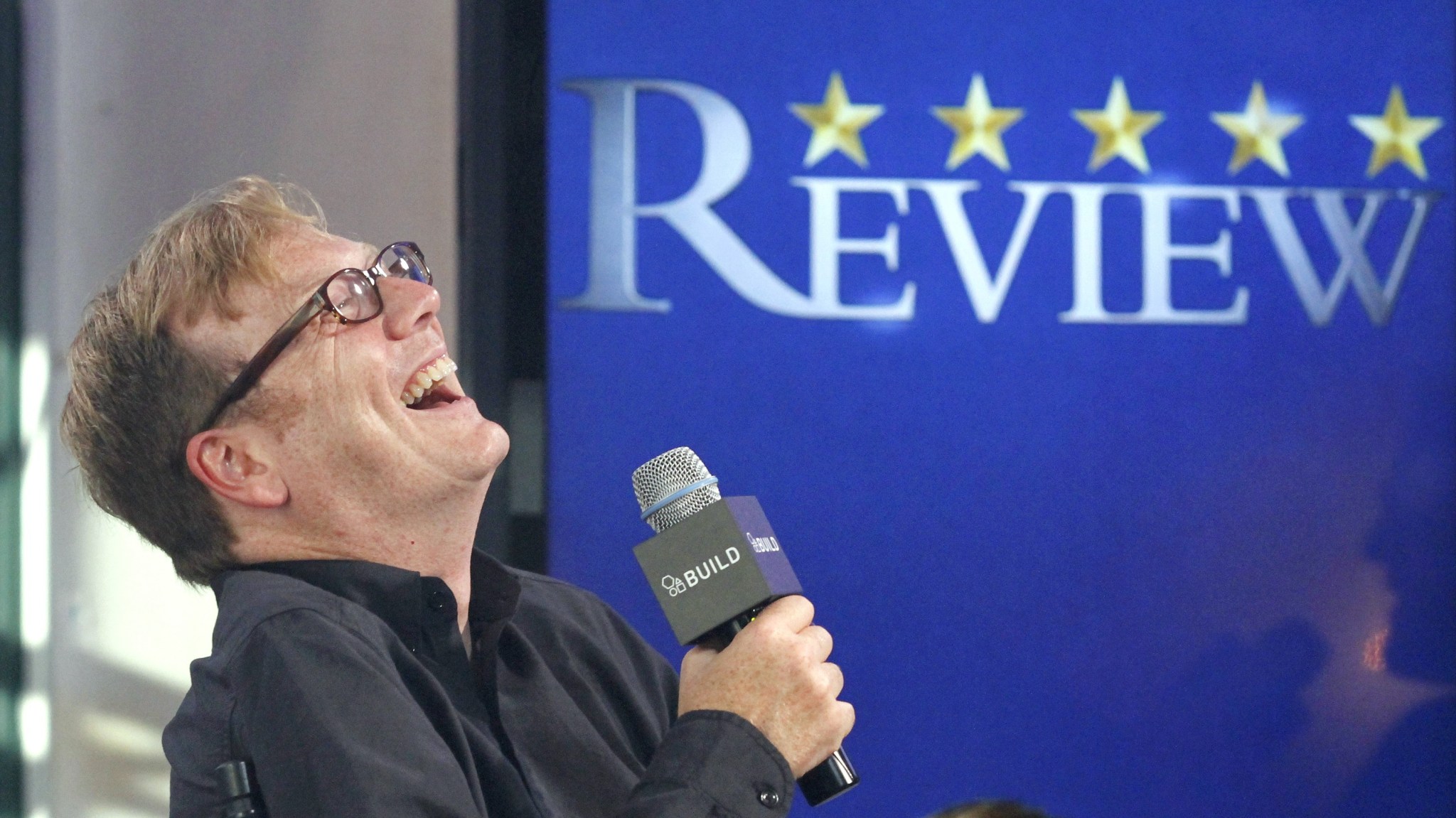 On paper, Review checks off nearly every box that makes a TV comedy take off in 2015 — or, at least, that makes one a full-fledged cult hit on the Internet. The show, which concludes its second season tomorrow night, is, like BoJack Horseman, Rick and Morty, Louie, and so on, what you might call a “sadcom,” mining deep, unflinching exploration of human misery for laughs. It’s formally experimental in a way that allows it to critique other TV. And it features a host of beloved comedy talent, from James Urbaniak (recently of Difficult People) to Jessica St. Clair (Playing House) to the show’s star and cocreator, Andy Daly of longtime “oh, it’s that guy” fame.

Still, as much critical acclaim as Review has received, it’s never quite been a phenomenon with a cultural moment like its fellow glum compatriots. (Yes, it still has many die-hard fans, but it’s not quite at the level of getting BoJacked.) Why not? Even more than most TV we like to claim holds up a mirror (whether it’s the sad or overly dramatic kind), Review is brutally honest about the nature of self-deception and modern obsessions. It’s an interrogation of what it even means to engage with the show as entertainment.

Daly plays Forrest MacNeil, the host of Review — a show where, rather than reviewing any of the other things to which critics usually direct their attention, the host reviews “life itself.” Forrest gets submissions for life experiences, goes out and does them, and then reports on his findings. He’s so deeply committed to being the host of Review that, in the show’s instant-classic third episode, he’s asked to review the experience of divorce and goes through with it, callously dumping his wife of over a decade. This is the first moment we realize the full extent to which Forrest MacNeil is insane, but it’s far from the last.

Review is like many great TV shows in that its appeal boils down to a single character, and like a lot of the most popular TV characters, Forrest has become a kind of single-minded cockroach. But instead of pursuing sex (George Costanza), sex (Don Draper), or, um, sex (Gob Bluth), he hunts for a sense of purpose and intellectual fulfillment through the success of his show. This wreaks havoc on his life, radiating outward from the divorce and infecting everything from his future romantic entanglements to his relationship with his father. When Forrest’s attempt at space travel caused the death of his ex-father-in-law, I thought there was no way he could cause any more oblivious harm. I was wrong.

Like its protagonist, Review is mercilessly committed to the bit. Where other shows can drop their façades for a moment, allowing BoJack a real (if fleeting) epiphany or Rick of Rick and Morty a display of affection for his grandson, Review shows only what makes it on Review With Forrest MacNeil and nothing more, relying on viewers to work at understanding the sadness and pain in the cracks. And where many of the best sadcoms are animated — which makes for a bit of a buffer from depression — seeing Forrest destroy his life without the chaser of cartoon horses or aliens is just too much to swallow. The show builds up a horrible tension between his ideal of criticism and its consequences (including being stranded at sea, burning down a house, and getting sent to prison), with no release.

After this insanity, the prompt of tomorrow’s season finale — believing in a conspiracy theory — seems a little tame. But its simplicity is deceptive, because while it doesn’t have quite the same immediate weight as the recent episode “Murder, Magic 8 Ball, Procrastination,” it pries something loose that’s even harder to pin down. Forrest’s attempt to believe in a conspiracy taps into the same obscene singularity of belief he’s poured into the show, but directed toward an end that is, by contrast, less ridiculous.

Choosing to believe in a conspiracy theory should be hard — you either have faith or you don’t. (In this respect, it’s similar to the procrastination episode, a review Forrest vetoes because he finds it logically impossible to complete.) Still, accepting life as a series of random occurrences is equally difficult. In a rare use of archival footage, the episode rapidly depicts all of Forrest’s mishaps in a short span of time. When the viewer is confronted with every disaster that’s befallen the show’s protagonist at once, the only logical conclusion is that some unseen entity is manipulating him. The episode lends credence to the real-world conspiracy theory of Vulture’s Jenny Jaffe and Gabriel Laks: Review takes place in a kind of purgatory that Forrest is trying to work his way out of through a series of morality experiments.1 In a way, watching this show is its own kind of test of character for the audience, which might explain its stubbornly low ratings.

Even for its most serious fans, Review can be hard to like wholeheartedly, not because it is bad, but because it’s too good. It frequently attacks its natural audience — critics — on a fundamental level, questioning whether they have chosen to devote their lives to a fruitless and absurd enterprise. It does just a good enough job of making Forrest sympathetic (perhaps because he really does believe in his work) that every new mishap and terrible decision hurts. Every episode of Review is another log on the fire of Forrest’s damnation, but in the first season ender (spoiler alert), the show was this close to giving him an out.

The first finale concluded when Forrest, after reevaluating his choices when asked to live as if it were his last day, fled the show to desperately try to win back his wife. The thought that Forrest had learned his lesson over the course of the season and had returned, hysterical and naked, to Suzanne was powerful, and, more than most series finales, felt like an earned ending to the show. But the program’s renewal, with its attendant press conference announcement, revealed a starker truth — Forrest is ludicrously, helplessly, completely devoted to his show. Even though he appears to care about Suzanne, he will never give it up for her.

The similarity between the first and second season finales — both question the foundation of Forrest’s life — helps clarify a sense of exhaustion that might keep people away from the show. “Perhaps it would be nice to think that life’s misfortunes aren’t simply random,” Forrest tells us in obnoxious voiceover, “but are instead the work of a villain who can be smoked out and defeated.” But what Review tells us again and again is that he does it to himself (as we all do).

The closest thing the show has to an actual villain is Grant, Forrest’s producer. As played by Urbaniak, Grant acts at all times not quite out of malice, but out of an indifferent need for good ratings. (And, just maybe, because he, too, believes in the program.) Grant is a gremlin coaxing yet more calamity out of Forrest, because without suffering, there’d be no show. That mirrors our own insatiable need for drama, both onscreen and in our humdrum, everyday lives. Grant expresses the truth that even Forrest’s worst moments in the show can be transformed into something too hard to look away from. That’s not an evil conspiracy — it’s just good TV.

Least Likely: Off Broadway Phenom Annie Baker Is Confounding Some But Charming All the Right People