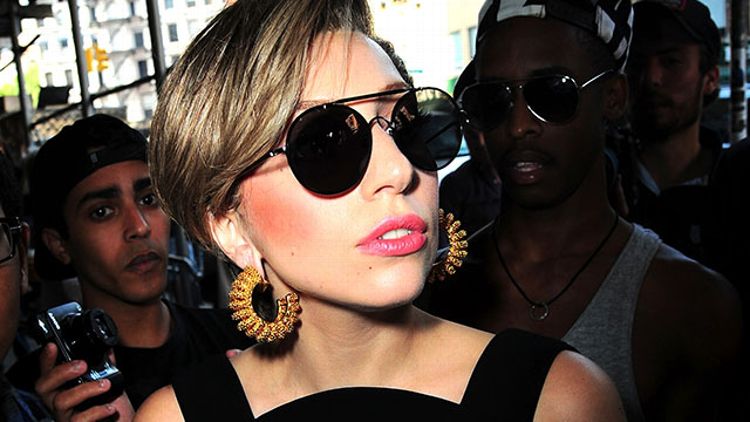 The Little Monsters have had no shortage of work to do in the week since Lady Gaga’s “Applause” was released on iTunes, and this weekend they industriously applied themselves to a new cause: Burn Perez Hilton to the ground. Perez, Gaga’s former bestie before some as-yet-undefined major falling-out, has been subtly-to-overtly shading Gaga on his blog for weeks now, clearly declaring himself #TeamKaty in the Great Pop War of 2013, which is, as other unfortunate tweeters have learned, more than enough to merit a barrage of hate speech. But that was nothing compared to what transpired this weekend, when Perez was spotted by a Gaga fan at her apartment building in New York and the DIE PSYCHO STALKER DIE (that’s the PG version, anyway) tweets began to fly.

Perez explained in a statement that he was taken to Gaga’s building by a Realtor while apartment hunting in New York City (hallelujah — YOU take him for a while, guys), and Gaga has confirmed that she was across the country in Los Angeles during his visit anyway. I personally think it is equally likely that Perez was just doing some innocent apartment shopping as it is that he was seriously toying with the idea of such an antagonistic living situation. At the very least, I’d be willing to bet that Perez was aware he was in Gaga’s building. But I’m more interested in Gaga’s initial reaction, which has since been deleted from Twitter but which started a just-now-tapering-off Twitter feud, and will live on in Google image search forever. It’s only fair to mention that Gaga posted a statement this morning calling off the witch hunt, but she’s been forced to deliver similar fan discipline in the past and it never really seems to do much good. Let’s skip over the obvious question of who poses the biggest threat to Lady Gaga, Perez Hilton or the stan that just happened to be hanging out in the lobby, voluntarily monitoring the visitors, and talk about the more recent general phenomenon that is Lady Gaga, Beef Hunter.

The genius of the theme of the promotional cycle surrounding ARTPOP, Lady Gaga’s long-delayed but now impending third studio album, is that it bakes in an excuse for Gaga to act completely neurotic and desperate. Gaga’s previous albums can’t really be said to have individual themes (though “being famous” is a strong through line) because Gaga gave us the template for the modern pop star as pastiche. The theme is the look, and the look is going to be different every time you see her. The Lady Gaga experience is akin to speed-reading the Wikipedia entry on David Bowie. Other pop stars have followed suit in the last five years, seemingly trying to one-up each other with bigger and more audacious looks on every red carpet while still maintaining the old-school idea that a pop star needs to have a reliable persona for fans to identify and establish a relationship with. Nicki’s a tough, slightly unhinged boss bitch. Katy Perry is a parody of a pin-up with a heart of gold. Ke$ha is That Girl. But Lady Gaga is … Lady Gaga. A hologram of a chameleon — it keeps changing, but we never really had solid proof it was there to begin with.

The other important difference between Gaga and the aforementioned ladies is that, crucially, the latter all have a sense of humor, which they exercise on a regular basis. Gaga has always been a little too wrapped up in her concept du jour to have time to wink at the audience, and for a while that was part of her original, singular appeal; we couldn’t believe that this woman was dressed like that and doing that in her video, AND it wasn’t a joke, AND they were playing her song on KIIS. But she has really doubled down on the self-seriousness with ARTPOP, declaring herself the official liaison between the Artforum crowd and the Us Weekly set and making contemporary art references that probably leave a lot of her younger fans scratching their heads. She isn’t content with her legacy as a semi-conceptual pop artist; now she wants to sing about how she is a semi-conceptual pop artist. It’s a much harder sell than Perry’s bubbly, familiar (a little too familiar?) “Roar,” which shot out the gate much faster than Gaga’s single “Applause” when the songs were released simultaneously last week.

The traditional wisdom is that very famous people should never acknowledge the negative criticism they will invariably invite, that there is something regal and respectable about staying above the fray. But because “Applause,” and I’m guessing ARTPOP as a whole, are about the shaky, thoroughly parched edifice of pop stardom, Gaga is piling on the sad-clown makeup and dressing herself in beef again. At age 27 she can’t seem to wait for her Norma Desmond phase, and wading into her Twitter stream these days is like finding yourself trapped in the cigarette-stained parlor of an aging has-been, shifting uncomfortably on a plastic-wrapped regency couch while she delivers the same speech three times in an hour about how those Hollywood know-nothings never understood her, but she will always be a staaaah:

"To the critic who speaks before they bang the gong: a fool you are I say! I've not even begun my song!"

She’s seeking out drama like a missile, haughtily calling out “the critics” before they’ve even really had a chance to evaluate her new material, in a psychotically defensive way that Beyoncé would never. The character she has assumed for ARTPOP is shameless, insecure, and all too eager to play the victim, especially considering she was Forbes‘s highest-paid celebrity under 30 this year. In a way, that makes the whole conceit even more interesting. Gaga made her name being radically unchill in her approach to her aesthetic and public presentation; she’s continuing that strategy in the maintenance of her superstardom.

Lady Gaga released her video for “Applause” today in a unusually short turnaround from the release of the song. Gaga’s music videos are arguably more essential to her persona than her songs are, so it makes sense that the new clips give the song a depth and excitement that felt like it was missing from that first rushed debut. The lush black-and-white shots are gorgeous, and Gaga’s frequently bare face is vibrant and startling. She even smiles a little. She’s still using gay men as props in the same way that Miley Cyrus uses twerking girls, but this time the focus, as befitting the song’s lyrics, is on her insatiable, undeniable presence. Lady Gaga may be trying to get meta about her thirst for attention, but when it comes time to deliver, she can still attract it the old-fashioned way.

The Kardashiad, Part 23: Have You Ever Had Sex in Exchange for Money?