Kris and Bruce Jenner Part Ways, and Other Evidence Love Is Dead From This Week’s Tabloids 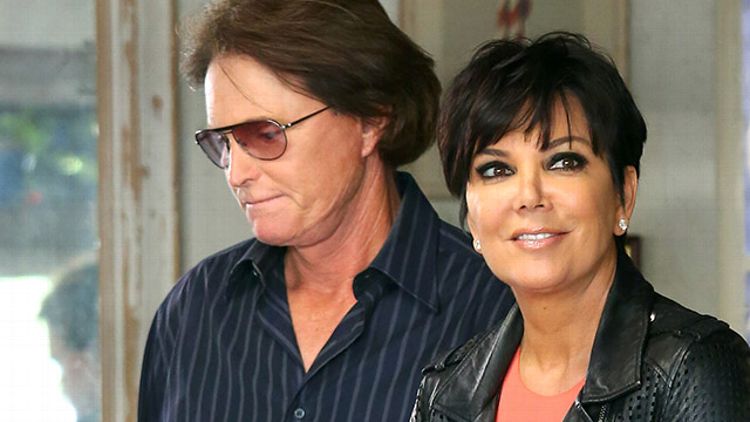 Kris and Bruce Jenner Split Up: The Kardashian klan is kut apart with the news that Kim Kardashian’s mom, Kris, and stepdad, Bruce, are over, for good. And here I thought it was just a plotline on the show! Honestly, how can even they tell the difference between their real and scripted lives at this point? Kris klaims “We are happier this way.” She gave the exclusive to Us, so don’t expect a lot of dirt here. They’ve been split up for a long time already, as you might have guessed from Bruce living separately in a beach house all summer. “Amid all the Kardashian crises over the past 12 months — Kim’s difficult pregnancy, Kourtney’s paternity test drama, Khloe’s marriage hell — Jenner has hidden one of her own: Her 22-year union to Bruce Jenner ended a year ago.” They’ve been living apart for as long. Kris says “there is no animosity” and that they remain “committed to our family.” They are still friends, and Kris says “I will always love him, but we are no longer a couple in that way.” Bruce says “We will always love and respect each other and be part of each other’s lives.” Other sources verify that the split is fairly amicable. They haven’t set up plans to divorce, because there is no prenup. According to Kris, “It’s a modern-day situation.” Watch out, Kylie and Kendall are totally going to Parent Trap you! “Kris discovered her gift for management when, newly divorced and near penniless, she fell head over heels for a down-on-his-luck ex-athlete who stored his 1976 gold medal in a sock drawer.” Kris said “I knew we had to tell his story to a world that had forgotten it. We wanted to be champions again.” Kris is Kenny Powers? Makes perfect sense. Why bother lying about the split? “Part of the success of the show is that they’re this perfect family.” Really? I don’t know about that. Even friends thought Bruce and Kris’s bickering was just part of the show. Kris Jenner “Instagrammed a bikini shot just hours after her 17-year-old did!” Watch out world, here comes Kris Jenner’s postmenopausal-life crisis! It’s gonna be intense!

Scarlett Johansson: “I was a big song-and-dance type of kid — one of those kids with jazz hands.”

Norman Reedus Loves 80085: “When I was a kid, 3 was my favorite number because if rotated, it looks like a pair of boobs.” Also, “My favorite thing is to lie down,” and “My best friend is my cat.”

Gwyneth vs. Charlize: Both blonde actresses joined Instagram this weekend, but a poll of Us’s readership said that 78 percent of respondents would rather follow Charlize.

Robin Williams on Relapsing: “I walked into a store and saw a little bottle of Jack … A week later I was walking around with 10 little bottles … I sounded like a wind chime.”

Rihanna Wants Kids: “I look forward to the day when I’m gonna be a mom. But I’m nowhere close. I don’t even have a potential baby-daddy!” Everyone volunteers?

Miranda Kerr: “I collect underwear from my travels.” OK.

Chelsea Handler Is Single Again: After splitting with hotelier Andre Balazs again, in a twist anyone who’s seen the Samantha and Richard on Sex and the City may have seen coming. Handler says “Maybe I’ll date a woman!” I think Lohan’s single?

Tom Hanks Loves Rita Wilson: “Every day is a blast with Rita Wilson,” sayeth Tom. Rita says “One of my birthdays he rented a riverboat. He took me under a moonlit sky down the intercoastal waterways out of Savannah, Georgia. It was spectacular.” If these two ever break up, love is doomed.

50 Cent’s Teenage Son Embarrassed By Him: “I’m at that point where, like, I’m not really that cool. [His son Marquise Jackson says,] ‘You ain’t that cool. You’re my dad, actually. Could you leave?'” Still a way less embarrassing dad than Diddy.

Misc/Etc: “SURPRISING STAR GANGSTAS” “flattering corset” “perfectly carved hourglass curves” “she had the urge to share” “a sense of humor about the daddy drama” “I’m a huge New York Knicks fan” “I eat a chocolate bar almost every night before bed” “I own about 50 masks.” “I think apple pie–flavored gum is a revolutionary concept and I love it.” “how to poach an egg” “Men in capri pants” “He’s like this really strong, big guy in life” “surprised Tiger Woods with a baby squirrel” “No boys allowed!” “WELL, HELLO, GIRLS!” “Alec Baldwin picked up a drying rack” “selfie-loving kids” “But the ‘Ginger Fox’ proved hard to resist”

Kris Jenner Is Already “Dating” Britney’s Ex Jason Trawick: It’s up to you to decide whether you think these two are actually boinking, or if it’s just an elaborate publicity stunt. Knowing Kris, it’s probably both! “Kris, 57, and the much-younger Jason, 41, enjoyed a romantic dinner at Sugarfish sushi restaurant in Calabasas.” THESE PEOPLE NEVER LEAVE CALABASAS. “They had a private table in the back and kept reaching across it to rub each other’s arms. Kris drank white wine while Jason had shots of sake. Throughout the meal, Kris told Jason he was sexy while they shared edamame and she hand-fed him sushi.” YO. “Kris is diving into the dating pool” and she “has always wanted a younger man who is more exciting than Bruce. She thinks Jason is sexy. They’ve been talking a lot on the phone and through flirty text messages. She’s like a giddy teenage girl with Jason.” She’s like a giddy teenage girl with EVERYONE. Kris is behaving just like rich and powerful entertainment industry men often do, so as much as I want to hate I can’t. Sry bye!

Queen Latifah Trounces Bethenny: “Bethenny Frankel may want to pour herself a tall, strong Skinnygirl cocktail. The reality star is reeling after her chat show, Bethenny, was trounced in the rating’s by Queen Latifah’s.” Look, Bethenny, you’re a reality show TV star who already lucked out once with the low-cal margarita bit. Stop pushing your luck. Queen Latifah is Queen Latifah. Of course she’s going to win. Latifah also has “an edgy, fun set designed by Lenny Kravitz.” Bethenny is “holding crisis talks in order to figure out what Latifah has that she doesn’t.” Talent!

Jennifer Lawrence Punches Charlize Theron: “Someone was telling Jen that the set was haunted, and right then Charlize crept up, grabbed her from behind and yelled ‘Boo!’ But Jen’s Hunger Games training must’ve kicked in because she instinctively elbowed Charlize full force in the stomach!” Story is 2 good 2 be true.

Jessica Simpson Won’t Tolerate Hotties: “Want to work for Jessica Simpson? Well, attractive women need not apply.” Simpson, 33, “is so insecure about her postbaby body that she’s firing female staffers so her fiancé, Eric Johnson, won’t be tempted to stray. Jessica is away a lot for work, so that leaves Eric at home with the kids and staff. She doesn’t want to have any pretty girls around him.” Good thing there are no pretty girls anywhere else! Sounds like a foolproof plan; good luck!

Jodie Foster Dating an Ex of Ellen DeGeneres: Los Angeles is a small town. Jodie is dating “photographer-turned-actress Alexandra Hedison.” Ellen thinks Hedison “is bad news,” because she “used Ellen for industry contacts.” Foster, who split with her longtime partner Cydney Bernard in 2008 after 15 years, doesn’t care. “She’s blinded by love. She won’t listen to anyone.”

Owen Wilson’s Married Baby Mama: Owen has been sleeping with his personal trainer, Caroline Lindqvist, on and off for years, and she is now six months pregnant with his child. But she’s already married “to a noted Beverly Hills plastic surgeon.” Owen and Caroline met in 2003 at a party and hit it off immediately. “Though the couple’s bond was real, it was the notorious playboy’s refusal to commit that sent Caroline into the arms of her husband, Ritu Chopra, whom she married in 2004.” Despite marrying Chopra, she kept seeing Wilson. “Ritu had no idea about her history with Owen, so he was completely blindsided by the news of Caroline’s pregnancy.” Owen already has one child, 2-year-old Robert, with ex-girlfriend Jade Duell. “Unwilling to settle down, Owen split from Jade just five months after their son’s birth.” This time, he’s not even going to pretend. “Owen has never gone above and beyond for Caroline. She desperately loves Owen, and his womanizing breaks her heart. She would love to have him all to herself, but she knows it will never happen.” They meet up “once a week if he has the time for her. Caroline is happy he has the money to support the baby, but she is devastated that Owen won’t be with her.” At least she finally filed for divorce from her husband.

Misc/Etc: “Too raunchy for suburban moms, but too old for Millennials” “Something wicked this way comes!” “rapper-turned-actress” “She likes that her character goes against the grain and doesn’t have to be an open book about who she’s sleeping with” “marijuana and MDMA, or Molly” “NOT SO LOL!” “put girls half her age to shame” “looking in desperate need of a sandwich” “taking style tips from farmers” “white-knuckle space flick” “renamed Benjamin Stacks” “showed off her new boytoy” “He and Heidi are dying for kids!” “I mean, we’re just such a dynamic group of people” “Swimming with pigs” “Russell Brand flashed a wad of cash stored in the front of his printed yoga pants” “U2 singer Bono stopped to use a Porta-Potty” “at the racetrack” “They are competitive and get excited when the other does poorly.”

Kris Jenner’s Sister Karen Speaks: “You know what drives Kris? Power, power, power. And money. Fame and fortune ruin people. She is a workaholic, a hustler. It’s called wanting power. It’s Gucci purses, Bentleys, all the things I don’t care about that she does,” says her sister Karen Houghton, a part-time nurse. “It’s an addiction, and it’s because you are unhappy. You do these things because there’s a hole that’s not filled.” They grew up blue-collar in Claremont, California. A random psychologist says “Growing up poor can make you hungry, make you want a better life than you had as a child. But what’s interesting about Kris is that as much as she gets, she’s never satisfied.” I mean, who is? “She wants more, more, and more.”

Rihanna Loves Princess Di: “She was gangsta with her clothes. She had these crazy hats and oversize jackets.” It was the ’80s. Everyone had those!

How Many Times Does Britney Say “Bitch” on “Work Bitch”? 20.

Kanye Is Changing Kim’s Style: “Kanye has a plan. She’s going to be transitioning to Kanye’s dark monochromatic colors.” She is his beautiful twisted fantasy! “She might think some outfits are ridiculous, but she’s willing to wear whatever Kanye wants, to make him happy. She’s obsessed with being his perfect woman.” We have noticed. They really are kind of a perfect couple.

Misc/Etc: “Her breasts are fuller” “SAD LOVE LIFE” “look older than her 15 years” “two empty champagne bottles, a spoon with drug residue, and a used syringe” “You will see real tears onscreen” “You are a mother now, your breasts don’t need to be completely out” “a whiskey-drinking chain-smoking fool.” “clad in a black thong and his signature yellow tank top, boots and a feather boa” “I’ve come to see my muscles as just kind of a movie prop” “dons cowboy duds and wears a wacky wig” “I wish there was a Chanel emoji!” “New Mom Kim TOO SEXY, TOO SOON?” “Have you ever had a dream that made you afraid? I’m living one.”