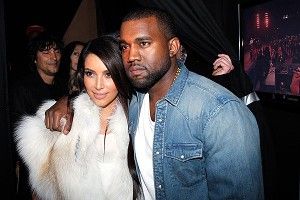 When we last checked in on KimYe, the duo was entering that tenuous stage, inevitable in every fledgling young couple’s relationship: the reality TV debut. It was adorable. On this season’s premiere of Keeping Up With the Kardashians, as Alex Pappademas helpfully explains, “Kanye shows up. He’s less all-caps and more aw-shucks than we’re used to — smiling, mumblingly un-mic’d, answering fashion queries from Kim while staring at her feet. (She asks, ‘Don’t you think this clutch is too busy?’ He does not.)” So, yes, clearly, things were going well. But that was nothing compared to the brazen displays of adoration we’re now witnessing. Here are the facts: While the rest of the world hasn’t yet heard it, Kanye has written a song called “Perfect Bitch,” and that song is about Kim, and Kim thinks it’s really, really sweet. Of course she does.

Kanye premiered the track this weekend at a club in New York City. He rolled in with Leonardo DiCaprio, sat down at a table full of models and also Maxwell, and then plugged his laptop into the sound system and started dropping jams. Reports the New York Daily News, awesomely:

[T]he standout track of the night … was a song that included the chorus “My perfect bitch.” Our source says the song is about his current and former girlfriend. “(He raps) verses about his search for the perfect woman and how he has now found the “perfect bitch,’ ” says the insider, adding that there are a number of descriptions in the song that reflect the looks of the curvalicious Kardashian … “The crowd was on their feet,” says the first source … West returned to the VIP table to high-fives from DiCaprio and pals.

The track samples early-20th-century cantata “Carmina Burana,” which also showed up on Nas’s “Hate Me Now,” and it’s not clear if it’ll show up on the G.O.O.D. Music album Cruel Summer, if it’s earmarked for the next Kanye solo album, or if we’ll never hear it at all. (Nooooooo, etc.) What is clear, though, is that the track is about Kim. Because Kanye tweeted (then deleted) this: “I wrote the song Perfect Bitch about Kim.”

Some were perplexed by the use of the word “bitch.” Is this any way to speak of one’s lady? But Kim, TMZ is now reporting, understands Kanye’s language:

Kim is telling friends, “I’m honored. I love it,” adding, “I know he doesn’t mean it in a negative way when he says the word ‘bitch'” … Kim feels great about it, saying, “The song talks about how he was with so many other girls but could never find the right one until he met me.” Kim is also real pleased about the way Kanye describes her body in the song.

Well, go ahead and shut it down. They’re clearly goddamn soul mates.