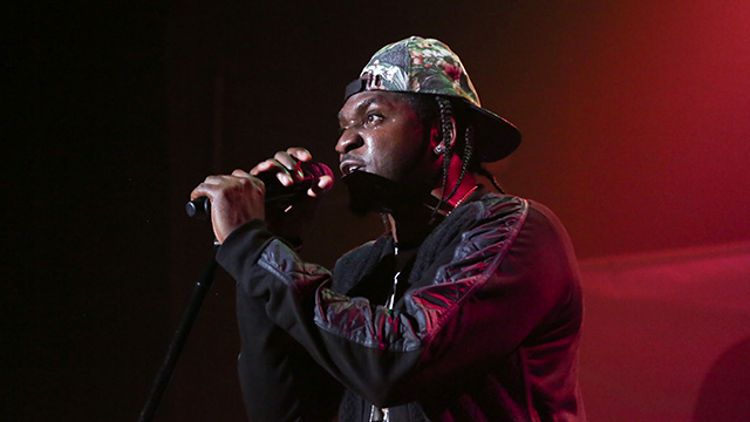 In the 11 years that I’ve been faithfully listening to Pusha T, not once did I think he’d ever become one of our brightest stars. There have been glimpses of it for a long time — many of which have contributed to his lengthy career — but I never thought they’d be anything beyond that.

But I never knew why. The talent has always been there. The Clipse albums Lord Willin’ and Hell Hath No Fury are both important rap records. And during this era, he continued to deliver above-average verses that separated him from much of the pack and occasionally even from his brother/fellow Clipsian, Malice.

He also proved he had the charisma necessary to become a star. Even when baggy jackets threatened to engulf his entire upper half, he still carried himself like someone who believed he mattered.

There was, however, something about watching him rap that slightly bugged me. It wasn’t a bad thing, but it gave off the impression he was trying too hard or trying to get you to notice him.

It’s one of the things that separates Yasiin Bey (Mos Def) and Talib Kweli. Both men can rap circles around most of their peers, but the former’s body language is always very deliberate and controlled, while the latter often flails about.

Pusha’s issue is that he’s a physical storyteller who attempts to take you on the journey of a verse with his arms. But oddly enough, this act of guidance often backfires, because the only thing that truly takes away from his story is his unwillingness to be still.

It took a lot to make Pusha not cool. But at times, this would do the job.

Pusha as a body in motion existed in his Clipse years and continued through his early solo years and into his induction into the G.O.O.D Music family. While slightly more controlled with age, those Pusha arms were still on full display for the biggest night of his career: the 2010 MTV VMAs and the inaugural performance of Kanye West’s “Runaway.”

Pusha hit the stage halfway through the performance in an oft-referenced (by Pusha) salmon-colored getup, and delivered a great verse. It had to be great. There couldn’t be any flaws in this performance, Kanye’s official career resurgence after the 2009 Taylor Swift stage bum-rush. And Pusha was the perfect sidekick. He came in, looked good, sounded good, and then got out of the way.

But just like the ballerinas (who also sported a shade of pink), he was a prop for Kanye. He succeeded that night because he’s a performer. But, again, there’s a difference between a performer and a star. Kanye was the only star on that stage in 2010. Pusha simply gave a solid, appropriately animated, gesticulatory performance, and then was gone.

In the years since that performance, he has always found a way to stay in the spotlight. But during the lead-up to his recently released solo album My Name Is My Name, I was worried this might have been the beginning of the end. Perhaps doing a full album was potentially biting off more than he could chew. He’s always been a great rapper, but you got the sense from Pusha that he felt it was finally time to try to be a star.

Now that the album is out, it’s clear that he’s as good as he’s ever been as a rapper, which automatically puts him among esteemed company. So as I awaited his set last night at NPR Music Presents in New York City, which he was headlining, the only question in my mind was: “So, is he a star?”

I knew the songs would sound great, because the album is great. And if he played some of his featured verses or even some old Clipse songs, that would make the show that much more special. But what I needed to see with my own eyes was how he behaved. How he moved on the stage. How he carried himself. And, ultimately, if that had any impact on the music.

Within 10 minutes, during two of which I had my hand over my mouth in disbelief, it was clear something major had happened. And, for the first time, I finally knew what Pusha had been missing all of these years. After walking back and forth on the stage, alternating spots with his hypeman, he took center stage, put the microphone on the stand, grabbed it with both hands, and began rocking back and forth while rapping every lyric perfectly and passionately.

Pusha finally had somewhere to put his hands. And at that moment, for the first time, Pusha T felt like a star.

I wasn’t simply watching the G.O.O.D. Music golden child anymore. This was a rock star onstage. He didn’t have to lure us in with dramatic theatrics. His words and his facial expressions and the music and the confidence that oozes from that physical minimalism did the job. I felt like I was watching Eddie Vedder talk about putting Numbers on the Boards. It was confusing and exhilarating to watch play out onstage.

Yes, occasionally one of his hands would leave the mic to do something, but it would always come back. For the most part he was behaving like a front man for himself. For the duration of his show, he was in full control. Not a word was lost and not an eye was distracted by other things happening in the room. It was a great night to be a fan and an even better one to be Pusha T, star.

Filed Under: G.O.O.D. Music, Pusha-T, We Went there